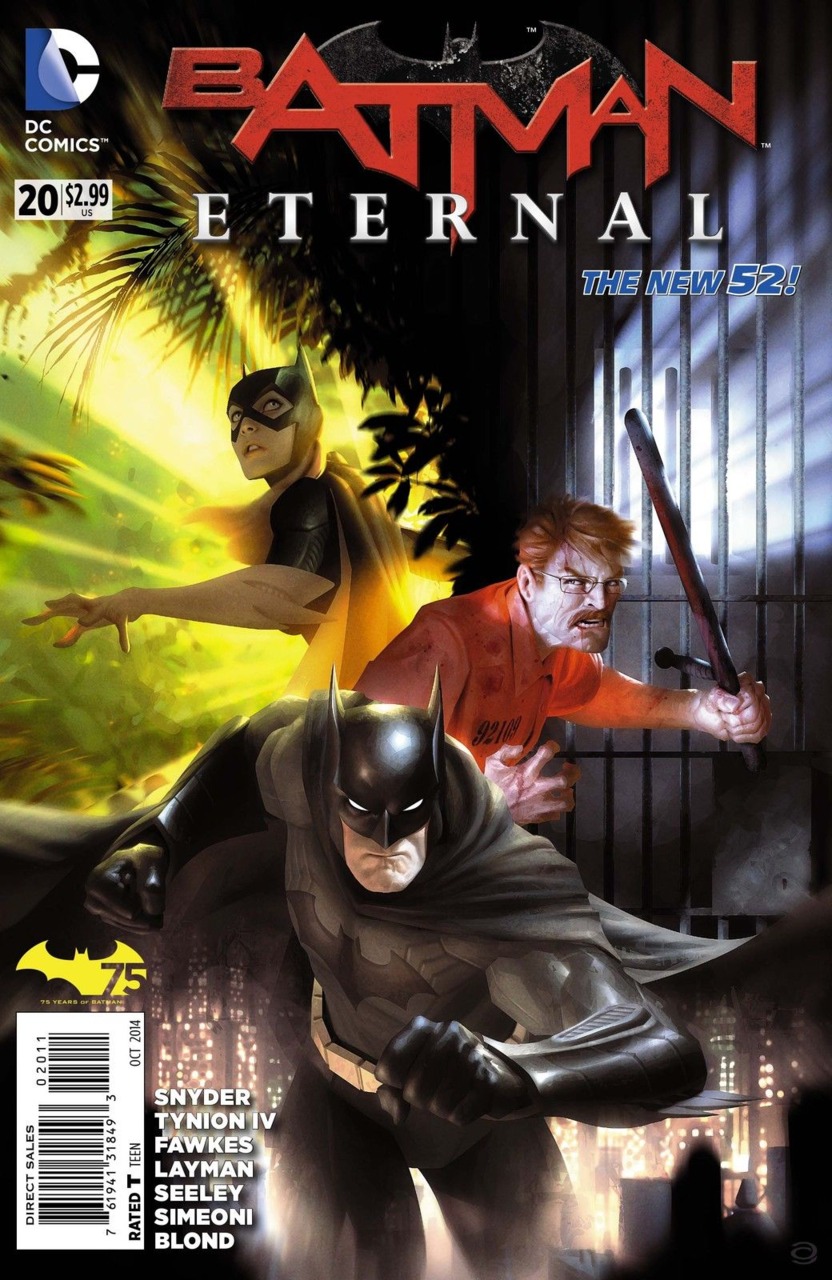 We are now twenty issues into Batman Eternal, and I’m starting to feel some fatigue in reading this comic. It just kinda hit me suddenly. Now I’m not saying this issue is bad, because I did enjoy it. It’s just not hitting on the right cord here, with me right now.

Did Tim Seeley deliver a solid ending to his mini arc? Yes. Yes he did. In fact, this was much better than the previous two. In issues eighteen and nineteen, he really seemed to drag the pacing of the story down to fit it into three issues, when it probably would have been better accomplished had it been done in just two. I get it, though. Weeklies are tough. They are a completely different animal than a monthly comic. It’s hard to get people invested to buy a comic four to five times a month, even if it is the best thing on the shelves. Also, instead of telling a large story in an episodic fashion, you are basically following the format of a TV show. Constantly getting new writers and artists, just as you would writers and directors for a TV show. Things aren’t always going to be smooth, sometimes you’ll have differing ideas. We keep getting pulled into different directions, meaning, we don’t see our character’s situations even remotely resolved by the time we move on to someone else. However, these guys have done a great job of rotating the stories inside their own, and Seeley does better in this issue than he has in past issues.

Emanuel Simeoni impressed me in these past two issues. He captures the spirit of Andy Clarke (who started this arc) without copying him. His attention to detail is fantastic, but he also adds his own flare to it by having a rough set of inks to go along with it. Giving it a brushed look, that gives it this raw feel to it all. And of course, having Blond stay on for the colors helps it all have a nice, cohesive feel as well.

Dr. Flasario (yeah, I think he sounds like a villain from the Incredibles too) is running away from Batgirl through the jungles of Brazil. Last issue, Batwoman found out he can make people hallucinate, and she gives him a taste of his own medicine. Batgirl goes after him, after realizing that he temporarily controlled her, as well as her father, which led to the big train accident. However, by the time Batgirl reaches him, he is dead, and a sword is found stuck in a tree. Looks like it belongs to Lady Shiva, or another member of the League of Assassins. She returns to see Batwoman and Red Hood releasing the captive children to their families, and Jason tells her that they found evidence, and blueprints on the plan to mess with Gordon’s head. And soon everyone will know that Gordon is innocent.

Meanwhile, Batman, Bard, and Croc fight the Ten-Eyed Man and his monsters as they try to sacrifice a girl by sending her into an interdimensional portal. They save the girl just as the place begins tumbling to the ground thanks to the portal. Where this leads, we don’t know. Once in the clear, Bard attempts to arrest Croc for the murder of a few police officers (see Killer Croc villains month issue for more details), and Croc places trust to protect the girl, and collapses the tunnel to keep Bard away from him.

Also, Gordon is trying to do his best Batman: Arkham Asylum attempt to reach the prisoner takeover, and protect the guards they have taken hostage. He uses all the weapons at his disposal: a floor mop, a fire extinguisher, a bottle of nitrogen… And almost makes it through before he is taken down by some prisoners. When they are about to kill him, suddenly Gordon’s roommate, Leo appears, killing the prisoners, and saving Gordon and the guards. Only his name isn’t Leo. It’s Calabrese. Rex Calabrese. The Lion… Who? I had to do some research on this one. This was the guy we’ve been hearing so much about. The previous Gotham crime Kingpin before Flacone. The one who believes in the natural order, and once your time is up, it’s up.

Once everything clears up, Gordon asks Rex why he risked exposing himself to help him. He says he does it because he wasn’t there for his daughter, and he didn’t want that for Jim and his daughter… I think it’s pretty clear who this guy is now and who his daughter is. The father of Selina Kyle. And it fits pretty well. “Kingpin” of Gotham, “Lion” and his daughter is the “Cat”. It all makes pretty good sense. And I like the change so far.

And we close with Stephanie Brown suiting up as the Spoiler to ruin her father’s plans herself, since no one else is responding.

A slow start to this story, but it ended strong.