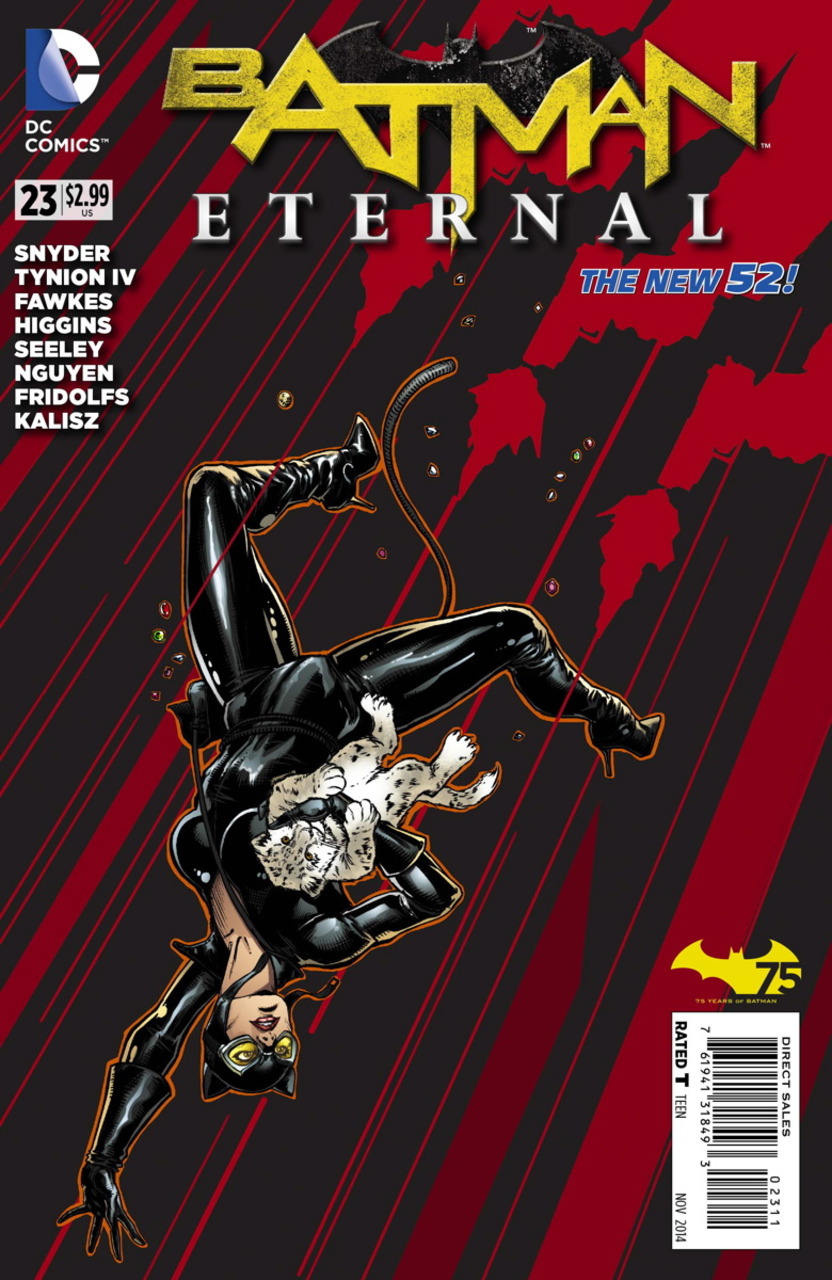 Since issue twenty-one, I don’t know that we will have another issue live up to that anytime soon. It may be awhile. Here, we get Tim Seeley back on the script. I feel like his story is good, but his dialog seems kinda sketchy at times, and some of it is just plain necessary. Maybe the guy just needs to trust his artist a little more, as we can understand the conviction being told through the facial expressions instead of him spelling out everything.

I think  it’s kinda weird how Catwoman is ALWAYS looking to save a cat. So much so, that it makes me wonder why Batman never saves any bats. Really, should she be so obsessed with them?

And then we get to know Jade. The girl who was  saved by Croc, Batman, and Bard. She’s back into the mix, and seems to be an important character, being dragged into the mix between Selina and her father. After making a few prison-rape jokes, which made me uncomfortable, I’m not really feeling her character.

It was really neat seeing the interaction between Selina and Rex. This father/daughter relationship works better than the Falcone one pre-52. He tells her that the criminal world needs someone in charge, and he wants her to do it. We’ve heard this guy believes in the natural order, and it seems like the guy means it, by asking her to take over instead of him. He believes that she is better suited for it because the game is more important than the people, to her. Selina leaves, and takes Jade to Dr. Leslie Thompkins, as it seems they have a history back in the day.

Batman beats up the Architect with a piece of rebar, kinda brutal, when Julia sees something happening on the Batcomputer. Gates has messed up the fault lines, and causes a major earthquake. Hush is upset that the tower didn’t come down, but I’m not really sure why it matters. And we close with Bard meeting up with Mayor Hady convincing him to declare Martial Law. So I guess this is when the SWAT teams and abusive cops are going to come into play, as seen in Batman #28.

Dustin Nguyen’s art is awesome, as usual. He has a way about capturing emotion, and tell the story without the writer having to convey that emotion through text, which I felt Seeley didn’t take advantage of. All in all, this was probably the best issue of Catwoman we’ve had in a vet long time. I really feel like I got to know the character a little bit, here. Hopefully the new creative team can build on this.