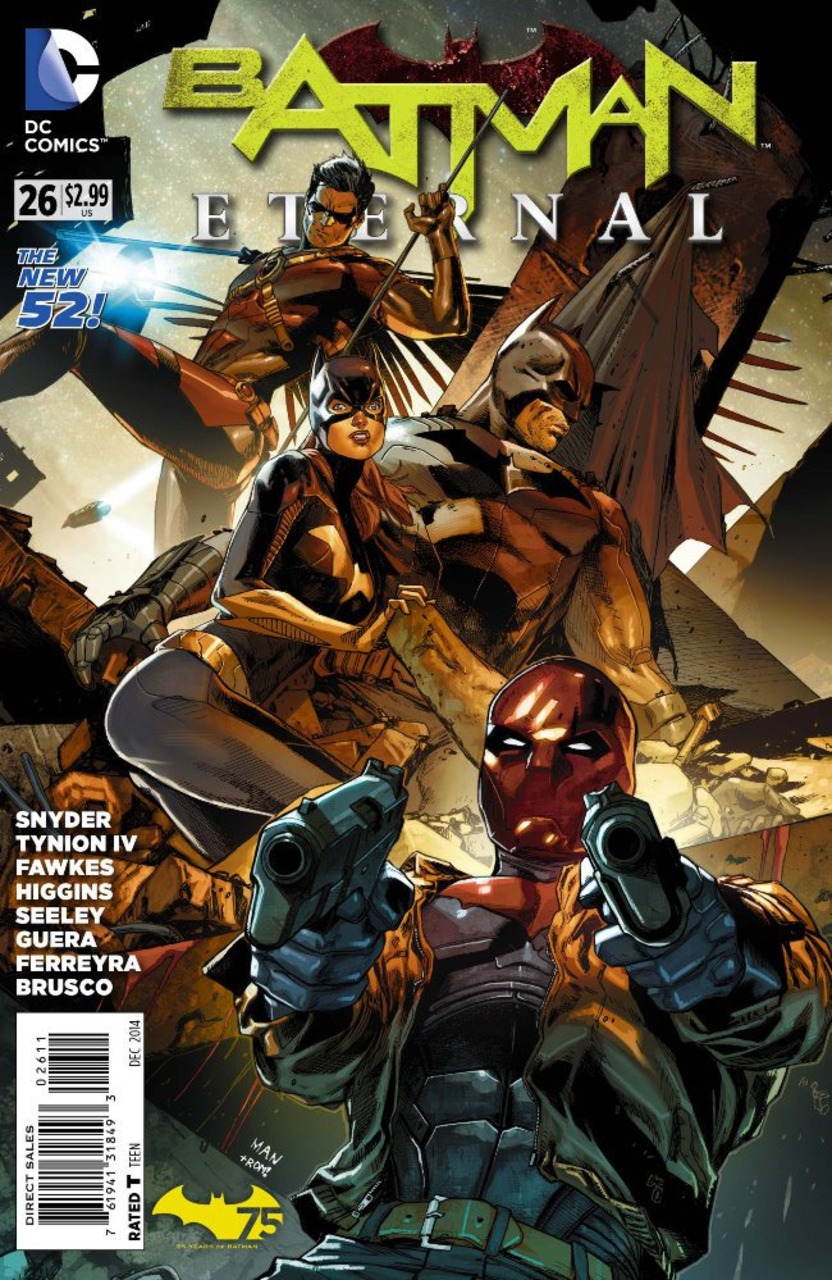 As I look back over this issue, I feel… disappointed?… I don’t know. I didn’t like this issue, and I’ll get to that later. It just comes down to the point where, although I appreciated the movement and progression Tynion created, I don’t like the feeling I get when the story is over.

Guera does the art… Again. And I’m not going to rehash what I said last issue, but it’s not the best looking art out there.

Julia patches up Bruce, and while she’s not as good as Alfred, she gets the job done. Bruce is about to go back out, when Tim, Jason, and Barbara stop him and demand answers. Why isn’t Gordon out of prison? What happened to Alfred? What’s with this nanotechnology virus? Why so many riots? Bruce answers, “Hush.” And they ask how to help. They leave to settle the riots.

Bard is holding a press conference, establishing Martial Law, and a curfew of 9:00 p.m. Spoiler is listening in on her smartphone, while catching a ride on a bus to the prison her father is being held. She breaks in, and beats up some cops, just so she can post the last part of his plans right in front of him. This seems pretty lame, and kinda villain-ish to me. However, this backfires, and a bounty on her is posted instead – $100,000,000.

Batman and Julia head to the hospital to see Alfred, who has gained a lot of weight and aged a lot since being injected with fear toxin – which apparently is NOT approved by the FDA. He tells her why he is so afraid of Hush.

Now, this origin is worse than the original. Some liked it, others didn’t. I did enjoy it, but I did see the downfall to telling a story of a childhood friend we’ve never heard of before. This is just bad. New 52 Tommy clearly needs to be in an institution. He is obviously insane. He killed his parents so he could be the same as Bruce. In high school, he told girls he was Bruce Wayne. This takes away the mirror to Bruce that he was in the past. Tommy wanted money. He wanted power. And that’s why he changed his face to look like Bruce. For power. Here, he just wants to be Bruce out of some freaky obsession with Bruce. And when Bruce became something more, so did Tommy.

They both head back to the cave, trying to figure out where Tommy would be, when we see what’s going on at the hospital… Alfred is gone. Tommy Elliot has had him taken to a facility that will suit his needs – Arkham Asylum. Where Joker’s Daughter has found him. Could this be the reason Arkham is moved to Wayne Manor? So Bruce can keep watch and protect Alfred? Or does Tommy do it to torment him? We will probably find out next week.