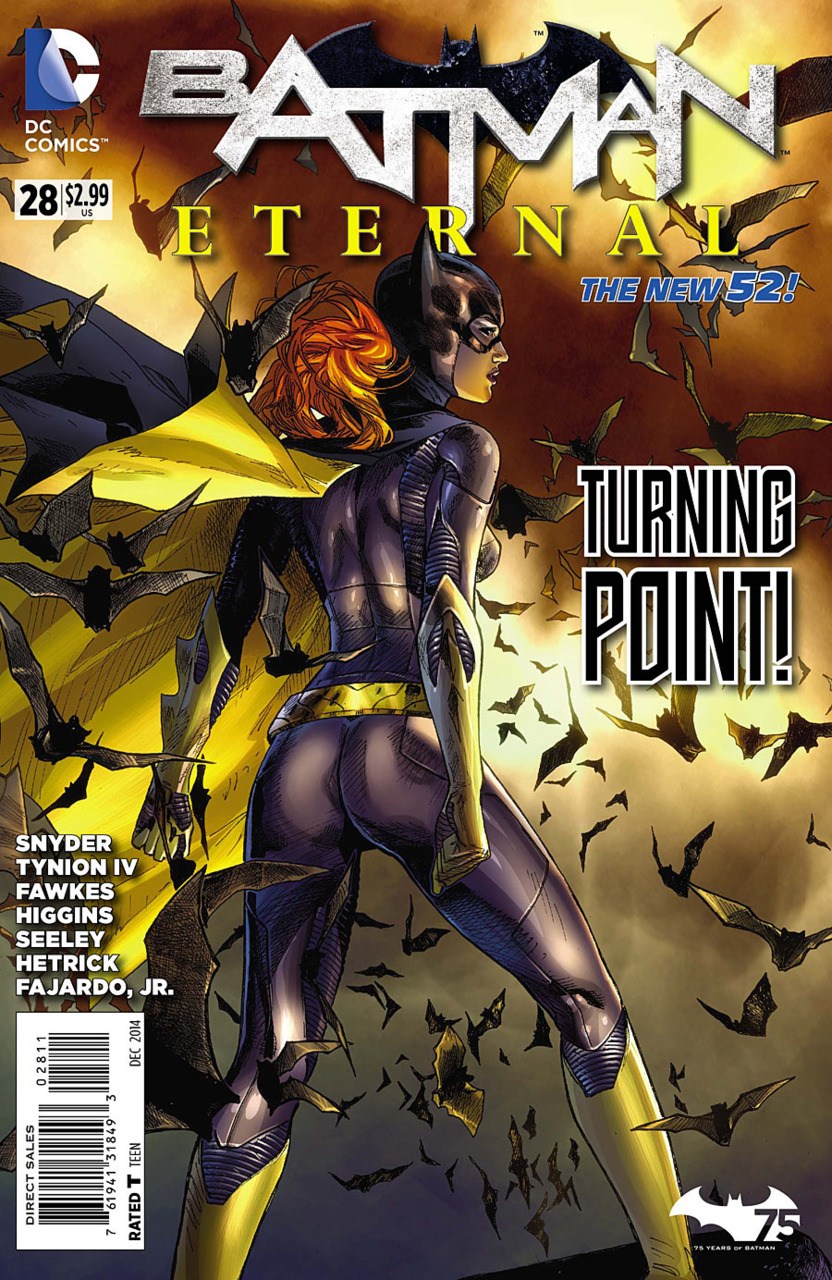 Of all the script writers for Eternal. I feel like Tim Seeley’s issues are the weakest. Now this issue wasn’t bad. It was actually enjoyable to read, but there were some problems. The dialog was fun and quippy, and it fit the characters who were talking in that way. Dialog seems to be something Seeley is natural at. However, his plot, and story progression is what needs some more work.

Meghan Hetrick does the art, and if that name seems familiar, she did the Joker’s Daughter issue. I really like her art, and I hope she gets more work. Hopefully a monthly. It’s very animated… The kind of style I gravitate to.

Right off the bat, Red Hood gets into a bar fight. He wins, of course, and is about to rejoin his band of Outlaws. But Starfire tells him to say goodbye to Batgirl. Babs, has gotten ahold of Bard, and is interrogating him because the scumbag has kept Gordon in prison. She has tied a rope around his ankle, and continually drops him from a rooftop and brings him back up. Jason finds her, and talks her out of dropping Bard. He says how that’s not who she is… That’s who he is, and he lets go of the rope. Barbara realizes what she’s done, and grabs the rope at the last second. She ties Bard, and Jason tells her that she’s still better than him. They hang out for awhile on a bridge, and Jason says how Gotham has never been enough for him. Barbara asks what if there were more, and Jason says no. Because he’ll never be Dick Grayson. Which kinda made me sad. I was starting to like this paring. I’m sure this’ll be brought back up again later.

Batman has captured Flamingo in order to follow him to the man who hired him. He does this, and it leads him to Bone’s club…

Earlier… Bone has tied Catwoman to a pole, and is going to execute her in front of Jade, Ibanescu, and many others in his club. Croc shows up to save Jade, and a brawl ensues. Jade is shot in the melee, and Croc goes on a rampage, killing the people responsible. Batman shows up, just in time to find everyone dead, Catwoman beat up, and Croc holding the dead body of Jade in his arms.

Catwoman goes to meet her father. She now accepts the role as CrimeLord.

The act of setting up Jade, heir to the McKillen crimefamily, only to have her be the catalyst for Selina’s role of CrimeLord feels off. Also, this scene doesn’t really match up with what we were told sent Catwoman in this direction. Batman didn’t abandon her, they just weren’t together for this period of time. Batman does show up, and he comforts her in this time.

I really did like the Jason – Babs budding relationship, and I hope to see a continuation of this. Jason will be back.

I also hope to see more of Flamingo. Even if he does get beat-up on. He’s just fun. Maybe he can team up with Tiger Shark. That’d be fun.