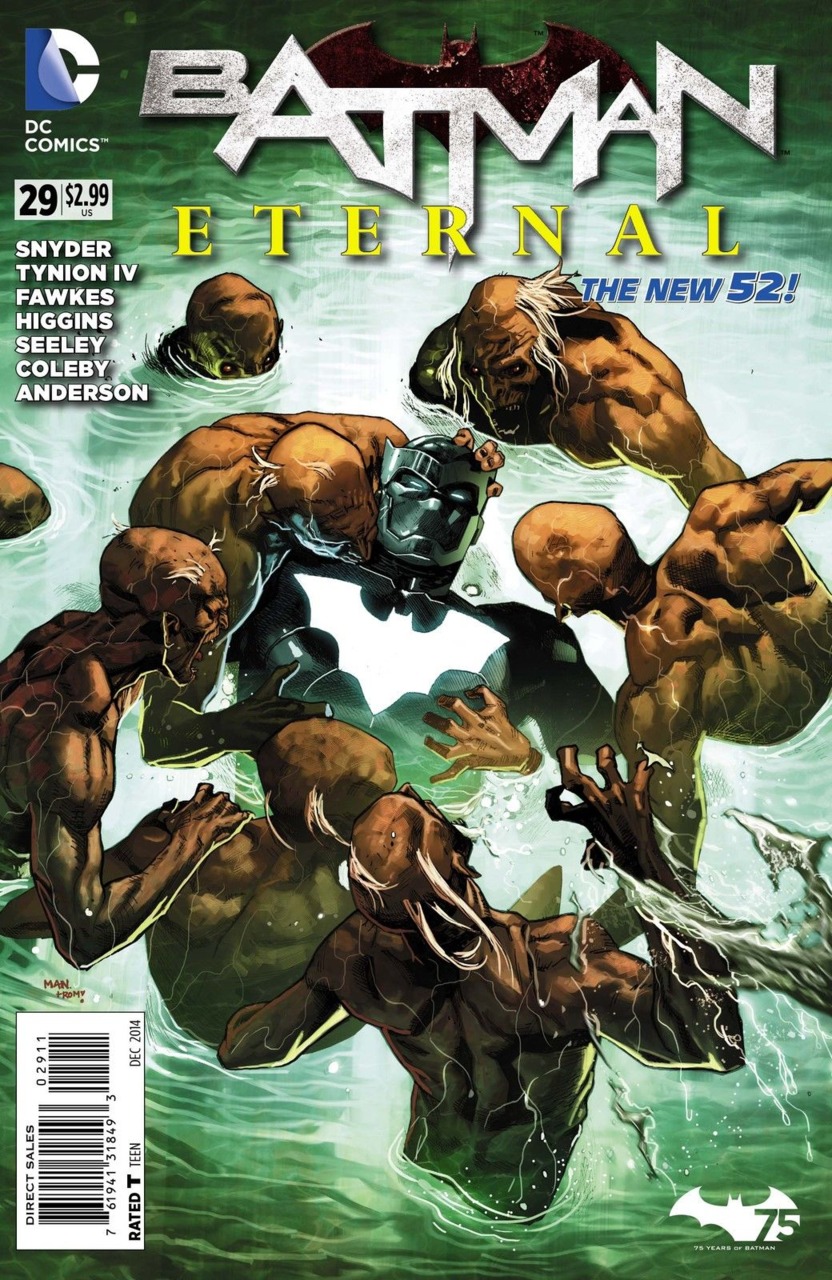 Ray Fawkes is back, and although he tells a good story, there are continuity problems from the previous week, as well as his own story this issue. You’ll see later in the recap, but it’s just mistakes like this that make you scratch your head and wonder what’s going on. One thing I found impressive, was that we only see Hush for one panel on one page. But his presence is felt throughout the book, and that’s a neat thing to incorporate into the issue.

Simon Coleby is on the art. I don’t know who this is, but he did a nice job. It was a mix of Michael Lark and Jae Lee. So if your into those guys, you’ll enjoy this. I really liked the way he drew Hush. Hopefully we will see more of that. Romulo Farjardo Jr.’s colors really made the work pop, though. So props to him.

We open with Alfred having a reaction to Scarecrow’s fear toxin. It looks as though Swamp Thing has appeared, and is jamming his hand into Alfred’s throat. Dr. Milo and Magpie watch through the window. They come across a woman who is barely alive, and Dr. Milo tells her that the Ten-Eyed Man killed her three weeks ago. Lying… But we don’t know why. And we see Bane in a cell behind them. Is his role coming up soon?

Joker’s Daughter is holding someone against their will, threatening to break their other leg if they try to escape. But, we never see who this is. I thought it was Alfred at first, but he’s at the Asylum. So I don’t know. She gets a note from Hush, telling her to listen to Blackfire and do what he says. She starts making her way down there, when one of the monsters tells her that Blackfire is calling for her. She responds by beating him with a crowbar.

Meanwhile, Hush is across the street. It looks like he pours a bottle of blood on the floor, however, it could be some other red liquid… And arms a bomb in this building. I was wondering if he had got Bruce’s blood somehow and was framing him, but I wouldn’t know how he would have gotten that.

Batman shows up to stop a riot against the GCPD, when two helicopters show up and threaten to light them up if they don’t clear the streets in thirty seconds. Batman throws a smoke bomb into one, so that they can’t see, and it goes off panel… I’m pretty sure that they crashed. I don’t see how that could’ve worked any other way. Batman knocks out the officers in the other, and take over the controls.

Batwing comes to in the water, and begins to fight off the monsters. His com-link is restored, and he radios Batman, and Julia. He sends her the Riddler’s code found on the wall about twenty-five issues ago, and she decodes it, reading: “arkham is just a price of the plan if you can read this you are smart enough to know our foe”. Deep stuff. That was worth decoding. I feel sorry for anyone who did a long time ago, because that gives us nothing.

Corrigan is being used by Blackfire to release the Spectre so that he can open up the portal to Hell. He succeeds, and Arkham Asylum explodes, and sinks into the ground.