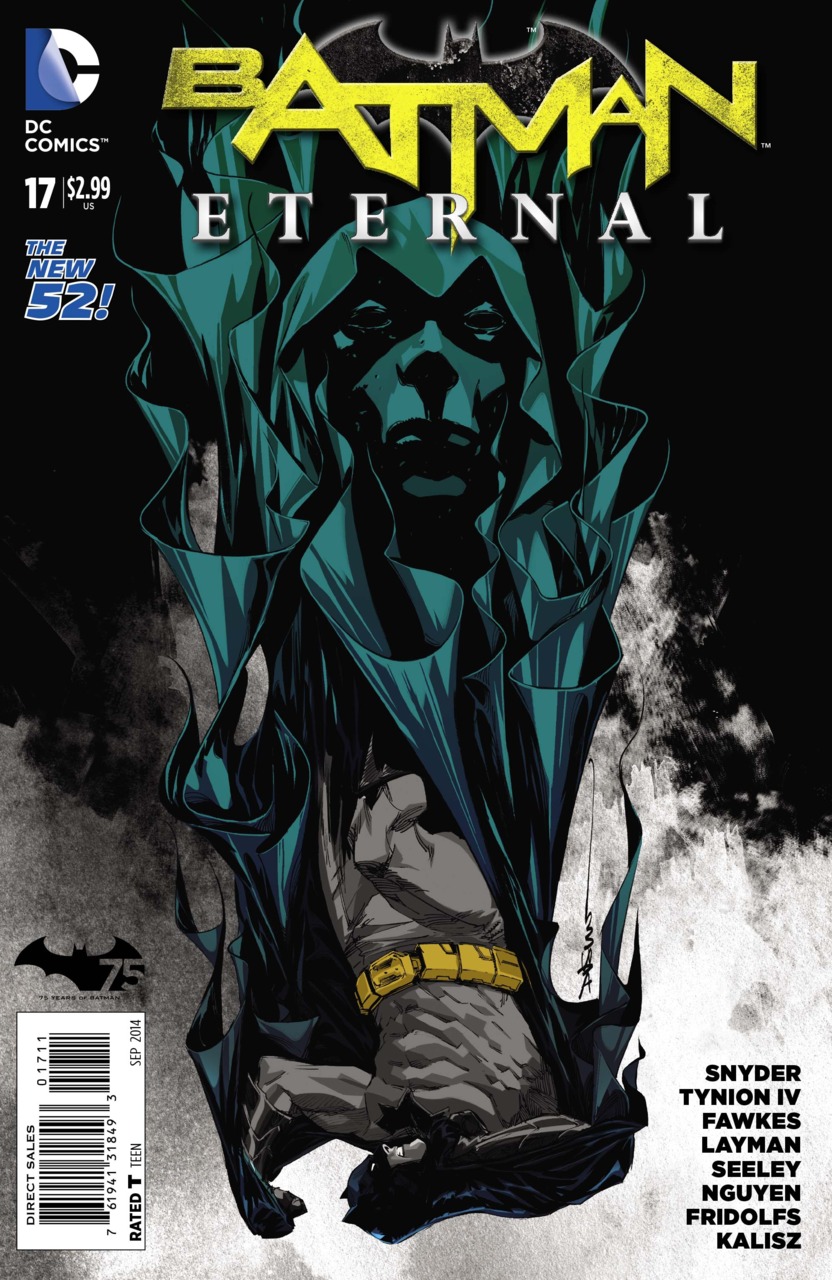 Lesson #1: Be careful who you choose to follow in your worship. They might be some crazy, evil person trying to kill you.

This is the last leg in the Ray Fawkes/Dustin Nguyen story before we get a little break for awhile. I must say, that I really enjoy how the team has told this mini-arc. We get a nice 3 issues of consistency, along with the same artist throughout. While I wish I could say the next few issues will be following the same format, that doesn’t look to be the case in the next few weeks. Hopefully, this will become the norm.

I thought it was nice that we get an introduction of who Deacon Blackfire is just as he really gets involved in the story. He seems to be a compelling villain. For me, the villains who use religion to further their cause are the most scary. Getting a cult devoted to you, no matter the cost can be a great way to mount the odds against our hero. Probably my favorite thing Fawkes does in this issue, is although he jumps back & forth in time & in events, he mirrors the dialog between the two scenes. So that it makes it easy to follow, but also gives it a poetic feel to the overall story.

Dustin Nguyen’s art gets down & gritty this issue. It’s hard to believe this is the guy who was doing Lil’ Gotham not to long ago. Everything is so creepy & Dustin nails the tone that Fawkes is going for. His cover is freaking sweet, showing off the Spectre in Batman’s cape… However, we fail to witness that event. But, how it ends, it seems it could be how we begin our next arc.

3 years ago… Deacon Blackfire has come to Park Row, the slum of Gotham, to be it’s savior. He is built up as their hero, & they follow his every word. After one of his sermons, it is revealed that he has been giving them free meals afterward, full of drugs to help his influence over their mind. He has certain ones kidnapped from the crowd of his choice, and has them “prepared”. He also has had a “special guest” locked in the basement for some time, keeping him drugged as well. This is revealed to be Batman. Blackfire has his congregation come down with him, and gives a speech to convince them to kill Batman. Batman breaks free, and tells Blackfire to do it himself. He refuses, & the crowd comes to. They beat him & we aren’t sure if they kill him or not.

Present… Joker’s Daughter emerges from a tunnel carrying the head of Luke Fox… Wait. That’s not what happened. That was a dream Luke’s friend Rory had, and he calls up Luke, but fails to reach him.

Tokyo… Tim & Harper are trying to talk to Sergei, but he’s not cooperating very well. Maxwell (the monkey with robotic limbs) is about to inject Harper with something, when she electrocutes him. This catches Sergei’s attention. He looks over the schematics for the nano-bots, but says they were stolen from his lab a year ago. Tim doesn’t believe him, & tells him he’s coming back to Gotham. Note: No monkeys were harmed in the making of this comic.

Wayne Manor… Julia is questioning why Alfred would leave the secret service to become a butler. Especially for Bruce Wayne. Alfred leads her to the grandfather clock… Is he about to open it? Revealing the cave to a woman without Bruce’s permission again?! It’s Batman ’89 all over again!!!

Underneath Arkham Asylum… Deacon Blackfire has been risen again through Maxie Zeus (AKA The Vessel), and is commanding these creepy undead monsters against Batwing & Corrigan. They seem to be holding their own, until they fall through a wall into a cavern of water. Blackfire then turns the monsters into Man-Bats, as Joker’s Daughter has a conversation with “daddy” (is Joker really there?). While Batwing is nowhere to be found, one of the undead grabs Corrigan, & pulls him under.

Fawkes and Nguyen close out their horror tale in Gotham.