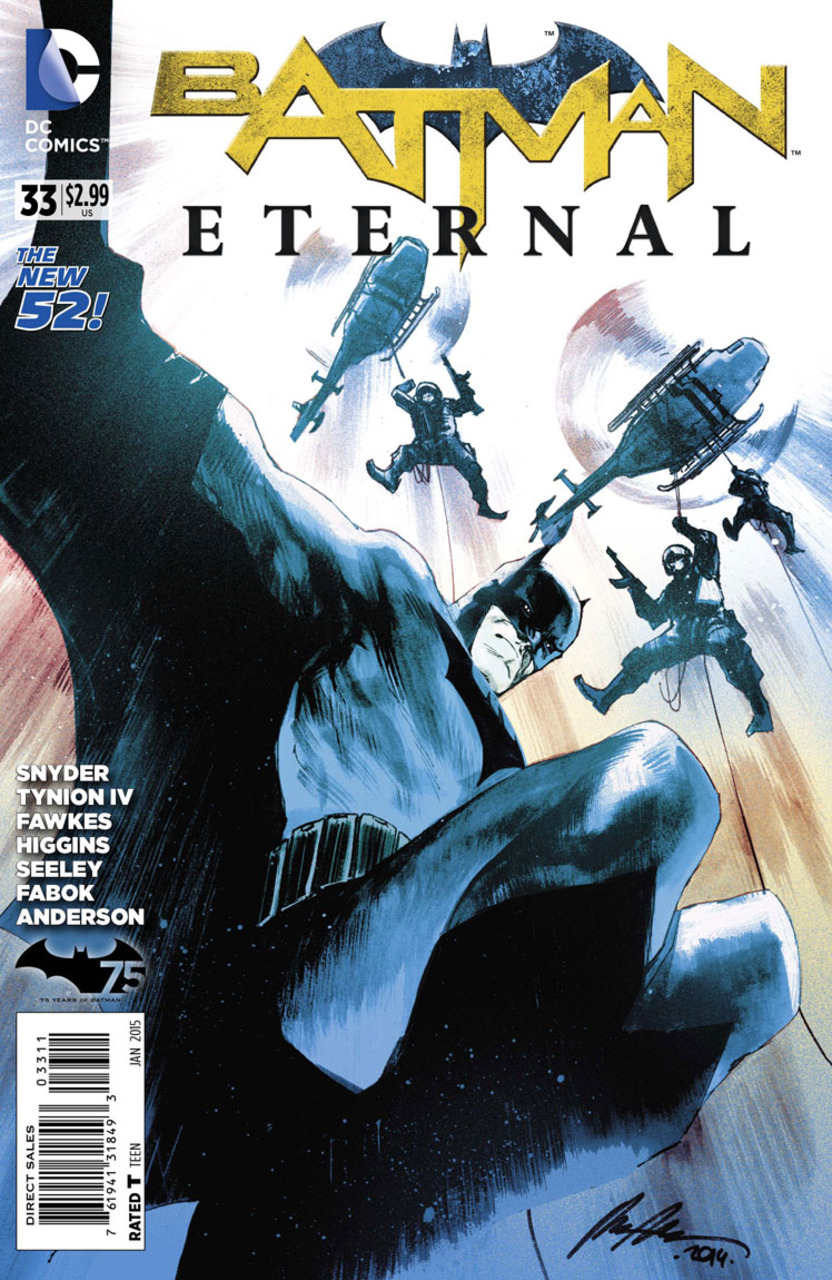 This issue continues the awesomeness of Kyle Higgins and Jason Fabok. These two guys seem to be in sync with each other, and they are just killing it. Unfortunately, this is Fabok’s last issue of Eternal as he has moved on to Justice League which is also in stores this week. Kinda makes me wish these guys were on a monthly title together… Higgins really plays with some of the different senarios brought into the fold, and cranks up the intensity that makes this book an exciting read. Fabok’s art is great to look at, and his storytelling is just as good.

We see the clean up after the huge explosion last week, and Bard making a statement to the press. He doesn’t want to point fingers (that’d blow his cover), but he mentions that this may have been a retaliation strike by Batman.

Julia believes Batman should make a statement, but his focus is reclaiming and dismantling the caches throughout the city. Julia, being a field officer, wants to get involved and help.

Elsewhere, Bard is sinking some whiskey on a rooftop during a meeting with Hush. He’s ticked off because he didn’t know Hush was going to kill his men, but Hush doesn’t really care. He breaks the bottle and threatens Bard to stay in his place. He also tells him to slow Batman down, as he knows he’ll be looking for the caches.

Batman and Julia find one of seventeen, and get to work. He shows her how to disarm them, when a GCPD helicopter shows up. Batman has Julia hide, while an armed guard jumps out, and crashes Batman through a window. The guard tells Batman to surrender, and Batman believes this guy is new. The guard tries to spray him with a foam, and gets his cape. It quickly hardens, but Batman escapes and takes him down. He gets to the roof, only to find two other guards passed out on the floor, and Julia standing near them.

Word has gotten out, though. Vicki Vale’s report has spread, and this puts Lucius as well as the rest of Wayne Enterprises in some hot water. Lucius gives his concerns to Bruce, but he can’t talk long, because he’s busy disarming the caches. Alfred takes back his information duties for the time being. He’s worried about his daughter being out there in danger, but Bruce assures him that she is better prepared than any of the Robin’s were. But, as she is prepping another cache, Hush sneaks up behind her!

Another great installment from Higgins and Fabok. Thumbs up coming from this guy.