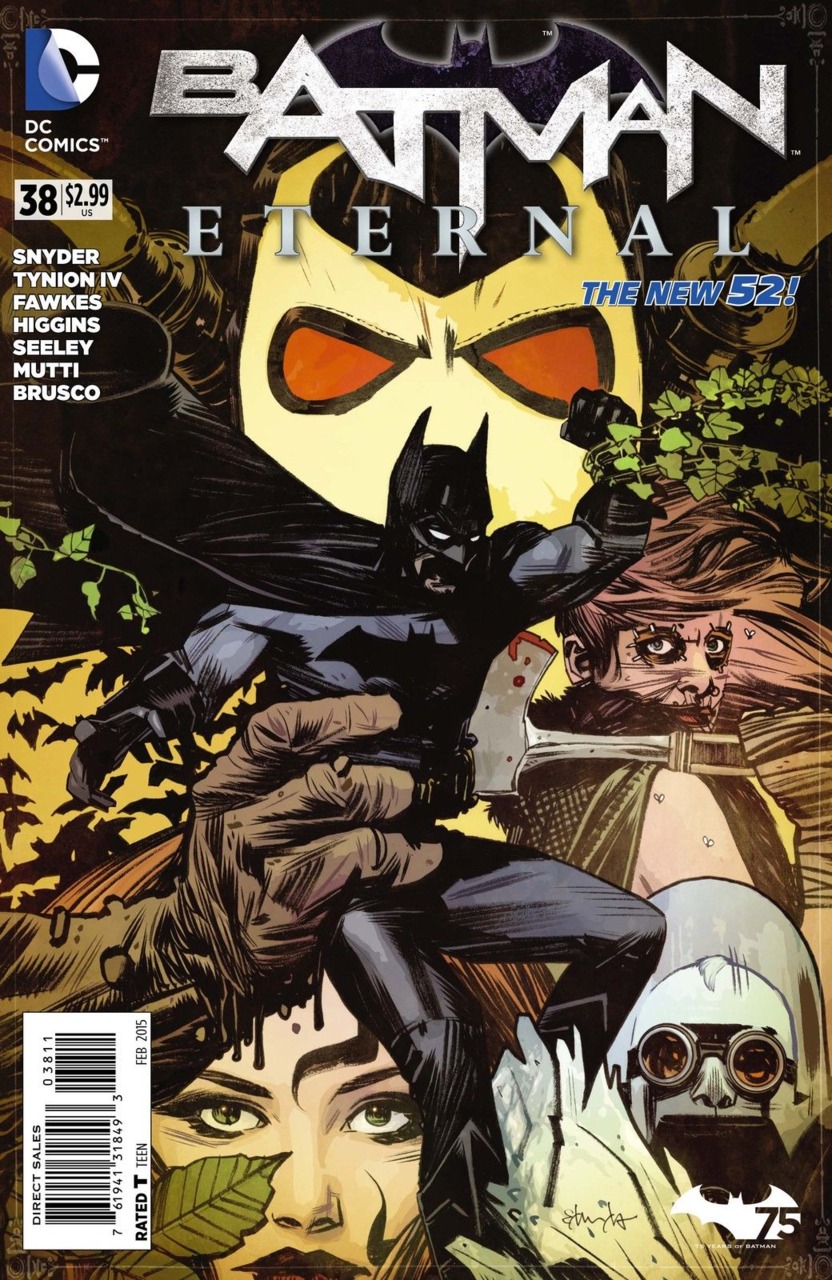 This week in Eternal, we find Batman arriving at the Willowwood Home for Children. Julia reminds us about the destruction of Batman’s caches and about the limited supplies that Batman has to take down the cadre of villains hidden inside the building.

Meanwhile inside, Scarecrow and Clayface discuss their situation and about the different Arkham patients that are holed up with them – Mr. Freeze, Joker’s Daughter, Bane and Poison Ivy.

After being absent for several issues, we finally return to Blackgate Prison where James Gordon is still incarcerated along with Rex Calabrese. It seems that Rex has been given some generous leeway with the guards after rescuing them during the riot, Rex even offers to pull some strings and get Gordon out of jail…but he responds that he still believes in the system and in Gotham.

Back at Willowwood, Batman has taken down Joker’s Daughter with a chloroform patch installed in his cape and he proceeds to go after Mr. Freeze. Below ground, Ivy and Bane discuss sticking together as Ivy tries to influence Bane with her pheromones…however they are interrupted when Killer Croc comes bursting out of one of the nearby sewer pipes. Croc and Bane begin to fight to settle a score that was initiated back in “Arkham War.” We cut back to Batman who has subdued Mr. Freeze, and communicates with Penny Two about using the batglider to drop down and rescue the hostages being held by Scarecrow and Clayface…they do this as Batman battles the two villains and Julia pulls the hostage to safety.

Down in the sewers, Bane appears to be getting the upper hand on Croc until Croc starts to cut off Bane’s Venom supply and then begin slashing at his arteries. Killer Croc comments that cutting off Bane’s Venom isn’t enough, as the Venom is still in his blood stream…but by draining his blood, Bane would become extremely weak.

After the battle is over, Batman goes down into the sewers to find the remaining villains…only to discover Bane’s body strung up and nearly dead. We then discover the Poison Ivy escaped in the confusion and was actually working for the Kingpin Selina Kyle in order to take down the “freaks” of Arkham. Selina then meets with the various families and informs them it is time for them to take their rightful place in Gotham.

The issue closes with Gordon meeting with Jason Bard who admits to the mistakes that he made and wants Gordon to help him, while in return Gordon tells Bard to get him out of jail. Finally we see that Killer Croc was also working for Selina as he bids his “queen” goodnight as she heads off to sleep.

Overall I feel that this was a decent issue of Eternal…I can feel that they are definitely ramping up to the closing act and this is simply closing down a lot of the ongoing stories. We see that Selina is starting to take control of the Gotham crime families and she is manipulating both Poison Ivy and Killer Croc to eliminate the threat of the Arkham inmates that were loose following Arkham’s destruction.

A couple thing to point out however…I don’t really like that Batman was taking down villains in the famous “off panel land”, I felt that the villains were only there for decoration and it didn’t really matter what happened to them. Lastly I’m not sure how I feel about Jason Bard doing a sudden turn going from guy completely set on killing Batman to “I made a mistake, please help me fix it.” Seems a little too quick for my liking.