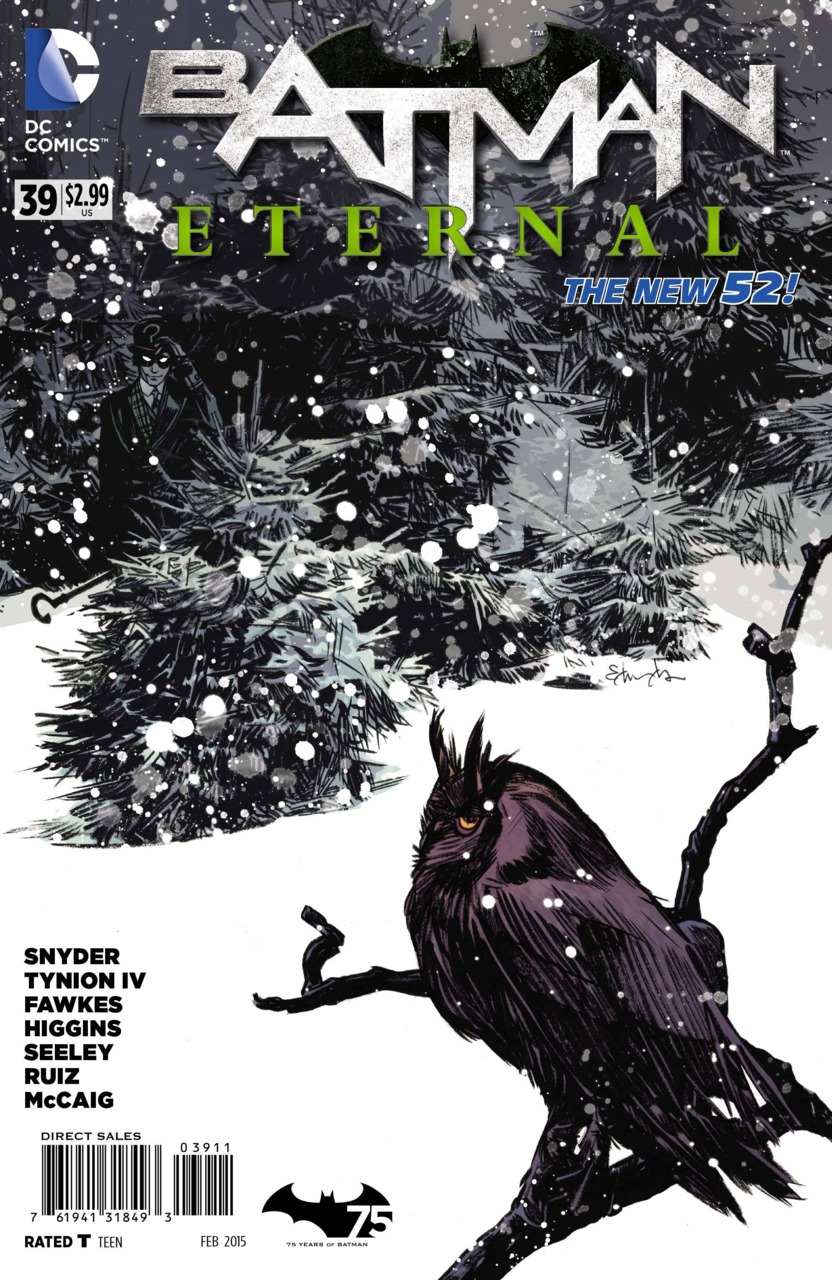 This week, our issue opens with Batman and Julia Pennyworth in the Batcave discussing the loss of all of Batman’s equipment. Batman then communicates with Red Robin who has deciphered the riddle left behind by Riddler regarding his location. Bruce then leaves the Batcave as he has discovered where Nygma is hiding.

We then cut to Gotham City, where we see the armored truck holding the various Arkham inmates captured in the previous issue. The truck is suddenly assaulted by several armed SWAT members.

Meanwhile at Gotham Gazette, Vicki Vale and her collegue Warren are discussing the events of what has been happening throughout “Eternal” and how Vicki hasn’t been doing her job as a reporter. Warren nonchalantly dismisses his intern Patrick for the night, and the two reporters start to connect the dots regarding the events. Everything from Arkham’s destruction to Commissioner Bard.

We then cut to Miller Mountain, where we see the Batwing descend upon Bullseye Casino Resort. Batman enters the abandoned building, and he discovers an invitation that invites him to partake in the devastation of Gotham City…the note also reads that James Gordon will fall in precisely two weeks time. A voice is heard throughout the building as Riddler admonishes Batman who seems to be losing his touch. The two discuss how Riddler isn’t a part of what is going on, but he seems to know who is behind it all. As always, he delivers another riddle as to his true location. Batman departs and begins to climb the mountain, following several boxes with question marks on them.

Back in Gotham, Bane gives the order to attack the SWAT officers and the villains quickly dispatch them. Another armored car opens to reveal Cluemaster and his gang of villains, and a limo pulls up to reveal Selina Kyle.

Back on the mountain, Batman arrives at Riddler’s hideout and begins to attack Riddler…demanding he reveal who has been behind the events of the last several months. Riddler plays with Batman’s mind, but the Dark Knight isn’t interested in the usual games.

The issue closes as the three storylines intercut between one another – an unknown voice talks to the various villains and presents them with Batman’s arsenal to do what they will; Batman attacks Riddler who demands he return to Gotham with him and help him uncover the identity of the unknown mastermind, however Riddler refuses and sets of the question mark boxes which all explode; finally we see Vicki and Warren still hard at work when Patrick the intern returns…with a gun. He promptly shoots Warren, and tells Vicki that she wasn’t supposed to be here…the issue finishes with another gunshot ringing out from Patrick’s gun.

I think the only thing I can safely say about this issue is…confusing. Overall, “Batman Eternal” has been a very well done story with intricate plotlines and a host of villains. However, I was truly confused as to what is unfolding at the moment. Riddler seems to know who is behind everything…but continues to play his games with Batman, he references that whoever the mastermind is, he is weakening Batman physically and psychologically.

Then we are introduced (sort of) to our mastermind who has assembled all of the villains as well as Selina Kyle. He hands over Batman’s confiscated armory and gives them free will to do whatever they want. It’s interesting that Selina is involved in this plot somehow, as in the previous issue it seemed that she wanted to eliminate the costumed villains.

Finally we see that Patrick the intern is set to kill his boss Warren and Vicki Vale. My only question revolved around Warren and his fate as we saw him in last week’s Batman Annual which takes place during the “Endgame” storyline…which takes place after “Eternal.”

So overall I am confused, it was still a decent issue but everything seems to be getting convoluted as we get closer and closer to the end. Who is this mysterious mastermind? And what does he have planned for Gotham City? Clearly it isn’t good if he has let a bunch of bad guys have access to all of Batman’s toys. Guess we will have to wait until next week.