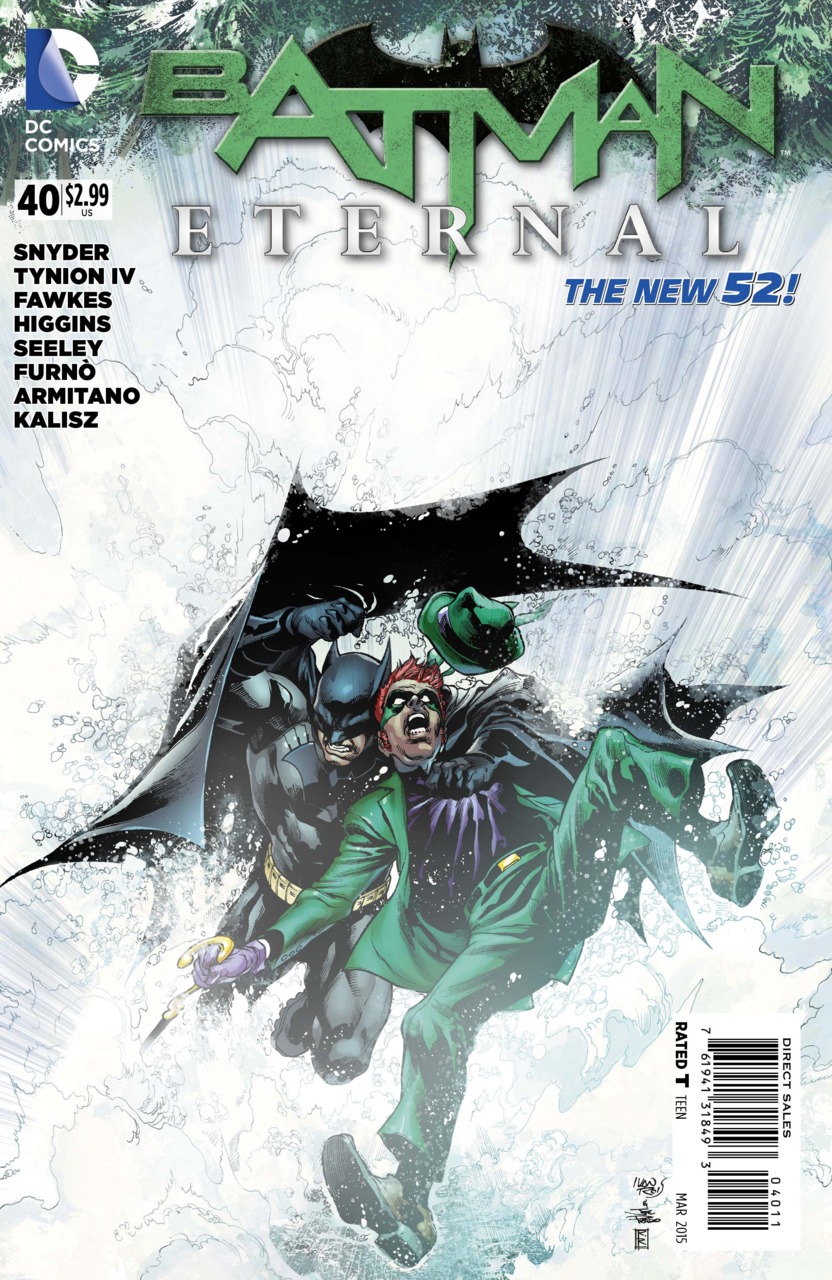 As the snow settles on the avalanche caused by Riddler’s exploding boxes, Batman begins to dig his way out of the snow as this week’s “Batman Eternal” opens. We then cut back to the warehouse full of villains, as the unknown voice gives them free reign over Gotham City with all of Batman’s former equipment. The villains begin to faun over various pieces – the explosives, incendiaries, motorcycles etc. Selina begins to leave stating that this isn’t “her style,” and Clayface retorts that she prefers other physical activities with Batman…rather than fighting him. Selina counters that she owns Gotham now and if they were to join her they could possibly take over the entire eastern seaboard. As Selina enters her limo to leave, Firefly torches the car and it explodes.

We then cut back to the mountain as Batman finally unearths himself and then the Riddler. Batman begins dragging Nygma back to the buried Batwing, and states that they will be returning to Gotham. Riddler begs not to return and Batman asks what he is afraid of…Riddler responds that he isn’t afraid, he is being perfectly logical.

Meanwhile at Gotham Gazette, Vicki Vale has seemingly avoided getting shot by Patrick the intern. Vicki manages to spray Patrick with pepper spray, who in turn drops his gun…Vicki manages to grab the gun and knocks Patrick out, she then calls for an ambulance for Warren who is still alive.

Back at the mountain, Riddler tries to escape by Batman corners him again. The two banter about why Riddler won’t help Batman, and Nygma persists that he only brought Batman to him to get him to think for himself.

We cut to the villains, who begin to assemble their weapons and move out on the city…but not before Signalman and Mr. Freeze discuss Catwoman’s apparent demise…Signalman responds that there isn’t a body in the wreckage and “in this town you learn not to assume anything.” Freeze states that Signalman is smarter then he looks and shouldn’t be hanging around with C-List villains like Cluemaster, Firefly, Ratcatcher and Lock-Up. As they leave, we see that Selina has indeed survived and manages to escape. She meets up with Killer Croc and informs him of what transpired. They both look up to see the Batwing soaring over the city, and Selina decides that Batman can handle the hoard of villains. As Selina drives off, she begins to piece together the connections of the “Eternal” events and calls one of her underlings and learns of the bounty on Stephanie Brown’s head…she then speeds off in search of her.

As our issue draws to a close, we see that the ambulance has arrived and takes Warren and Vicki off to the hospital as we begin to see several explosions rock the city…and then we cut to a drain pipe where we see Jim Corrigan haul the body of Maxie Zeus out of the water. It seems that Corrigan has been navigating the sewers ever since Arkham’s destruction, carrying the unconscious Zeus with him. Corrigan then begins to heal Maxie as to ensure that Deacon Blackfire can’t repossess him. The issue ends with Corrigan dragging Maxie off to the police, as we see an image of some creepy looking children with glowing white eyes.

So my confusion from last week is starting to be relieved with this week’s story…unfortunately this will always be the downside of comics, we only get one piece of the puzzle at a time when all we want is the whole picture right away.

I really liked the dialogue between the villains in this issue, they really hit home about the hierarchy of the various bad guys and that some are better than others…and some look down on even more. The fact that Mr. Freeze even calls out Signalman with hanging out with Cluemaster and his gang showcases how our awesome A-List villains think about the dregs at the bottom of the barrel.

I was hoping for a bit more between Batman and Riddler…I want to know more about what has Riddler so terrified. Even though he keeps repeating that he is only being logical about his reaction, who can frighten Riddler enough to force him to flee Gotham and remain on a mountain to get away from what is coming??? As far as I am aware, most of the major players are already in the story…which begs the question of who is behind this story? Could Ra’s Al Ghul be pulling the strings? Maybe the Court of Owls is making a return to punish Bruce for nearly destroying their society? Could Two-Face be coming out of the shadows to manipulate out Rogues Gallery? Who knows? But I am definitely waiting to see who it will be.

I also enjoyed that we are slowly linking up with our “Batman Eternal” preview that was seen all the way back in “Batman” #28 that we saw last year. Selina is making the connections (as everyone seems to be) that the “Eternal” events are all linked together somehow…and we see that she is off in search of Stephanie Brown, which will lead to her capture as we saw.

Overall this was definitely a step up from last week and I am looking forward to our big bad finally being revealed in the coming weeks.