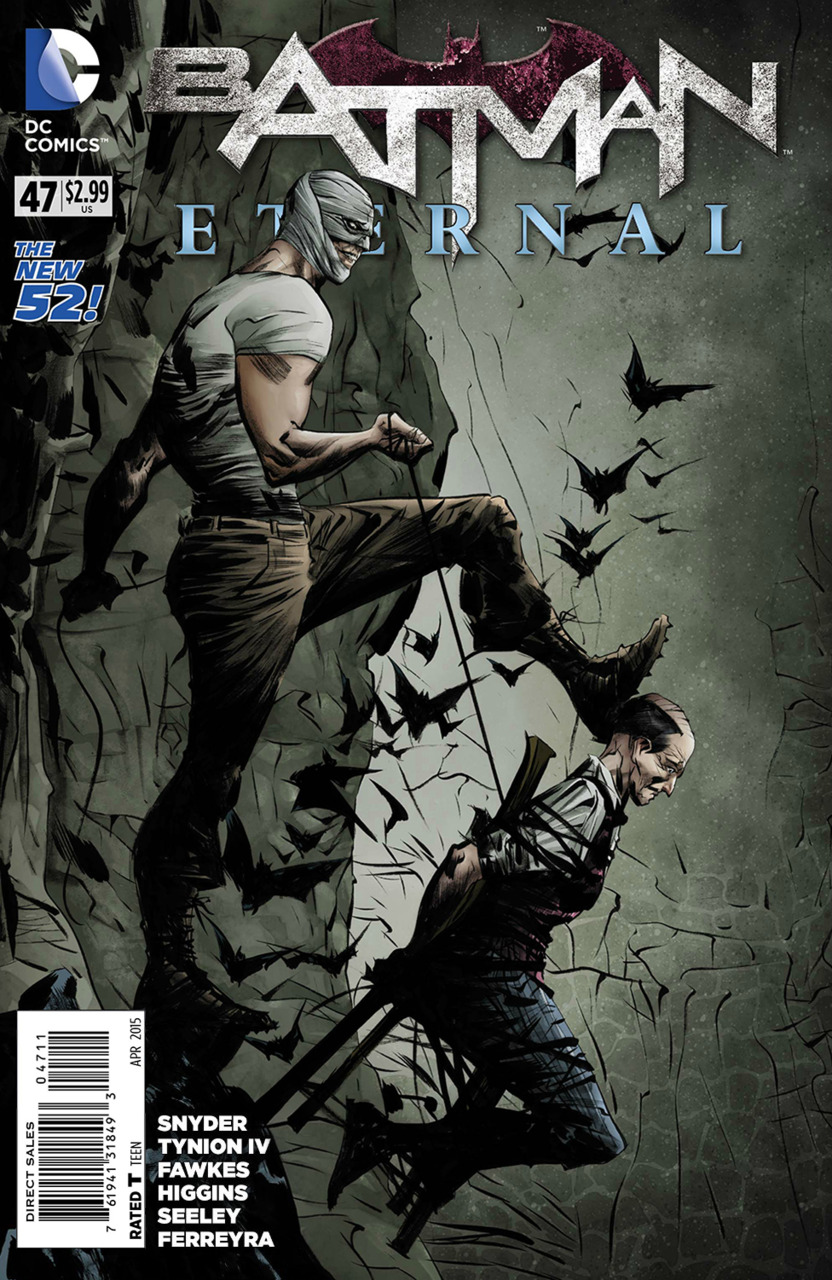 “Batman Eternal” continues this week as we see Hush watching a sleeping Alfred in the Batcave. As Alfred suddenly awakes screaming his daughter’s name, Hush informs the butler that Julia is out in the city. We then cut to Julia who responds to a lit batsignal which was activated by Selina Kyle. As she slips a mask over her face to conceal her identity, Julia approaches Selina who asks why she activated the signal. The two briefly come to blows after some verbal sparring, and Selina eventually reveals the shipping manifests that she discovered in the previous issue. She tells Julia that every villain in Gotham has received any “toy” that they’ve ever wanted.

We cut to Batman who is returning from his foray with the League of Assassins in last issue, he discusses with Alfred how Ra’s was not the culprit behind the events of “Eternal.” As Julia returns to the Batcave, she informs Batman about how his rogues’ gallery has gained incredible resources in his absence. Batman instructs Julia to contact all the family members and have them round up the different villains.

We then get several pages of various Bat Family members taking down some of the villains: Batwing manages to take down Scarecrow who was retrofitting automated drones with fear toxin dispensers; Red Robin engages Clayface as he is busy filming various scenes involving Batman and the Joker…in which he plays the role of Batman; Bluebird tracks Mr. Freeze to an abandoned neighbourhood where he has created an incredibly creepy family of ice sculptures; at a familiar carnival where her father was tortured, Batgirl arrives in order to capture Joker’s Daughter who has chosen to take up residence at the abandoned amusement park that Joker brought Gordon to following Barbara’s injury. As these events unfold, Julia instructs each team in order to help in the villain’s capture…but as she is speaking with Red Hood (who tracks Bane to a bar that showcases exotic cage fights) the power in the Batcave suddenly goes out. We then hear her getting knocked out as well as Alfred getting attacked…Hush can be seen smiling in his cage.

As Alfred awakes, he finds that Hush has been freed and jettisons Julia from the cave in some sort of escape device that empties out into the Gotham River. As she emerges, she sees a burning Gotham in the background. The issue closes with Hush pulling a bag down on Alfred’s head as a mysterious figure can be seen just off panel. As Hush punches an override into the batcomputer, the batwing can be seen losing control and crashing somewhere in Gotham.

I have to say, that even though not much happened in this issue…I actually really enjoyed it! I liked that each family member got to take on a different villain…it had some nice action sequences, and I found it pretty hilarious that Clayface chose, not to steal or commit crimes, but film scenes where he gets to play as Batman.

As always we got teases of our big bad and even saw his/her/its arm…hopefully (as I always write) this gets revealed soon…I don’t know how many more “it’s this guy! Nope it’s not him” that I can take.

Before it gets too late, I wanted to weigh in on who I believe to be our big bad for this series. Now the popular theory (which I agree with) is that Lincoln March aka Thomas Wayne Jr. is the guy behind all of the events. It makes sense with his close resemblance to Bruce Wayne, as well as knowing the identity of Batman and being deceptively capable of creating this massive plan. However I would like to offer up an alternative.

After listening to one of the latest podcasts on the website, I got to thinking about who else could be responsible…just in case March isn’t the culprit. My only other though landed on Owlman! Last seen at the conclusion of “Forever Evil,” Owlman mysteriously disappeared and was not captured alongside Ultraman and Superwoman. Also known as Thomas Wayne Jr, Owlman originates from Earth 3 which is known for being a world where the heroes are villains and vice versa. Like Lincoln March, Owlman bears a strong resemblance to Bruce Wayne and could easily be mistaken for him (thus explaining why Stephanie Brown believes Wayne to be a bad guy), he can also reference the owl that has been seen in the Thanksgiving promotional art for “Batman Eternal,” plus he has worked with groups of villains before and is capable of organizing a massive event that results in Batman’s destruction. Although it will probably not happen, I thought it would be quite a curve ball if Earth 3 Owlman turned out to be the bad guy…and if this turns out as fact, well let’s just say I called it right here.

Overall this was a good issue that continues to hurtle us along the path that will eventually lead to a big reveal.