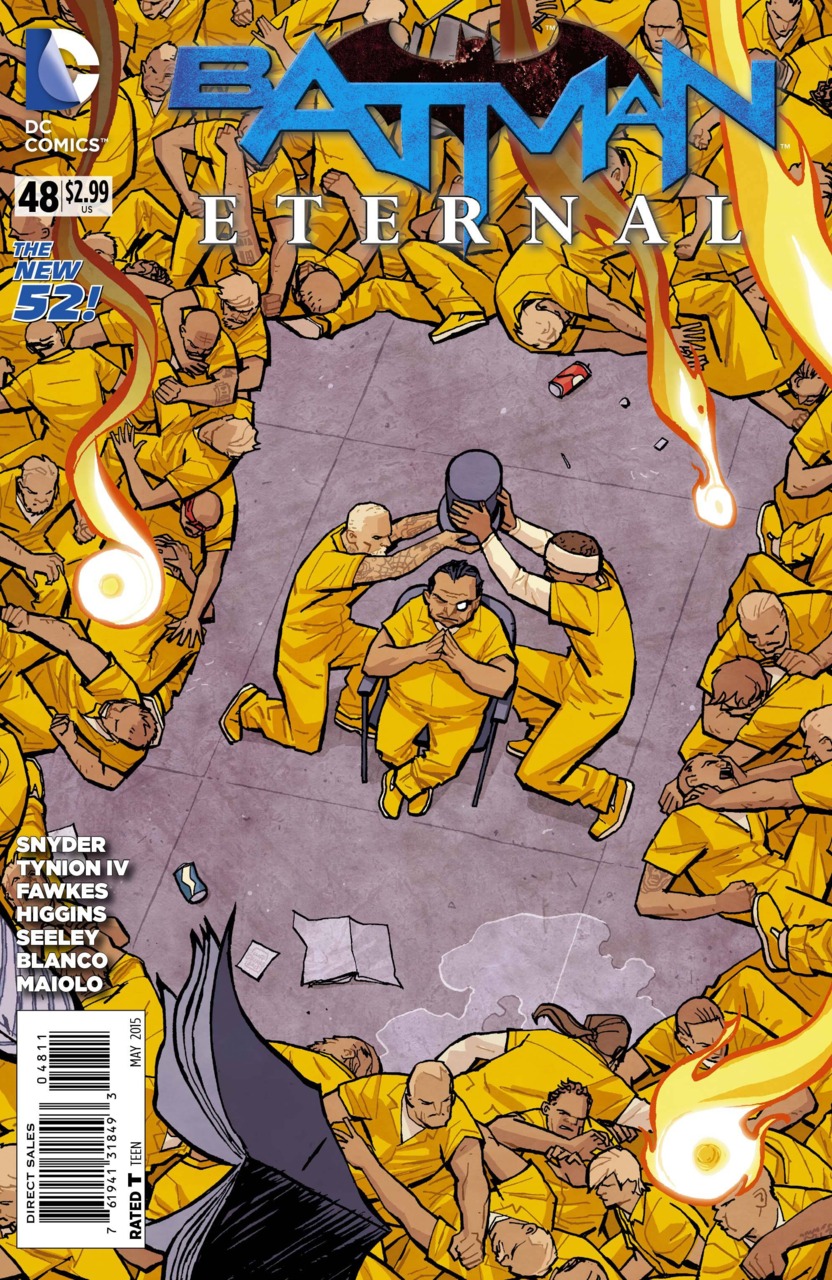 This week’s “Eternal” opens with a meeting between Commissioner Jason Bard and Mayor Hady. The discuss James Gordon and Bard argues that he has evidence to prove his innocence and that Gotham City needs Gordon…now more than ever.

Cutting over to Blackgate Penitentiary, Penguin gets a mysterious phone call that offers to restore all of Penguin’s power and fortune that he lost to Falcone. The scenes intercut with one another as Hady and Bard discuss James Gordon…and how Hady doesn’t believe in releasing him, even though he is innocent – Gotham doesn’t see him as such. In Blackgate, the mysterious caller continues to entice the Penguin who seems to finally give in and is instructed to help out with “someone.”

We then see a guard outside his cell give a nod to the Penguin and then ventures off to a guard room, knocks out the man inside and opens the cell doors throughout the prison. As another riot begins to breakout, we cut to the various members of the Bat Family as they continue to fight off the villains from the previous issue: Red Robin vs. Clayface; Batgirl vs. Joker’s Daughter; Batwing vs. Scarecrow; Bluebird vs. Mr. Freeze; Red Hood vs. Bane. As the team communicates with each other, we can see Hush monitoring the various feeds in the Batcave…Alfred is seen imprisoned in Hush’s former cell and the family continues to discuss how the villains are using Wayne technology to augment themselves. As Hush takes to the keyboard, he begins to disrupt the various heroes and each of them is suddenly caught off guard when their technology begins to fail or backfire on them.

We then cut to Julia Pennyworth emerging on the shores of Gotham River. She overhears the various heroes calling for help as they are blindsided, and Julia notes that Hush has control of the batcomputer and is taking everyone down. As she wonders aloud why no one else has built another batcomputer she comes to a realization and runs off into the city.

Meanwhile at the crashed batwing, Batman emerges from the wreckage and is visibly injured and bleeding. Climbing the fence of a nearby airforce base, Batman commandeers a fighter jet and takes off towards his city leaving a giant “IOU” sprayed on the tarmac of the airfield.

Cutting over to the Gotham Gazette, Vicki Vale is busy getting information on a location that she is heading out to when Spoiler appears in her window. The young hero wonders why Vale hasn’t published her information she discovered about Jason Bard, and Vicki reveals that she believes Bard can’t be behind everything…what she could publish would effectively destroy him. As Spoiler points out that the “Loser Squad” is also involved, Cluemaster appears in a helicopter outside the building and launches a grappling line that pulls Spoiler from the building. As she is yanked out, she drops a USB key that Vicki notices.

As Batman flies over the city he picks up various calls regarding the endangered Bat Family as well as the riot at Blackgate. As Bard rushes back to GCPD, Bullock also informs him of the riot and Bard becomes extremely worried about Gordon. The issue closes out back in Blackgate where Gordon saves another inmate…but he is quickly accosted by Penguin flanked by three giant henchmen.

Well, we can definitely feel the intensity picking up with this issue of “Batman Eternal.” Pretty sure I managed to read through this issue at least twice in only a few minutes…even though it was a quick read it was a good one. Overall I have felt that lately each issue has been turning into a “Whodunnit Villain of the Week,” but it feels like we are finally getting back to the core of the story – ultimately Hush and mystery ally’s plan to destroy Gotham City.

I like that we get to see a technically savvy Hush using the batcomputer against our heroes…it’s not often that we see the good guys outsmarted with their own technology, but it is definitely something I feel that Batman would have planned for…too bad none of them were able to overcome what happened – however I feel that this could be getting saved until next week.

I also enjoyed that we touched on all of the major story points in this issue – we got to see an update from the Jason Bard story as he tries to get Gordon released…and this was honestly something I had forgotten about since we have seen Bard in several weeks; we also got updates with Vicki Vale and Spoiler and saw the latter get kidnapped by her father; the fights with the various Bat-family members versus their respective villains also got touched upon…and I am really excited to see the conclusions to these; and lastly Batman (as always) manages to survive and steals a jet to get back to Gotham. Overall this fast paced action and storytelling kept me hooked the entire time…however I am curious as to what Julia Pennyworth suddenly thought of, maybe Lucius Fox has a way to battle back against the captured batcomputer?

Overall this was definite upturn from the previous issues and I am anxiously awaiting the conclusion to this story…side note, I still am holding out that Earth 3 Owlman is our big bad!