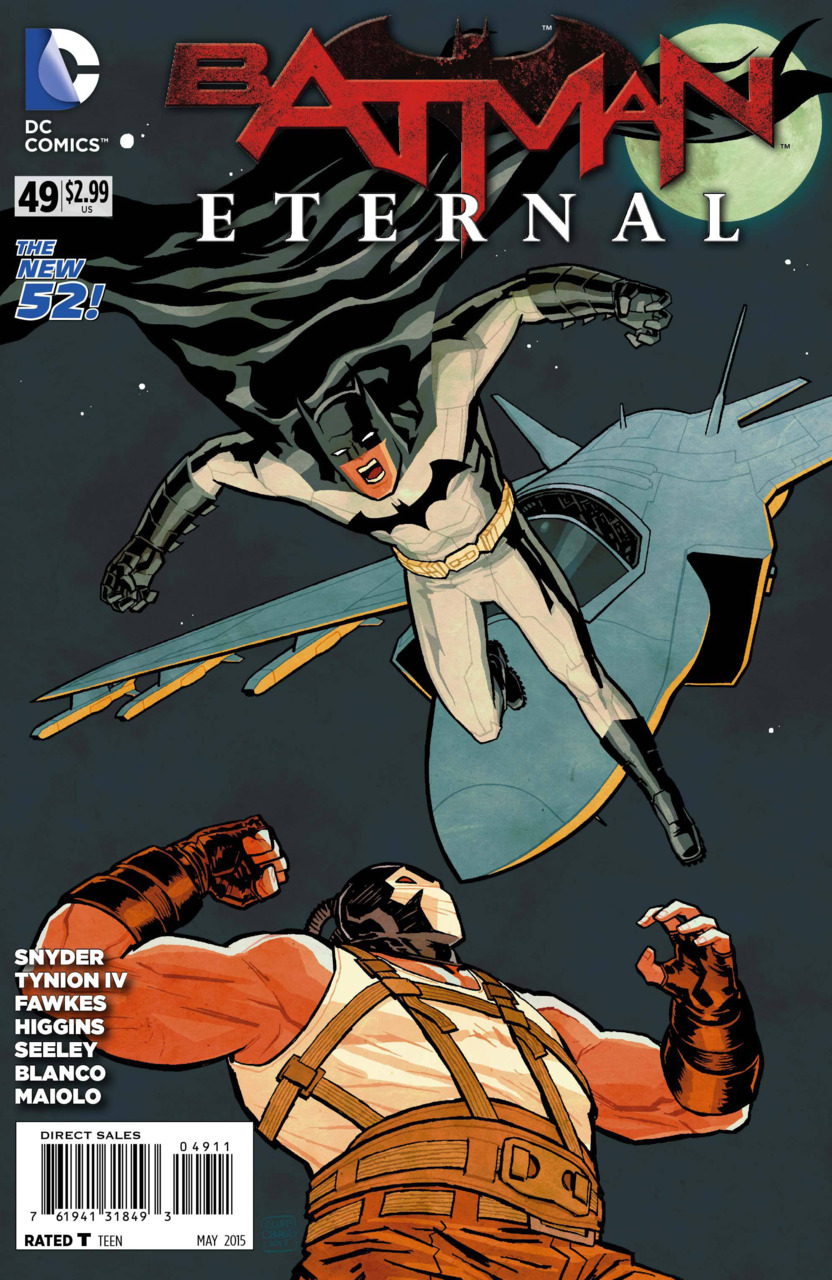 This week’s “Eternal” opens with Bullock, Jason Bard and Maggie Sawyer racing in a squad car towards Blackgate Penitentiary as Bullock comments that his contacts haven’t seen or heard from James Gordon since the riot started. As we cut to Blackgate, Gordon is being detained by some large thugs being directed by the Penguin. As Gordon taunts the large thugs, they begin to beat on him…but suddenly Gordon grabs Penguin and locks both himself and the villain inside a nearby cell. As Gordon begins to beat the former crime boss, Penguin wails for his henchmen to save him…but Jim comments that if they did enter, then they would have to face him. As the thugs abandon their leader, Gordon ties up Penguin and states that they have a lot to discuss.

Cut across to several locations around Gotham City, the various members of the Bat Family continue to battle against their adversaries seen in the previous issues. When we last left them, Hush had gained control of the batcomputer and had successfully sabotaged the hero’s battles. The Family members continue to call for help as Hush sits smugly in front of the computer and watches them. Trapped in Hush’s former cell, Alfred starts to converse with his captor…but he quickly shuts the faithful butler up as he remotely directs a batboat set to explode in the path of a cargo ship.
We then cut to Julia Pennyworth who has infiltrated the Robin’s Nest and thanks Tim Drake for being extremely paranoid and creating a duplicate of the batcomputer in his hideout.

Meanwhile, Stephanie Brown is brought aboard the helicopter that her father is piloting and he begins to congratulate her on being able to figure out the plot. Stephanie responds that “it’s right in front of their noses. When it’s been there right from the very beginning. For somebody called Cluemaster, you’ve made it so obvious.” As her father offers for them to become partners, Stephanie fights for control of the helicopter and manages to jump onto a nearby rooftop…as she pulls her mask back on, the helicopter banks away.

Out in Gotham harbor, the batboat continues on its collision course with the freighter. As Hush watches from a monitor, Julia suddenly tries to regain control of the boat and the rest of the systems. As the two battle it out in cyberspace for control, Alfred speaks a code that releases him from his cell. Coming up behind Tommy, Alfred knocks the villain out and continuously strikes him. Leaping to the computer, Alfred succeeds in altering the boat’s course before disaster. With Julia and her father back in control, the two Pennys re-establish communications with the Family and begin to turn the tides.

Not much to discuss in this issue, although the dialogue was very well written and the art was quite lovely…I feel that “Batman Eternal” has started to drag their heels a bit. As has been previously noted (in both these reviews and episodes of the comic podcast) this book has started to take a slight downturn…although (in my opinion) has had a few good issues here and there. That being said, it’s almost like they are starting to tease us…Hush even comments that he can see the finish line as he is taunting Alfred. It also feels that the writers don’t have anything else to do but throw random bad guys at the heroes to give them something to do for the next few issues. For instance, I actually thought it was clever for Hush to break out of the cell and takeover the batcave…who knew that it would be resolved in two issues. I thought it would have been interesting if Hush had broken out several weeks ago and forced the Bat Family to stop relying on their gadgets and technology. Suffice it to say, they are back to exactly where they were three weeks ago…except Batman is now fighting a mech warrior Bane.

The only other interesting thing to note is the short scene between Arthur Brown (Cluemaster) and his daughter Stephanie. Brown openly congratulates Steph on figuring the plot out…but correct me if I am wrong, doesn’t she think Bruce Wayne is the big bad??? How can that be right??? Has something happened that has changed Steph’s perspective? Stephanie even remarks that “it’s been there right from the very beginning.” Should we be looking at early issues of “Batman Eternal” in order to identify the big bad? Or is this the writer’s way to have us looking at the Thanksgiving teaser image more closely? Could this be a subtle reference to the owl in the tree?! (Okay…I’m reaching on that one). But still, this is an odd conversation that the writers are choosing to show us…the only question is “why?”

Overall this was an okay issue, I found Julia’s solution a little too convenient…but then again, we only have three issues remaining so I guess it needed to have a quick resolution.