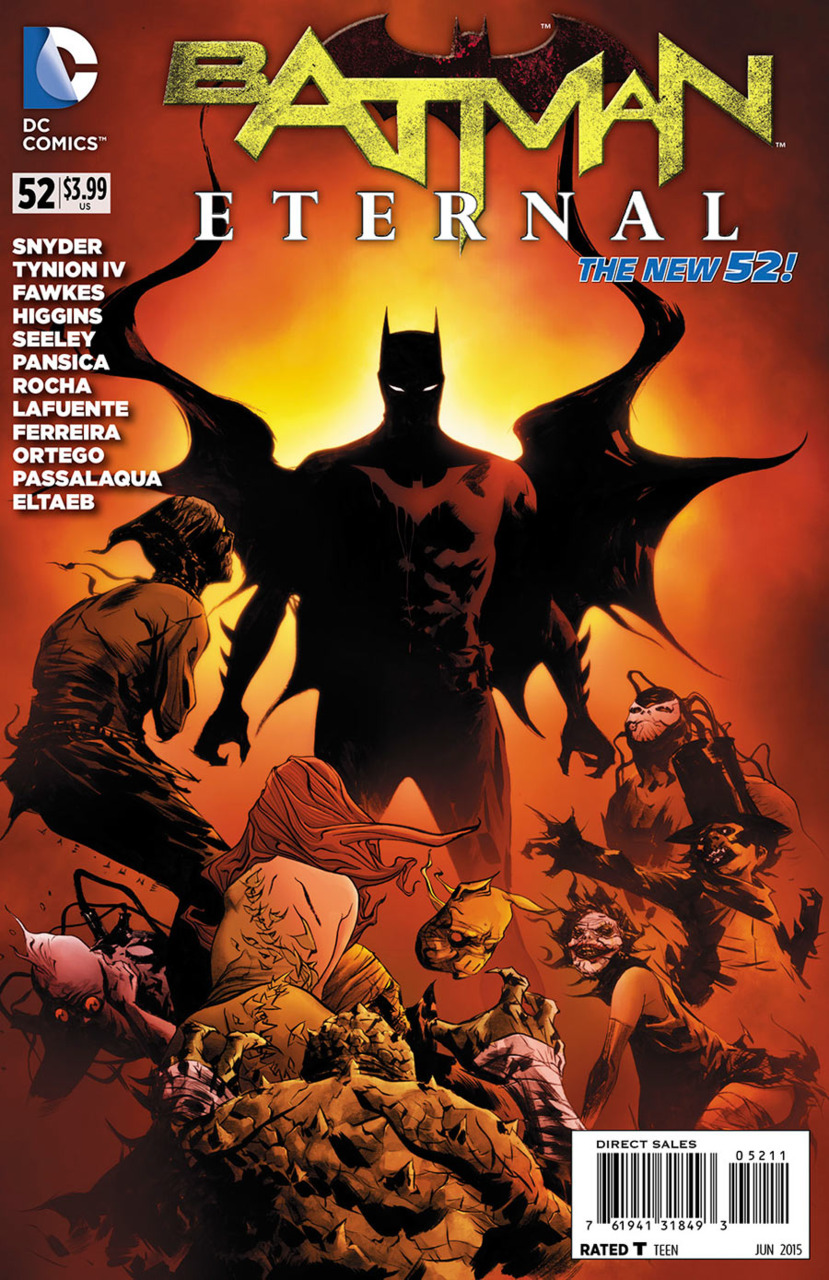 As the final issue of “Batman Eternal” opens, we are treated to a flashback where Cluemaster is seen talking to his daughter Stephanie on the phone. As she mentions that the city is under attack by the Talons (which places our events on the Night of the Owls), Steph comments that she knows that Batman will save them. As Cluemaster quickly dismisses this and ends the call, he enters Harbor House and begins shouting to seemingly no one, that he had successfully following the clues left behind which led him to this place – the hiding place of the Court of Owls. As Cluemaster enters the meeting room, he finds the entire Court dead (which Batman would later discover at the end of the Night of Owls) and begins to lament that he needed their resources to complete his plan…however a voice is heard and Lincoln March steps forward and asks to hear what Cluemaster has to say.

Cutting back to the present, Lincoln quickly laments the death of Cluemaster and remarks that he was smarter than Batman (or anyone else) ever gave him credit for, “he had this excellent plan, relying on the fact that he was literally the last person [Batman would] ever expect to put it together. On the fact that he was a nobody.” The conversation is cut short as Batman and Lincoln engage in battle, with March flying Bruce through the shattered remains of the Tower and out into the open air. As Bruce pulls some shattered glass from his back, he quickly attacks Lincoln and forces him to the ground.

Across the city, we continue to see the Bat Family rescuing people from the encroaching fires…we even see that Red Hood has become trapped beneath falling debris and Batgirl rushes off to save him. At the Egyptian, Selina talks to Killer Croc about not knowing what to do about the burning city…meanwhile; Bullock and Gordon continue to setup a plan to help Gotham’s citizens.

As we return to the Bruce-Lincoln battle, the two crawl from the wreckage as Bruce ties some cloth around his face to protect his identity…he then grabs up some debris and attacks. They continue to fight, with Bruce getting pummelled by March’s superior strength and suit. He comments that the people of Gotham will find a broken man after he is finished with him. He also states that Batman will be finished in Gotham, forgotten by its people. As is if on cue, several Batman logos ignite throughout the city…across its advertisement screens and through dozens of batsignals lit across the sky. As this happens, James Gordon can be heard speaking through the city’s public address system telling the people to defend themselves and their city…just as Batman would. Tonight, they are all Batman.

Still attempting to flee, Spoiler looks up to see the batsignals painting the sky and stops her flight. As she is about to get hit by a car, a stranger leaps and pushes her out the way…slightly bewildered at his actions, the man comments that he is doing what Gordon said…the city needs everyone tonight. We then cut to Red Hood who is about to get crushed by debris as Batgirl suddenly arrives to save him…however they are both nearly taken out if not for the timely arrive of Talon (Calvin Rose). Across the city we see the call has gone out, and many heroes have arrived to help – Batwoman, Black Canary and even Katana. Selina and Killer Croc can even be seen rescuing people from collapsing buildings.

As the fight between March and Bruce becomes even more deadly, Lincoln is suddenly attacked by Spoiler who has arrived to help the fallen hero. As Lincoln looks up, we get treated to an amazing panel of the entire Bat Family standing with the fallen Dark Knight. As James Gordon raises his gun on the villain, March quickly tosses smoke grenades and disappears into a nearby sewer opening. As Red Robin mobilizes the heroes to purse, Batman attempts to follow but is stopped by Gordon.

One week later we see Jason Bard visiting Vicki Vale as she talks to him about his actions throughout the events of “Eternal” and how she is already preparing to publish her story. Bard comments that he wants the story told and invites her for drinks so he can add some more details.

Over at the Egyptian, Batman arrives and is greeted by Croc and Selina. Bruce notes that it was good for them to have helped during the crisis…except that the people they helped are missing items from their homes. At the Arkham disaster site, Batwing meets up with Jim Corrigan and the two discuss their adventure in the bowels of the former Asylum…Corrigan even comments that Luke did an excellent job and invites him to join a squad being put together by the GCPD, specifically tasked with battling the supernatural – they will be known as the Midnight Shift.

At the home of Jim Gordon, Barbara can be seen doting on her father as she tells him how she had gone to a dark place while he was in prison…and it was only due to a friend that managed to pull her back over to the light. We then see said friend, Jason Todd, sitting in bar attempting to leave a voicemail for Barbara explaining his feelings…however he eventually gives up, erases the messages and calls Roy Harper for a pickup.

In the Narrows, Red Robin arrives at Harper Row’s apartment and asks how her new roommate is. Harper comments that Stephanie is slowly winning the approval of her brother and notes that she nearly died when Steph tried to setup an apartment chore wheel. Tim then acknowledges the good job that Harper did during the cataclysm and gives her a quick hug…only to be interrupted by Stephanie. Harper quickly introduces Tim and Steph, and we are treated to some lovely awkward moments between the two. As Steph asks whether her father’s killer has been caught, we cut to an unknown location where we find that Lincoln March has been captured by the Court of Owls. The Court then imprisons Lincoln (like they do their Talons) due to attempting to destroy their home.

The issue ends with Batman and Gordon talking on a rooftop, as they comment this is the life that they both chose, Jim notes that this couldn’t be the only reason Batman wanted to meet him. Gordon then states that Scarecrow has unleashed a new toxin in downtown Gotham…as Batman swings off into the night, Jim Gordon stands ready alongside his ally.

I have to say that I was very pleased with how this series ended, and was glad that all the storylines were completed.

Although I was a little skeptical (and harsh) regarding the Cluemaster reveal, I found that both he and Lincoln explained the situation to an extent where I was onboard with the fact that this particular villain was able to concoct a plan to take down the Dark Knight…now, I would still prefer a Joker or Ra’s Al Ghul scenario, but I will give props to Cluemaster for devising this evil plot.

With the reveal of Lincoln March in last issue, I was still a little hesitant as to whether they would reveal yet another villain who was controlling March…I am glad to say that this was not the case. Even though March managed to escape the Bat Family, he was ultimately taken out of the picture by the group that he betrayed…the Court of Owls manages to cryogenically freeze him, just as they do their Talons. That way, he is out of the picture and effectively trapped…but can still be revived when needed.

I really enjoyed that Batman wasn’t the sole purpose of victory in this issue…I loved that Jim Gordon managed to rally the city by igniting batsignals all across the sky. And the Bat Family coming to Batman’s rescue was an excellent touch…I would love to have that image blown up and put on my wall. It has everyone in the picture! Well…all except Dick Grayson.

Although this series had a few ups and downs, I have to say that they succeeded overall. However, I definitely think they could have shortened the story down…fifty-two issues seemed to be far too long as they latter quarter of the story felt prolonged. The big question is how this series will hold up in the long run compared to stories like “Knightfall,” “No Man’s Land,” “Hush,” and “Court of Owls.” I am also interested to see how this series reads as a whole…something I am going to be doing in the very near future. Although the week to week format keeps the reader engaged to an extent, we can sometimes miss some overarching themes…and I even wonder if there are clues pointing towards Cluemaster early on in the series.

Overall, this last issue tied together the loose ends of the entire series. We got to see conclusions for all of the characters used throughout and got a decent conclusion with our villain getting incarcerated. As whole I would probably give the entire run of “Batman Eternal” a three out of five batarangs, but that could change once I re-read the entire story.