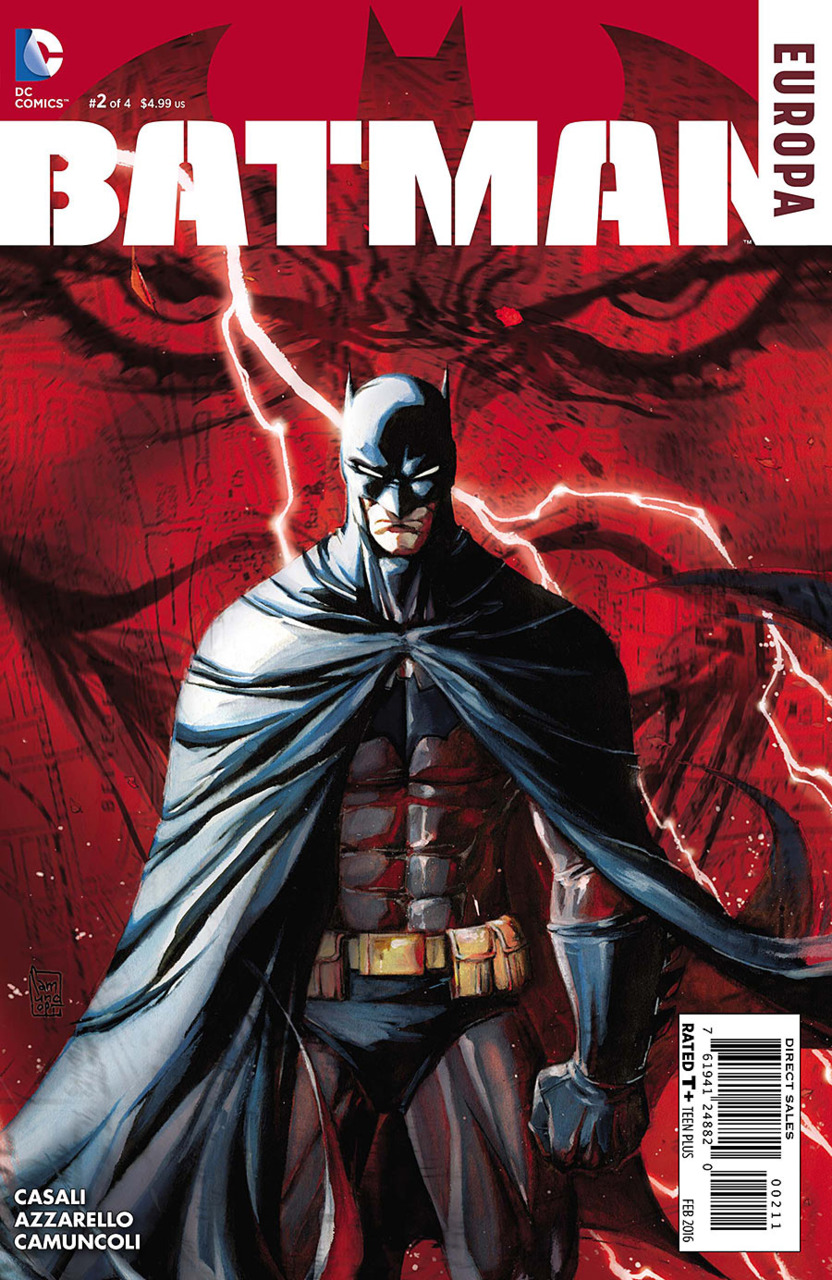 Batman: Europa #2 takes us auf Deutschland to Bohemia with Joker in tow. This comic starts in Prague with Batman and Joker looking for a cure to the virus that is killing rather quickly. Almost from the TV screens of Batman: Arkham City we see Batman and Joker declining as they tear there way through a poor Soviet Bloc nation still trying to recover from Communism. Despite the unoriginal nature of the story, it’s a lot of fun. I’m truly enjoying this story and the sheer craziness from the Joker. Bruce is a little more tolerable of the Joker’s antics as one of the best scenes from the story is Joker grabbing handfuls of cockroaches and other insects and trolling Batman. Another strength of this comic is the art and story telling. Like I said before I don’t know crap about art, but the panels have large, colorful landscapes that bring life a new take on Jim Lee’s Batman.

Batman and Joker’s main adversary in Bohemia (aka Prague) is the Golem Master. He controls a large army of wooden golem droids that beckon his call. It reminds me of the creepy jam band of animals from Celebration station, truly terrifying. They quickly slow down Batman and Jokers progress on finding the source of the virus. They try to hold off the golems as their hacker friend can work on a new location of the virus. Joker offers some fun scenes of taking out the golems in his own twisted hilarious way. The battle with wooden golems offers great fight sequences where Batman just obliterates them, which makes for eye candy.

Despite Batman and Joker’s handicaps from the virus they tear their way through the golems, but cannot prevent the kidnapping of Nina their hacker friend. In a not so surprising move we do find out the Golem Master is not the mastermind of the operation behind the virus. I do hope we learn the Golem Master was ripped from the computer screen of World of Warcraft level 10 Dungeon. After gather some extra clue Batman and Joker travel to Paris, France to eat croissants and sip espresso before finding more clues to the Master of Puppets (queue James Hetfield).

I wonder if the Master of Puppets is someone we know from the Batman continuity or is a new character?

The art truly does this comic well and is makes the departure of Jim Lee A-Okay. Giuseppe Camuncoli brings his won style of art to this iteration of Batman: Europa. Camuncoli brings alive the old dark streets of Prague and reminds me of the medieval feel the city gives foreign guests. As we know Europe is very different from the United States that the silhouettes of the city help the reader transport to old Europe.

I’m truly grateful for being able to review this comic and have been enjoying the story. Yeah the story is a little vague and I’m kind of lost on what’s going, but we know that Batman and Joker are going to laugh and punch their way to a cure or who knows maybe they die and come back nudge, nudge, wink, wink. Matteo Casali and Brian Azzarello continue with solid story telling and do have me hooked. I’m not good enough to know whose writing style is more present. I’m going with the Italian. I’m a very big fan of 100 Bullets by Azzarello and can tell there is another voice steering the ship of this story.

Lastly, I’m curious to find out what the last destination Batman and Joker visit at the end of the next iteration. Until next month, enjoy your winter holidays.