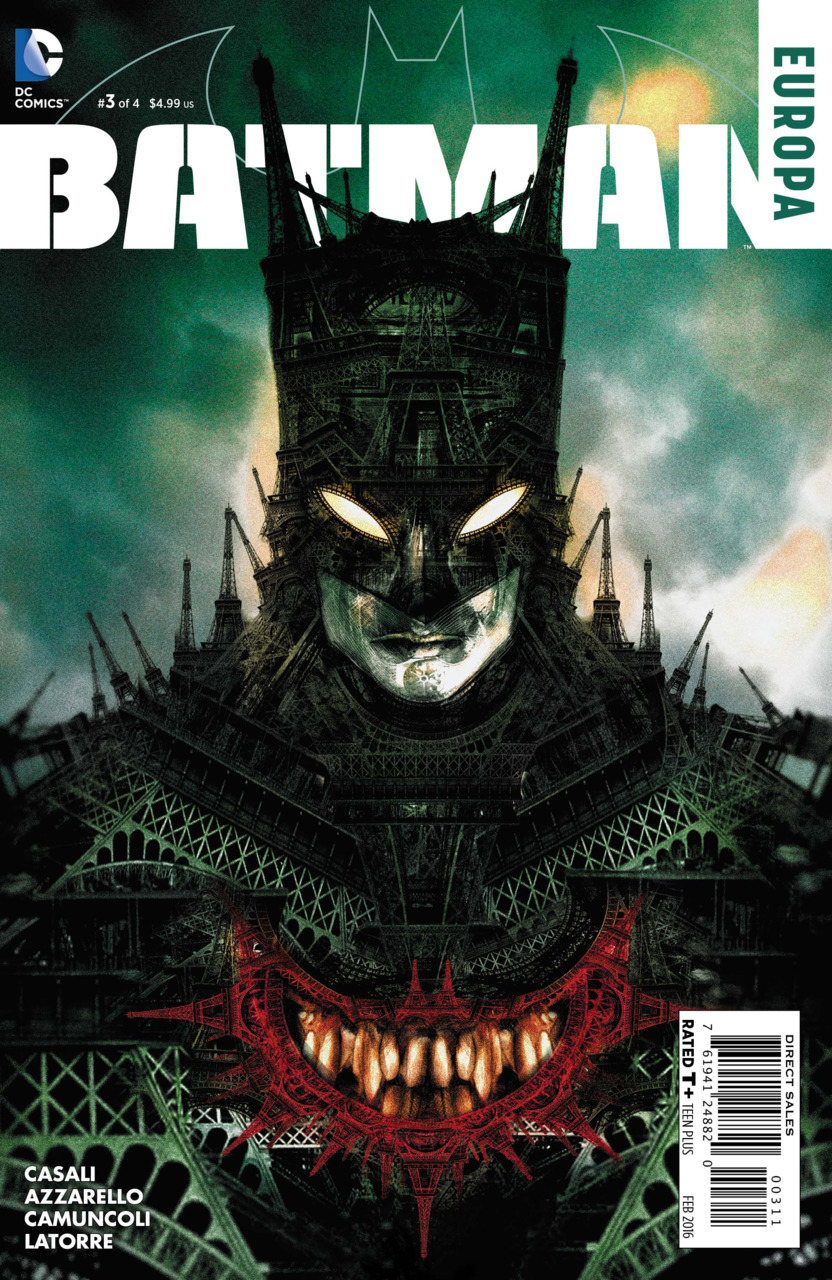 Batman and Joker venture on to Paris for crepes and Cote du Rhone, but quickly remember they’re dying in Batman: Europa #3. Brian Azzarello and Matteo Casali continue the story, as we are three-fourths complete. Diego Latorre does his best HR Giger tribute as he brings an impressionist take on Batman. Latorre’s brings a dark, gritty and frightening view to The Dark Knight.

Batman: Europa #3 finally offers us the villain behind the virus and the body count continues to rise across Europe. Batman and Joker find themselves in Paris and Azzarello and Casali have a fun and brief narration on the history of Paris and for whatever reason made me think of the amazing TV show Highlander. After showing off the Eiffel Tower, the Louvre and a passive aggressive French version of the Statue of Liberty, we find out our protagonists are in the catacombs of Paris.

Batman and the Joker are weakened by the virus making Bruce the not so World’s Greatest Detective as he is bewildered of a Joker cult in the French underground. Joker often serves as the narrator of this installment of Europa. Joker seems more “normal” and “reasonable” as he is eager to find a cure.

They continue to scour the underground to find their lovely hacker friend Nina.They find her being held by the man behind the virus. He is a nameless entity who utters words to inform Batman and Joker of their demise. Only referred as Monster, he reveals he is surprised that Batman and the Joker are alive. Monster looks like a cross between Jigsaw and a devil clown. I really enjoy how LaTorre designed Monster. The main villain gave me chills and I’m not easily frightened.

Batman and the Joker verbally spare with Monster, as they want Nina back. Her body is bent over a pile of rubbish in a very suggestive pose with a gargoyle like machine holding her down. I think this is a clue as we fought golem machines in the last issue. Joker proves to have the best insight that Monster is more than just a scary entity, but one that might be the downfall of Batman and Joker. Monster replies it takes a warped mind to know he has high intellect, but is also crazy. Even the Joker seems afraid of Monster.

The gargoyle machines attack Batman and Joker as they fight their way towards Nina. The gargoyles prove to be a match for Batman as he continues to lose his faculties and physical ability to fend of the machines. Batman falls toward the ground and the Joker saves his life. Batman reflects on how a physical scar will remind him of the day where the Joker saved his life. They find Nina died in a similar fashion as Portia, who is Brutus’s wife, a man whose name is synonymous with betrayal. She died being fed burning coals. Monster showed Nina a true Roman death. This proves to be the segway where Batman and Joker realize they have the travel to the Eternal City, Rome.

Batman: Europa #3 has been the most enjoyable of the stories so far. It’s shaping up for a final epic battle with Monster. As of now we don’t know if he is a new character or an established villain from The Batman Universe. I do fear that many people will be turned off by Latorre’s art. It’s not “traditional” comic book art many are used too. His abstract impressionist art fits perfectly into the dark undertones of this story, much like Giger’s art brought Aliens alive. I have no clue what comes next, but Rome and all it’s infernal glory will prove be the proper backdrop for the conclusion.