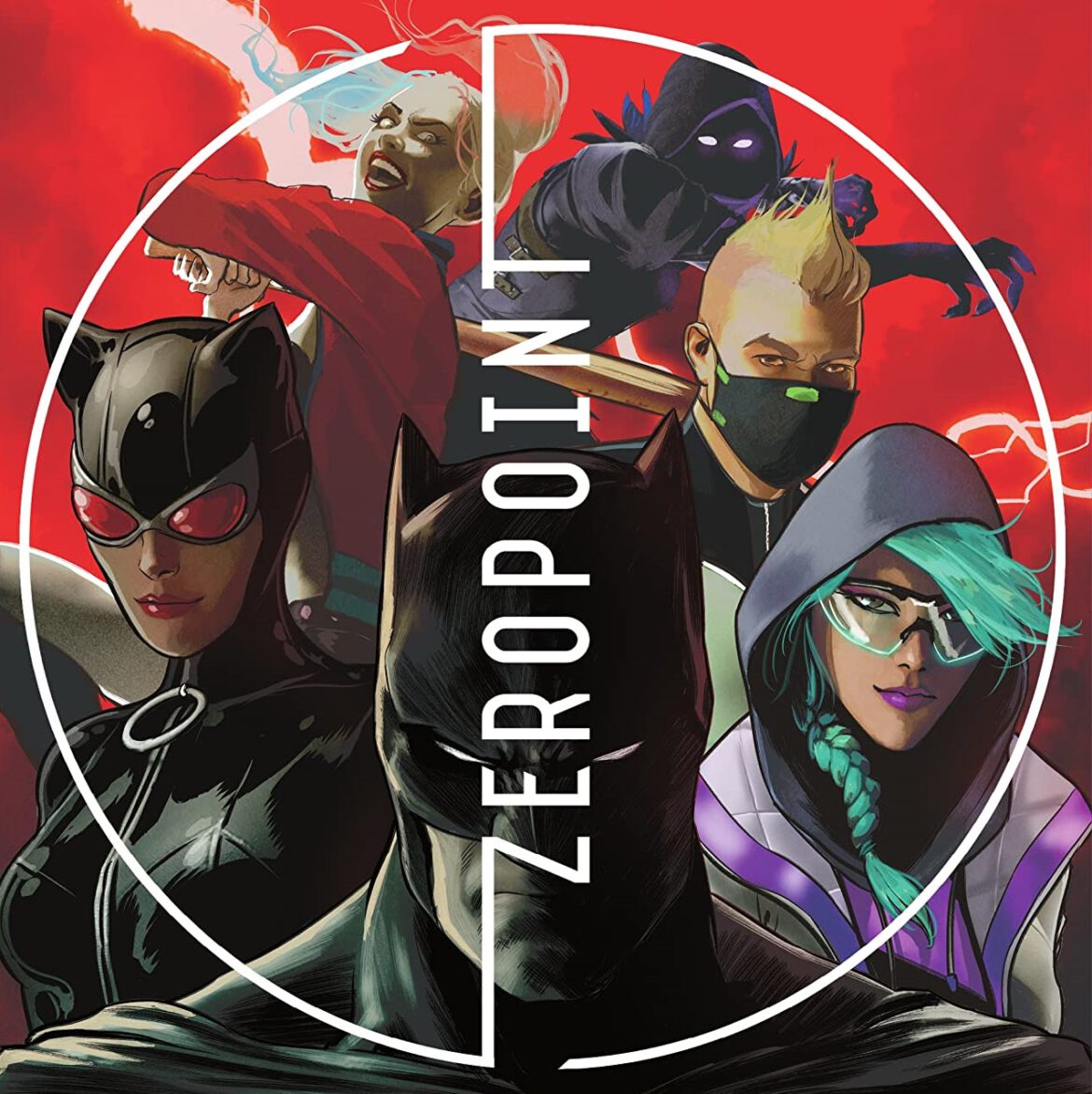 Overview: In Batman/Fortnite: Zero Point #1, after chasing down Harley Quinn in Gotham City, Batman gets transported into the deadly world of Fortnite.

Synopsis (spoilers ahead): We open with Batman and Jim Gordon at the GCPD headquarters talking about the rift in the sky. Batman travels to a rooftop near the rift to figure out what is causing the rift in the sky and Batman sees Harley Quinn standing next to the rift. As Batman gets closer, she starts shooting at him. Harley eventually jumps into the rift after she lands a blow on Batman.

Batman starts taking samples of the rift’s energy when a mysterious figure kicks him into the rift. Losing control of all of his gadgets, he gets sucked into the rift.

Batman awakens into an unfamiliar world and he moves in from the storm closing in on him. As he runs, he is ambushed by an enemy. At this point, he learns that in this world, he can’t talk. He assumes that almost all his memories are gone outside of his fighting skills.

After he defeats the enemy at hand, Batman stands on a cliff looking on into the distance when he takes gunfire and almost gets shot. He jumps down and comes face to face with a roster of Fortnite characters in the midst of battle. As he is fighting the various characters, he finds a familiar feline partner, but can’t remember who she is. He does instantly feel a bond with her, so they team up to fight off the last remaining Fortnite character.

The final storm phase advances. Knowing that they are doomed, they embrace in a kiss as a final goodbye.

Analysis: When this comic series was announced, I was extremely interested in it because it combined two of my interests. This is the first comic review I have ever worked on, as because of the connection between two things that I love I asked my dad if I could tackle this project.

If you didn’t know, this is not the first time DC Comics has collaborated with Fortnite. In 2019, Batman and Catwoman were added to the game as a bundle with character skins and items. Later, characters such as Harley Quinn, Aquaman, Black Manta, Flash, Green Arrow, and Joker were also added to the game. During Batman’s first appearance there was even a location on the map labeled Gotham City.

There is a point in Batman/Fortnite: Zero Point #1 after Batman gets transported to the world of Fortnite and he refers to the moving purple mass as the storm. This is odd as that is how it is referred to in the game. I have a theory on how he knows about the storm. Batman states when looking at the storm, “Storm… moving in.” He also asks if he was caught in the storm. While this could just be Batman acknowledging the storm for what it appears to be, I believe that he has knowledge about this since he was part of Fortnite in-game years ago.

This issue is mostly setting things up for the future as most of the story takes place in the DC Universe. However, once Batman is transported to the Fortnite universe, that all changes.

Earlier in the synopsis, I mentioned the rift in the sky and I think I should expand upon what a rift is. A rift is a crack in reality and is able to teleport things to and from different worlds. This is the explanation of different characters appearing in the game from different universes. Besides DC characters, there have been characters from Predator, Marvel, Star Wars, and GI Joe (which would explain the upcoming appearance of Snake Eyes).

The Batman Universe has a lot of characters that could appear in the series outside of Batman and Catwoman. We can expect Harley Quinn to make an appearance since she also went through the rift. The other character mentioned earlier that have already been included in the world of Fortnite could pop up, but there are a few other ones that you can probably expect. The trailer for the latest season of the game has hinted at Deathstroke being added to the game and an upcoming issue states a “familiar hunter-for-hire” is trying to leave the world of Fortnite. DC has the chance to make a good series with all six issues. But the beginning is just average as we move towards more happening.

Ending with a mention about the art, it was fine. Compared to some of the other comics I have read (and I am by no means an expert art critic), it wasn’t good, but wasn’t bad. The art did the job of making Batman look well in this new unrecognizable world to normal readers of the DC Universe comics.

Last note for those gamers who are interested in it, the code for the Harley Quinn skin included features a more comic version of the character found in this very issue. While a great addition to the comic series (typical skins can range in price from $8-20, with this comic being priced at $5, it’s a good deal), the skin isn’t as good as the previously released Harley Quinn skin. As a reminder, you need to purchase a physical copy of Batman/Fortnite: Zero Point #1 to get the code as digital versions do not include the code.

Though this highly-anticipated comic about the Caped Crusader is good, it's not the best. Hopefully, we will have more questions answered and the story built up. Overall this story grabs your attention but will have a hard time keeping you interested if you are not a fan of the game.