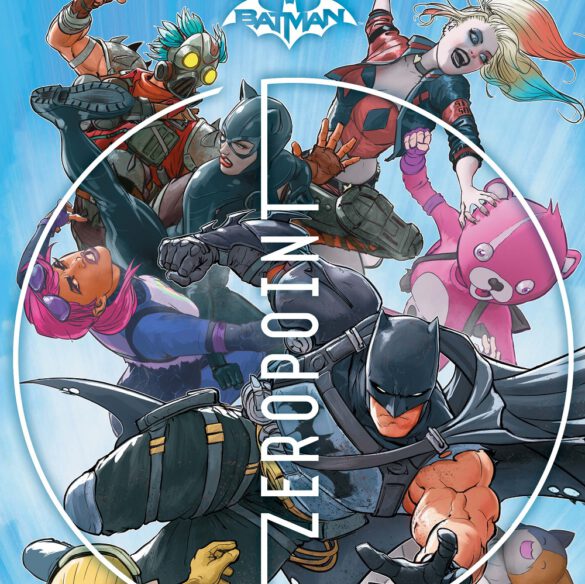 Overview: In Batman/Fortnite: Zero Point #2, Batman fights his way through an endless loop as time resets itself every twenty-two minutes.

Synopsis (spoilers ahead): We open with Batman in a common forest area found in Fortnite. He looks at himself, still not being able to talk out loud, and reads the notes etched into his battle-damaged suit. One note shows coordinates to a shack with a Bat-Symbol marked on the outside. He still has no memory of the past as he immediately encounters the same opponent from the last comic.

After making quick work of the threat, he walks in and sees a note that says the cat is a friend. While he explores the area, he comes across not only Catwoman, but another character that looks like a cat. He senses that Catwoman is the one who is a friend and attempts to help her against the other threats. She instinctively attacks him, but as the purple storm approaches, he shows her a Batarang that says the bat is a friend.

As a new loop begins Catwoman seeks out Batman immediately at the shack from the previous loop. Together they head to the ocean to try and escape the island. But as the storm approaches the loop resets.

The next loop sees the two head to a lake and try and swim to the bottom to find a way to escape. That does not end in a good way as the two exit the lake and Catwoman gets shot. The loop ends with Batman fighting the remaining threats that killed Catwoman.

In the next loop, they head to an industrial area stacks for a vantage point. It is here that they discover Harley Quinn fighting without remorse. As they attempt to help her, feeling some sort of connection to her, she wants nothing to do with them and fights back. The storm approaches again, and time resets.

Batman has a new goal which is keeping track of the phase of the storm. Specifically, how it gets smaller over a certain amount of time. They leave a marker at a certain point and after the loop resets, they head to the same area to discover that the epicenter of the storm is a safe area during the entire loop. (Though this is different in the game as the safe area and storm center change from round to round.)

The two feel hope as the storm approaches and they now realize that escape is only possible for one of the characters battling. Realizing this, they fight together in the next loop until they are the final two left. They embrace each other and Batman insists that she stab him. In his dying moments, he notices that she is transported away before the storm closes in.

The final page mirrors the first page of the issue as Batman with Batman no longer remembering any of the events discovered in the issue and being attacked by the same character as before.

Analysis: Batman/Fortnite: Zero Point #2 is all about discovery. While Batman found Catwoman in the last issue, this time around, he needs to find out all about the Fortnite universe. The entire issue is spent trying to determine how to escape together and then realizing that only one can survive. But even with this discovery, things revert back as before, and in some ways, nothing actually happens. Batman goes back to not knowing things and it can be assumed it is because Catwoman “won” by Batman sacrificing himself.

As a player of the game, I have to bring up some major inconsistencies between what we are seeing here and what is in the game. The last issue showed Batman in his normal bat-suit, while this one starts with Batman in his Zero Year costume (interestingly, this skin released in the item shop on Tuesday night). While a new skin is cool to see, there is no explanation for why that happened. As the rounds occur, Batman and Catwoman do not reset back to how they first appear. Instead, there are various points where costumes change. I don’t know if this is meant to mean something, but it is odd.

The other weird thing is that in the video game, the storm shifts from round to round. It does not end in the same spot every time, though when Batman and Catwoman leave the item behind in the comic, it is not only still there, it lets them know that the area is safe. This is not how the game works. The storm ends in different spots all the time. It could be like this because of the story, but it doesn’t seem to serve a purpose in the end as things still revert back to the same things, even when Catwoman is the last one alive. So as a fan of the game, this is confusing since common rules and expectations of how the Fortnite universe works are being changed for the sake of the story in the issue.

The cover is worth mentioning this time around as a number of characters from the Fortnite universe make an appearance, which will certainly draw in fans of the game. The variant cover by Art Adams and Sabine Rich takes a step farther with even more characters that fans have come to love from Fortnite.

Last note for those gamers who are interested in it, the code this time around is for a glider. The glider appears to be a tattered Batman cape with a small bat-symbol in silver paint. As a reminder, you need to purchase a physical copy of Batman/Fortnite: Zero Point #2 to get the code (or be a subscriber to DC Universe Infinite), as digital versions do not include the code.

Overall this issue was a little better than the first issue since it showed a lot more of the lore of the Fortnite universe while also having Batman discover a little more about what is going on. Though it is better, there still isn't a ton of momentum to keep new readers engaged. So it maintains the same rating as the first issue.