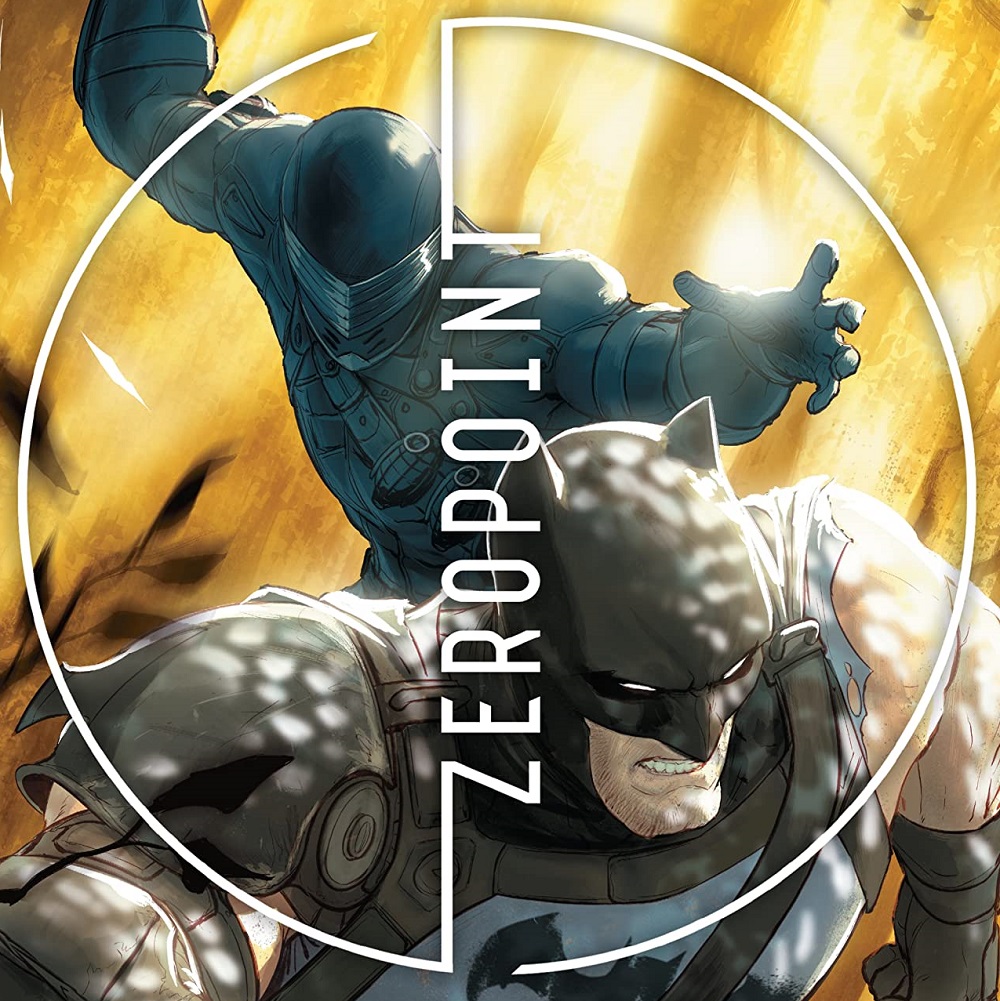 Overview: In Batman/Fortnite: Zero Point #3, Batman finally meets his match at the halfway point of the series.

Synopsis (spoilers ahead): Batman/Fortnite: Zero Point #3 begins with Batman attacking many of the Fortnite Universe characters. This issue is different in that instead of seeing a narration of Batman’s thoughts, we see a series of emails from the Loop Observation to various departments. The observation expresses concern about the asset known as Batman. Batman has been trying to escape the loop after Catwoman escaped as seen in the last issue. The observer also mentions that emotional memories stay and conscious memory don’t within the new loops.

Batman is trying to escape the loop and join Catwoman, even though he doesn’t have memories of her. The “notes” remind him of what to do and push him closer to escaping the loop. While he takes out the other competitors, it is explained that he is not reaching the epicenter in time to escape. Because of him getting closer, the observer requests some adjustments be made to keep him from escaping.

The observer’s request is answered by a new asset being added to the loop. Snake Eyes, from the G.I. Joe universe, appears and becomes the new formidable foe for Batman to face. As they fight loop after loop, there seems to be a shift within the loop. Other competitors are no longer fighting, but rather watching the fight between Batman and Snake Eyes in the various loops.

As the multiple encounters take place, the observer mentions that while memories are not carrying over through the multiple loops, they continue to focus on how emotional memories are. This might be a concern as the observer notes that Batman and Snake Eyes are such good matches for each other that they are beginning to respect each other as competitors. That proves to be the undoing for the matchup.

Respect seems to be an emotional memory that is carrying over through and in this particular loop, Batman and Snake Eyes acknowledge respect for each other. This stops the fight and they begin communicating through sign language. The observer is stunned by this and doesn’t have time to react. Snake Eyes sacrifices himself in a similar fashion to how Batman did for Catwoman and Batman can now escape the loop.

The observer sends another message stating that this was expected, as Snake Eyes was only an attempt to stop the inevitable. Batman heads to an area called the Extra-Loop where he comes face to face with Deathstroke holding Catwoman at gunpoint.

Analysis: Batman/Fortnite: Zero Point #3 has some great moments that seem to be overshadowed by more questions being presented.

In my review of the last issue, I posed the question of how certain aspects were being left behind and Batman and Catwoman only to be found. It was an odd element of the story that didn’t work within the confines of the game. The writer of the series, Christos Gage, responded to my concern on Twitter by stating that the object they left remained in the spot and the readings confirmed it was unaffected by the storm. Another Twitter user posed a question as to how this works since that isn’t how it works in the game and Gage responded that the story was run by Epic Games and they approved it. So either this is something that is minor enough to not be a big deal, or Epic Games missed a pretty big element of their own lore being misexplained.

But this issue presents even more questions. Who was the Loop Observation? Who is the Loop Observation working for? Before going into some other questions I don’t have answered for, this one I might have a theory for. Using the existing Fortnite lore, there is a large organization that is not in the loop called the Imagined Order. This potentially bad company could be observing assets in the loop. This was revealed in the previous season of the game, but very little was revealed outside of their existence.

Now to some of the larger issues. In the last issue, Batman and Catwoman determine that the one way to escape the loop is to be the one survivor. This issue begins with Batman taking out all of the threats, but the element of him needing to travel to the storm epicenter is thrown in as a new challenge. The issue is that this goes against the rules of the game. The game always has a survivor and the storm epicenter (which also shifts from location to location in each match) has nothing to do being at a specific location in order to win. Batman is shown not being able to escape the loop because he isn’t getting to an exact location. But in the game, once all of your competitors are defeated, then you win. I assume that is the same as escaping the loop, as depicted here in this series.

It goes back to making sense once Snake Eyes shows up as the two fight and are evenly matched. However, and this was an issue I had with the past issues, in the game, there is still always a winner. There can’t be a situation where there isn’t a winner. While the story does not have to reflect the exact confines of the game universe, being set in it presents continuity issues for those who have played the game for a long time and know the lore. As someone who has played the game and understands how things work, this series seems to be written for someone who is unaware of these things. My issue is that that isn’t me. When the series was announced, I was interested because I play the game. Now, I am at a point where I am questioning too many things that take away from the story itself due to the conflicts in continuity.

All of that aside, Snake Eyes going toe to toe with Batman is going to be something a lot of fans will want to check out. I think the sequence of events played out in a way that will make both fans of Batman and Snake Eyes happy. I’m not as familiar with the character as some since I am part of a younger generation, but I do remember seeing the buzz about his appearance when Batman/Fortnite: Zero Point #3 it was first announced.

Last note for those gamers who are interested in it, the code this time around is for a pickaxe. The pickaxe looks like a grappling hook but with a Catwoman connection. As a reminder, you need to purchase a physical copy of Batman/Fortnite: Zero Point #3 to get the code (or be a subscriber to DC Universe Infinite), as digital versions do not include the code. It is also worth noting that while you need the code to get the item this is the third issue in a row that the exact same item was available the same day the issue released for purchase in the item shop. While that is great for fans who can’t find a physical copy of the comic, it reduces the exclusivity of the comic and that could be why the first issue was extremely sought after and the subsequent issues have not had the same problem.

I found this issue better than the previous issues because they pitted Batman against Snake Eyes as this was a matchup already present within the game. Also, I think the art was better this time around with more detail put on the characters fighting and their surroundings.