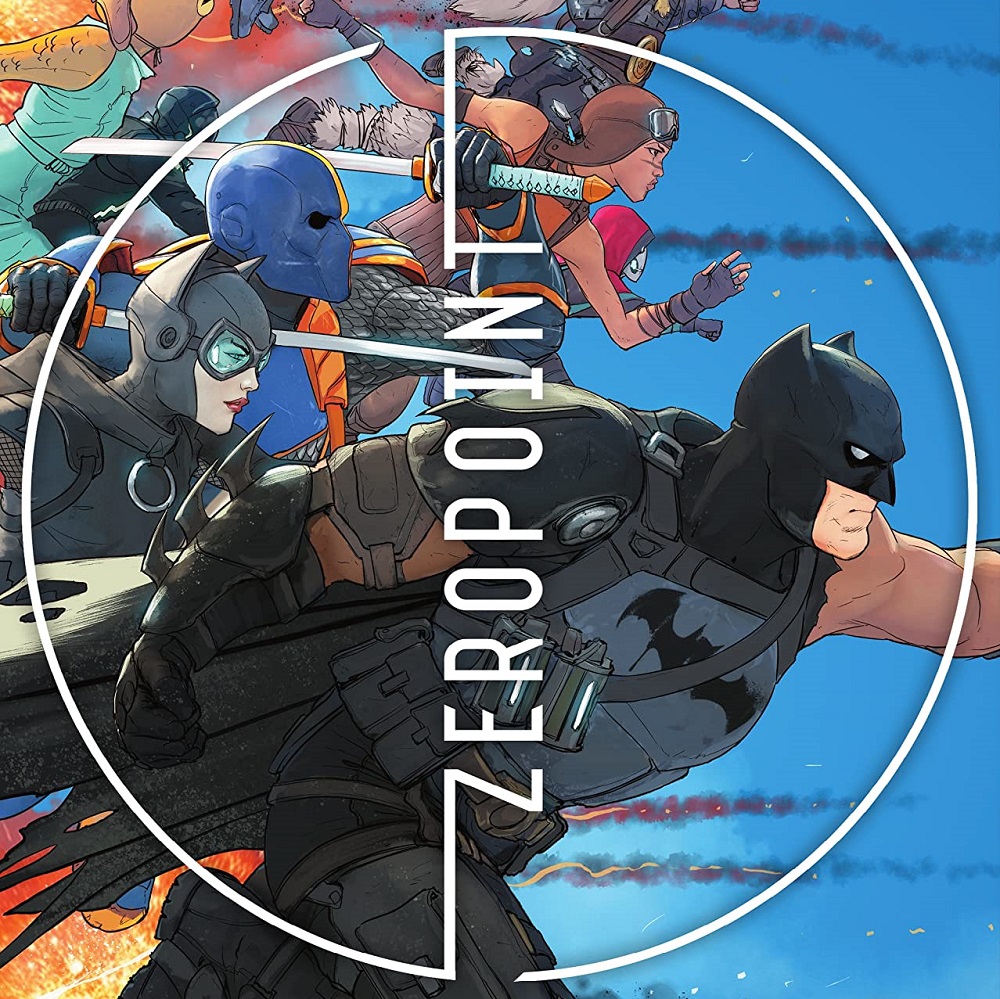 Overview: In Batman/Fortnite: Zero Point #4, Batman teams up with Catwoman, Deathstroke, and a team of other loop escapees to uncover the secrets of the island.

Synopsis (spoilers ahead): Batman/Fortnite: Zero Point #4 begins where the previous issue left off, Catwoman being threatened by Deathstroke in front of Batman, who just escaped from the loop. Batman still has no memories, but Catwoman makes a gesture that allows her to escape Deathstroke’s grasp. Deathstroke responds to being disarmed by surrendering. He informs Batman that he is about to gain all of his loop memories. Batman is overwhelmed by the sudden “download” of memories, but only of his time in the loop and not prior.

Deathstroke states that they need to work together to escape their current situation. He informs them that they are not the only escapees as a team of Fortnite characters who have escaped the loop previously appears before them. A character known as Renegade Raider is the team leader of the group and explains their limited knowledge of their current location. She explains that they tried to escape various ways and have experienced multiple natural disasters, including some that were clearly organized by beings. She also shares an artifact with Batman that they found that hints at the beings teleporting people from various locations outside of the island. This in turn explains the various nature of beings in the loop being incredibly different.

Batman takes charge and splits the escapees into teams. They are given areas of the island to search more in-depth. After a couple of days, more artifacts are found as well as hatches. The hatch is their new focus as Batman attempts to hack it open with an electronic device. Eventually, it opens and they are met by some sort of rock beings. After defeating the beings, they move on and find a stockpile of weapons and ammunition. They also find multiple passageways and they split into teams to explore.

After a short time and Batman and Catwoman coming upon a dead end, they return to the starting point to find Fishstick (a well-known Fortnite character) badly hurt under a pile of rocks that collapsed. Before he dies, he gives Batman a device he found that proves that one of the members of the escapees didn’t actually escape the loop and is working against the team. As Batman/Fortnite: Zero Point #4 ends, a new mystery needs to be solved by the World’s Greatest Detective.

Analysis: Let me start by saying that my previous reviews focused heavily on the issues of continuity between the game and the story being told in this comic series. Now that Batman has escaped the loop, we are no longer in the same situation as a player of the game experiences. The loop is no longer the focus, with the loop being the confines of an actual match within the game. The characters can now talk and, at least some of their memories have returned.

One quick thing to mention is an amusing thing regarding the names of the characters. The Fortnite universe characters all have names within the game, but since they do not talk, their names are never mentioned outside of the item shop. So their names aren’t a surprise, but the fact that the Fortnite characters refer to Deathstroke by his normal name, is quite amusing. Batman and Catwoman are designated Bat and Cat, but Deathstroke gets his full normal name. Amusing.

There are some references to various things that have happened over the course of the game’s existence. Renegade Raider mentions that she has been on this island for four years, which is the same time the game has been around for. The natural or man-made disasters referenced also are referring to major events within the game’s overall storyline. Either way, the mystery of who and how the various characters are getting to the Fortnite Universe is clearly the main mystery that could be resolved by the end of the series.

The final mystery of who amongst the escapee team is the double agent is what we can expect the next issue to focus on. My guess is that it is Renegade Raider. The combination of being the escapee who escaped first and the fact that she is feeding most of the learned knowledge to Batman, makes me think that she is the double agent. We will most likely see this resolved in the next issue.

Last note for those gamers who are interested in it, the code this time around is for a glider. The glider appears to be themed for Deathstroke, the character who has the latest appearance in the comic this time around. As a reminder, you need to purchase a physical copy of Batman/Fortnite: Zero Point #4 to get the code (or be a subscriber to DC Universe Infinite), as digital versions do not include the code.

While the comic series continues to be confusing and strange for a longtime player of the game, the new lore explored, outweighs the previous inconsistencies with the continuity. As we unravel the history and secrets of the island, I'm on board even if I feel lost at times.