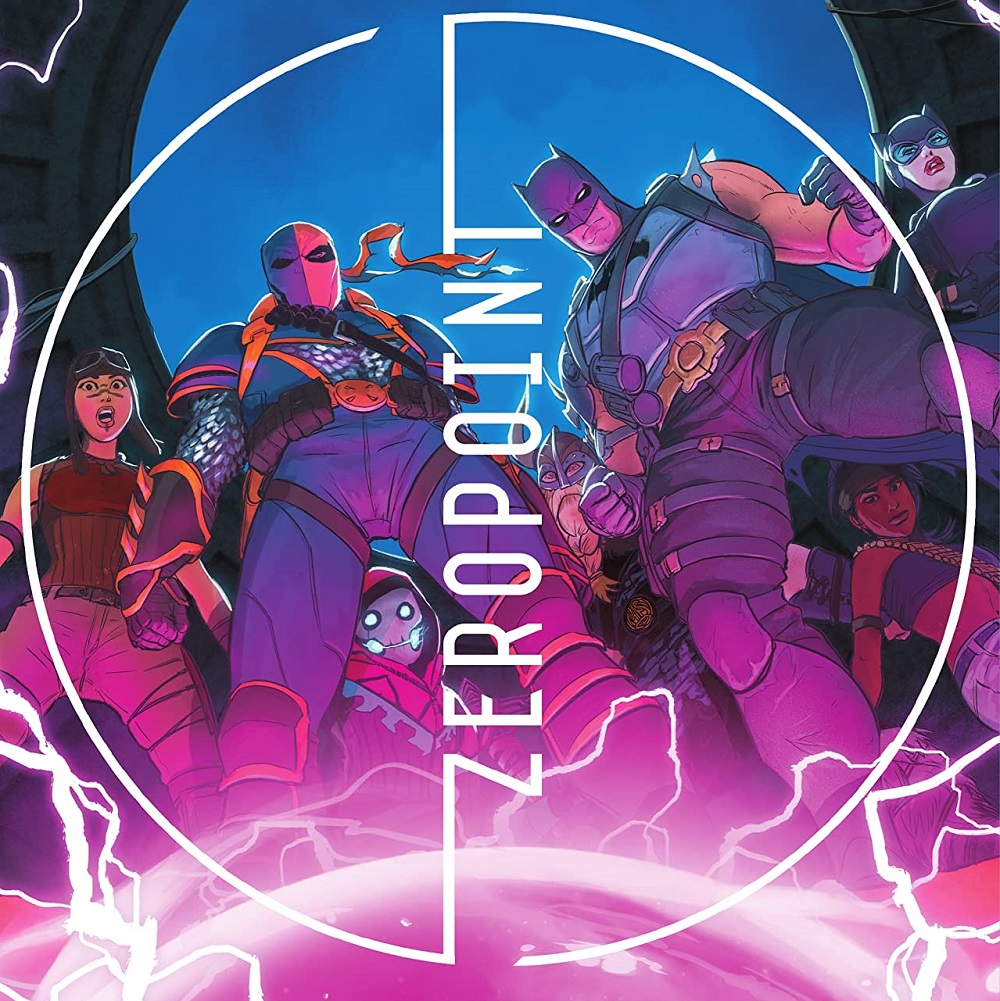 Overview: In Batman/Fortnite: Zero Point #5, after getting through defenses, the team makes their way back to their home universes.

Synopsis (spoilers ahead): As Batman/Fortnite: Zero Point #5 begins, the escapees are pinned down by guards for the IO (imagined order, as revealed through the game and not the comic series). When all seems hopeless, Batman and Catwoman join the team of escapees after their encounter with Fishstick (as seen at the end of the last issue). As they fight off the enemies, they question what they could be defending.

After evading other patrols of guards, they come to an ancient meeting room. Batman discovers artifacts that show a map of various stars and planets overlapping. As the guard patrols approach, they must move on to keep them from being cornered.

It turns out that being cornered in the meeting room was the least of their issues as the team is now cornered between two corridors. After Deathstroke suggests a plan using liquid nitrogen capsules from Batman’s utility belt, they block off their exit from the direction they came from using the capsules and Deathstroke’s staff. They fight their way through the other direction towards their only way out.

They come to a room that is not guarded and see a purple energy signature. The character known as Eternal Voyager hastily jumps into it and gets split into multiple realities. The remaining team determines that this is the Zero Point and is their only way back to their home universes.

Hours pass and they believe they have calibrated the machine to return them to their home universes. After Renegade Raider passes through successfully, Batman confronts Deathstroke on being the traitor amongst the team. He states that he killed Fishstick to cover up working for the people in charge. He also mentions that he still has his memories since he asked for the liquid nitrogen capsules from Batman, even though Batman never used them in front of him in this reality.

Deathstroke admits to working against the team and immediately fractures the team by stating that anyone who sides with him, he will guarantee their return. The team battles each other and eventually Deathstroke calls a truce in order for everyone to get back home. The Fortnite characters all return to their universes leaving Batman, Catwoman, and Deathstroke remaining. As Batman readies their return, Deathstroke betrays the truce and heads back to the universe by himself leaving Batman and Catwoman alone together with no way to return home.

Analysis: Batman/Fortnite: Zero Point #5 is the best comic of the series so far. The reason it is the best so far is because of the amount of action that occurs. Yes, the early issues had action happening between Batman fight alongside Catwoman against the Fortnite characters, but this felt like the action was moving things forward towards a goal, while the early issues felt like a continuous loop leading nowhere.

We are shown the IO’s underground base, which is not the first time an IO base has been seen (as it has appeared in the game in the past) this base has a unique look not previously seen. The Zero Point room also has been seen in a cutscene in a season trailer. The elements brought in from the game are intriguing since the previous times these things have been seen, they are mysteries.

The other big reveal in Batman/Fortnite: Zero Point #5, is that Deathstroke was the traitor. I wasn’t expecting him to be the traitor, but given the series is set alongside the DC Universe, one could assume that a DC Universe character plays a role in the overall plot rather than the lesser-known Fortnite characters.

One thing that might confuse readers is why exactly Batman and Catwoman are stuck. Right before Deathstroke jumps into the Zero Point, he pulls out something they call a compass in the comic. In the game, this is actually called a Rift Gun. This device opens and closes universes whenever the person who has it uses it. So the idea here is that Deathstroke is closing off the DC Universe from Batman and Catwoman after passing through the Zero Point. Makes Deathstroke seem really evil to strand the two in the Fortnite universe, but we still don’t know his motives for working for the people in charge yet, outside of him typically being an assassin for hire. Either way, I’m excited to find out what Catwoman and Batman will do to get home.

Last note for those gamers who are interested in it, the code this time around is for a Harley Quinn backpack. The backpack appears to be themed for Harley Quinn, with a Jack-in-the-Box being the item featured. As a reminder, you need to purchase a physical copy of Batman/Fortnite: Zero Point #5 to get the code (or be a subscriber to DC Universe Infinite), as digital versions do not include the code.

While the story still seems to move slow considering there is only one issue left, this issue moved things forward and was the highlight of the series so far.