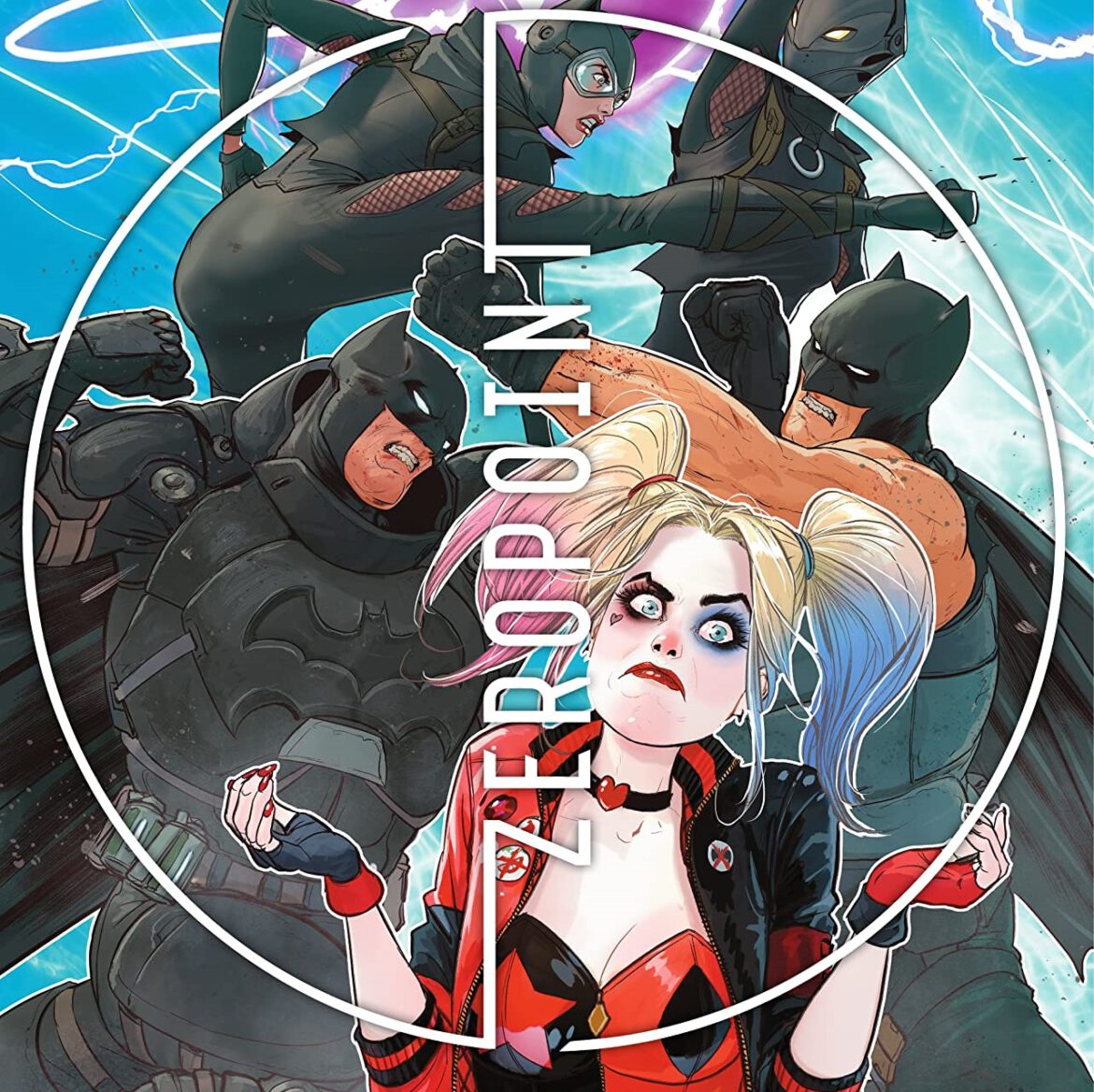 Overview: In Batman/Fortnite: Zero Point #6, will Batman and Catwoman be able to get home and uncover the secrets of who is behind everything?

Synopsis (spoilers ahead): Batman/Fortnite: Zero Point #6 picks up right after the last issue with Batman and Catwoman stuck in the zero point chamber. The portal closed back to the normal DC Universe, but reopened back into the loop.  Catwoman says she managed to get the rift gun from Deathstroke before he went through the portal, but it is beaten up. They decide they need to seek out a third person to have enough energy to return to their homeworld.  Batman remembers Harley Quinn from the loop. Getting her is their only hope of getting back to Gotham.

They jump into the loop, and despite having issues before, they have no problems with their memories being lost. They hook onto the Battle Bus (the vehicle that brings you to the Fortnite island) and they see Harley fighting multiple people at once. They approach her afterward and decide to knock her out as trying to reason with her is pointless. She puts up a fight simply because she doesn’t want to go back home. The surprise is that she has the ability to talk, unlike the other combatants in the loop.

After a brief back and forth, Batman knocks her out and Batman and Catwoman discuss how they will use her to open the portal when duplicates of themselves appear. They use the rift gun to head back to the portal room and Catwoman questions whether or not they should return to their homeworld since they are happy together in this new world. Before they have a chance to discuss it at more length, Harley wakes up and escapes. Catwoman says there is no point chasing her since the portal to Gotham has already been opened. Catwoman says how she doesn’t want to lose what they have with each other. Batman says how he feels like people are counting on him in Gotham and how they must go through.

They arrive in Gotham and the rift closes. They get their memories back and they see their history together. Catwoman is hurt by this and says they should have stayed there. Batman returns to the GCPD and talks to Jim Gordan. He says he saw Deathstroke but he escaped before they could get him. Batman says that Deathstroke had to be working for someone.

We cut to Metropolis at LexCorp we see Lex Luthor and Deathstroke talking about the zero point. Deathstroke planted an anchor device so that they can harvest power from the zero point. Then the Batman Who Laughs chimes in and says how they all got what they wanted crediting him for the plan. Then Lex says that the Imagined Order got everything it wanted. We are shown the leader or Imagined Order (or I.O.) as she states that they held up their side of the deal with a rift outside of the Daily Planet appearing in the sky.

Analysis: Batman/Fortnite: Zero Point #6 has huge implications and tons of things that I like with both elements from the DC Universe and Fortnite.

One of the coolest elements in the issue is the scene when Batman and Catwoman return to Gotham City and we see snapshots of their history. The other moment is how we see Lex Luthor and the Batman Who Laughs show up at the end with Doctor Slone, the leader of I.O. This character is a new character intended for the game and I think that we can expect to see the character in the game in the future. In the last panel, a rift appears in Metropolis. This also might have something to do with how Superman is planned to appear in the game later this season.

The catch is that with the presented ending, it seems to leave the door open for another DC crossover with Fortnite. While not a guarantee, it seems there is more story to tell with the introduction of Lex Luthor and Batman Who Laughs. While the rift could explain Superman’s appearance in the game, it is unlikely that the story would introduce these major DC Universe characters to not have more story to tell. As for the game, this could introduce possible Superman villains into the game in the near future since Superman has already been revealed to be coming to the game.

Whether or not the story includes Batman in the future remains to be seen. This miniseries seems to close the book on Batman’s involvement for the time being. The Batman Who Laughs has been used as a more DC Universe villain rather than a specific Batman Universe villain, so a Superman focus for a possible second series is more likely.

Overall, despite some of my issues with the lore of Fortnite depicted in the early issues, I enjoyed the series and it ended on a note that leaves me excited about more potential crossovers.

Last note for those gamers who are interested in it, the code this time around is for a Batarang Axe. Also, if you collected all six codes you get an Armored Batman Zero skin. As a reminder, you need to purchase a physical copy of Batman/Fortnite: Zero Point #6 to get the code (or be a subscriber to DC Universe Infinite), as digital versions do not include the code.

Batman/Fortnite: Zero Point #6 ends on a high note for me. Despite issues with the story early on, I'm excited to see what other DC Fortnite crossovers can bring.