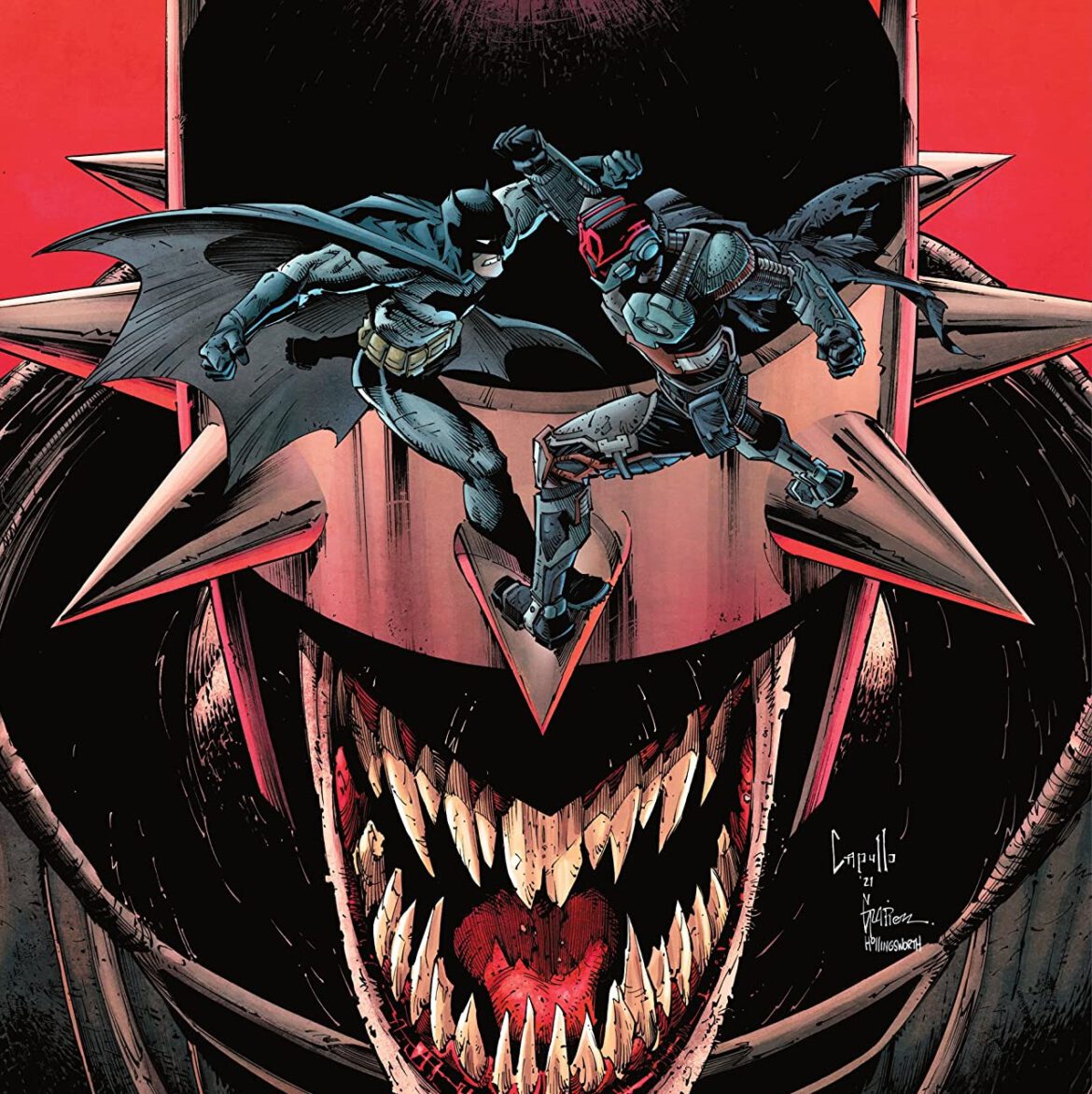 Overview: In Batman/Fortnite: Foundation #1, Batman finds a new ally from another universe and prevents DC super-villains from entering the world of Fortnite.

Synopsis (spoilers ahead): As Batman/Fortnite: Foundation #1 opens, we see a number of heroes battling villains in Metropolis. Superman is going against Bizarro, Wonder Woman is taking on Chemo, and Flash against Reverse Flash. Lex Luthor tells the villains that they need to keep fighting to break through the defenses. Batman Who Laughs is about to kill Plastic Man when Batman contacts the League. He is coming from Gotham to stop whatever is happening from the Rift forming in the sky of Metropolis. The Rift is causing an energy surge and the Justice League is unable to stop it from occurring while dealing with all of the villains.

In Gotham City, a new character named Foundation has appeared. Batman arrives and states that he wants answers. Foundation and Batman clash as they don’t know enough to realize they are on the same side. Once Zero Point is mentioned they realize that they are fighting the same enemy and call a truce. They head towards Metropolis together.

On the way, Foundation tells Batman about how the big bang was actually the Zero Point and that it created all kinds of other universes, and that the Imagined Order has been traveling from universe to universe for a long time gathering knowledge and creating portals.

When they arrive in Metropolis they are confronted by Chemo. Foundation gives Batman a gun to close the rift, but Chemo distracts the group from the current plan. Foundation launches Chemo into space prior to him causing any more damage to the city.

Batman communicates that the Rift is getting closer and he needs help from Foundation. Foundation believes it could be a trap knowing Clayface is a shape-shifter and does a DNA scan to confirm that it is Batman. The catch is that it is actually Batman Who Laughs and Foundation has been tricked into bringing him directly to the Rift. The gravitational pull brings the Batman Who Laughs along with Foundation to a new universe.

As the Rift closes, Batman Who Laughs attacks Foundation and cracks his helmet preventing him from being exposed to the environment and in turn losing his memories with each loop. Foundation attacks Batman Who Laughs and knocks him out. He radios to Batman to trigger the device he gave him earlier to deal with the Rift.

Lex Luthor decides it is time to move on as he is ultimately happy to be rid of the Batman Who Laughs. He creates a force field for the villains to escape the League. Batman tells the League that the Loop may be the best prison to hold Batman Who Laughs as anyone he kills will come back within minutes.

Foundation departs as the Loop resets in search of someone named Jones. Batman Who Laughs rises and expresses that his plan has gone better than he expected. He is attacked, but seems to love the fact that he is in this new world. His visor protects his memory from being reset and he looks forward to putting his spin on the characters of this new universe.

To cover some of the confusing things for those who don’t play the game or may not have read the previous miniseries, Zero Point is a transportation method from one universe to another. Snapshots are a copy of a being that has entered the Loop. The Rift originally appeared in the game as a portal that transported players from one place to the top of the map. Here, it is a crack formed by the Zero Point to connect the DC Universe to the world of Fortnite. The Imagined Order (I.O.) is an organization that has been manipulating things in various universes. They were also a main plot point in the previous series.

It is difficult as a reader to know all of these references without a ton of exposition. The comic gives some idea of what these different things are, but not enough for people who have never played the game. It makes the comic perfect for players of the game, but probably not the casual reader of the DC Universe. There is only one editor’s note and it references Death Metal, but the notes are not used to explain other things from the world of Fornite.

The main thing is that I am a player of Fortnite and a reader of various DC Comics. So this comic is really meant for me. My rating will be higher than some who are not involved with both universe, but seeing all the characters and the potential future with the Batman Who Laughs is something that I found great.

One final point for Batman/Fortnite: Foundation #1, Batman Who Laughs is a character that I am not super familiar with and this comic made me want to find out more. A psychopath Batman is something that is different and interesting and I look forward to learning more about the character. (I guess this may have been DC’s hope with combining the two universes and seeing fans of each discover new elements that lead to more involvement.)

Unlike the Batman Who Laughs giving Foundation five stars for his ride to the Rift, I have to give the issue a four out of five, as the comic expands on the DC Fortnite lore without a ton of promise for the future.