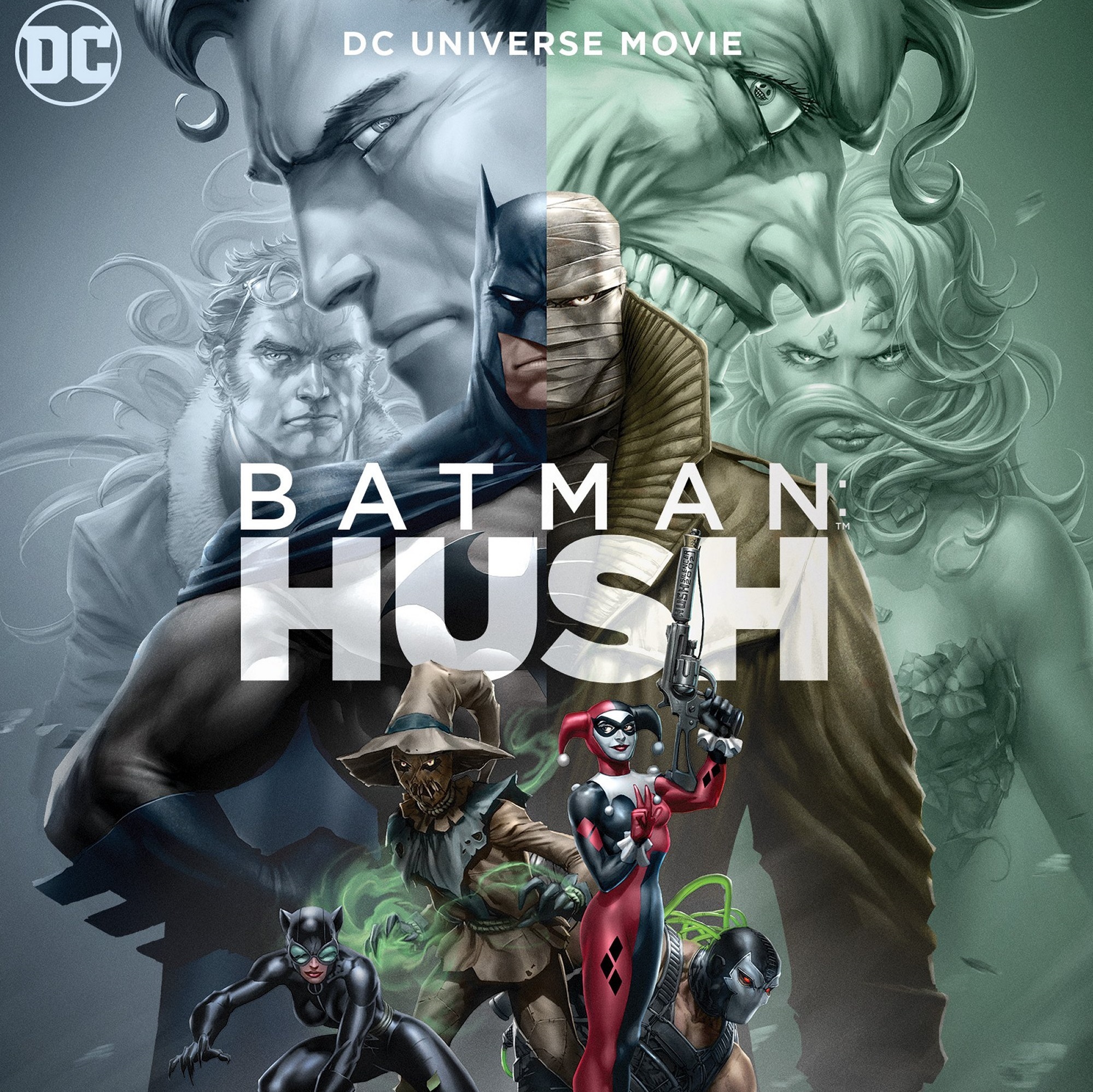 Overview: The 2002-2003 storyline “Hush” is adapted in the latest DC Animated Universe film.

Synopsis (spoilers ahead): A kidnapping leads Batman into a plot involving a shadowy figure named Hush manipulating Gotham’s villains, including Bane, Poison Ivy, and the Joker to take down the Dark Knight, while Bruce Wayne reunites with a childhood friend, Dr. Thomas Elliot and Batman begins a romance with Catwoman. As the trail leads Batman from Arkham Asylum to a Metropolis showdown with Superman and back to Gotham, Batman and Catwoman grow closer as Elliot is murdered. Hush continues to maneuver the pieces of Batman’s life leading to a showdown where the bandaged villain is revealed to be the Riddler in disguise, which leads to a battle at an exploding chemical factory where Catwoman sacrifices the Riddler to prevent Batman from dying during an attempt to save the Riddler from a fiery death.   Confronted by the reality that Batman is incapable of changing or diverting from his code, Catwoman walks away from Batman, with the door left open that maybe things will be different… someday.

Analysis: When Hush was first published in 2002-2003 in the pages of the main Batman title, it was a blockbuster event, pairing writer Jeph Loeb, no stranger to Batman or yearlong mysteries like “The Long Halloween”, with superstar artist Jim Lee in his first real work on Batman after selling his company, Wildstorm, to DC Comics. Fans were not only raving about one of comics all-time great artists drawing Batman, but had fans wondering just who was the bandaged villain, Hush, as they attempted to solve the mystery alongside Batman, filling message boards and internet chat groups with fan theories about Hush’s identity. I remember reading a preview of the opening sequence of Batman rescuing a boy from Killer Croc and some hired thugs, reading Loeb’s pitch-perfect Batman narration and staring at the gorgeous art, thinking that this was going to be something special. It’s a story that has become required reading for most Bat-fans.   I know several people who aren’t comic fans who still have a copy of the trade paperback for Hush on their bookcases, and if someone came up to me today who had never read a Batman comic book and asked me for a recommendation, Hush is the book I would put in their hands.

However, the thing about Hush is that it’s really more of a “greatest hits album” then a great story. It’s a book that is concerned with big reveals and touching on every corner of the Batman mythos. It has different characters popping in and out throughout the story with little or no setup. As much as I still enjoy the book, it stumbles in its final few issues. The return of Harvey Dent feels wasted and Harold’s involvement comes out of nowhere without any setup either. Hush doesn’t really get a lot of time in the story, relegated to hanging in the shadows quoting Aristotle, and the reveal in the last issue that Hush is Tommy Elliot feels like the creators were giving themselves an out as to Hush’s identity, with Hush never actually taking off his bandages.

It’s with all this in mind, that I sat down to watch the latest DC Animated Universe film, Batman: Hush which adapts the twelve-issue story into an eighty-two-minute movie set in the same animated continuity of other films such as Batman: Bad Blood and the Death of Superman. I wasn’t surprised that the filmmakers chose to set the film in continuity, but I was surprised that the changes that the film makes to fit the film in the world that it had already established were all fairly minor and seemed to have more to do with streamlining the story for pacing purposes than anything else. Ra’s Al Ghul and Talia are removed from the story in favor of Lady Shiva showing up briefly to give Batman the information about the mystery of the unauthorized use of a Lazarus Pit, for instance.

The film, directed by Justin Copeland, who previously storyboarded other DC animated films such as the flashback sequences in The Killing Joke, definitely leans into the visuals from the source material, and the majority of the character designs feel like the Jim Lee designs for the characters streamlined for animation.   I appreciated how the film does away with the DC Universe’s take on the Bat-suit early on in favor of the “Hush” year one inspired costume that Batman wears in the comic. I’ve never liked the look of Batman in these DCAU films as I thought it always seemed just a little off-model with touches like Batman’s chin guard, and seeing Batman with a more traditional look was a welcome change.   I don’t think they really needed to come up with a story reason for the change but “post-surgery head protection” is as good as any a reason to put Batman in the costume. I do have to wonder why the filmmakers chose to not put Superman in his traditional outfit, although at the very lest they chose for the more movie-inspired “Rebirth” look for the character as opposed to the high-collar number he’s been wearing in previous films.

The film adheres fairly closely to the source material for the first half of the film with a few minor story tweaks. Killer Croc gets traded out for a Poison Ivy-controlled Bane, which is a fun nod to Bane’s time as a mindless Poison Ivy henchman in the cinematic gold that is “Batman and Robin”, and its essentially a case of swapping one character for another. Huntress is removed from the story in favor of a Batgirl cameo, which seems like it was done to fulfill the promise that Batgirl made in the end moments of the last Batman film in this series, Batman: Bad Blood. I liked seeing Babs pop up here, but she seemed far surlier then we are used to seeing her character. It was odd to see her pop in, clearly knowing Batman’s identity but being weirdly standoffish with Nightwing and Alfred. I have to wonder why they didn’t just bring back Batwoman for the quick scene.

Where the story takes a hard-left turn is after the Batman reveals his identity to Catwoman, which starts a sequence of events that leads to Hush being revealed as the Riddler, driven mad by his cancer-curing dip in the Lazarus Pit. This is a change that has already led to some controversy, with Tommy Elliot in this version being an innocent victim instead of its big bad. In the original story, the Riddler is the architect of the plot against Batman, with Hush doing the heavy lifting.   I like the change that this film makes, making Riddler the sole villain of the story.   I don’t think that Hush has ever been a terribly compelling villain and his motivations in the source material have always seemed paper-thin outside of Paul Dini and Dustin Nguyen’s fantastic Heart of Hush storyline. Turing Hush into an outlet for the Riddler to seek revenge, not only on Batman, but on the Gotham Underworld who has written him off as a joke, makes sense for this story. I think it’s an interesting extension of the Riddler’s insecure need to be thought of as a superior intellect.

Where the film really shines is in the relationship between Batman and Catwoman. In the original story, their relationship is relegated to the occasional kiss while they work through the mystery of the story. The film, on the other hand, gives the relationship space the breath, which gives the end of the story far more weight. I like how the film has the two characters circle each other, leading eventually to Bruce and Selena making an actual go of a relationship in the back half of the film. Much like the original story, the film ends with the end of their relationship, but in this version, Catwoman walks away from Batman after seeing how Bruce is unable to change. It does seem a little contrived that Catwoman would have been surprised that Batman would try to save the Riddler to the point that it would end their relationship, but it works for the story that they are telling here. Overall the most telling sign that the film does a successful job with the Bat/Cat relationship is that, despite knowing how the original comic ends, I was disappointed that it fell apart in the final moments of the film.

The voice cast, by in large, does an admiral job. After now having several films under his belt, I’ve come to appreciate Jason O’Mara’s Batman and he does solid work here as both Batman and Bruce Wayne.   I liked Jennifer Morrison’s performance as Catwoman and enjoyed how her voice changes from being more aloof and playful at the start of the film to a more grounded and genuine tone in her later scenes after Batman and Catwoman become an item.   James Garret’s Alfred felt like the odd man out in this film and I found myself missing the warmth that other actors have brought to this role.

The extras that accompany this film are fairly standard apart from a “Sgt. Rock” short film. I was surprised by how much I liked it and turned out to be a fun treat that I didn’t realize I wanted.

Final Thoughts: There is a skill in adapting a story between mediums. While there are plenty of fans out there that want no liberties taken with a given story, I think there is something to be said for telling a familiar story that is true to the spirit of the source material while making changes to make the story fresh and entertaining, which is right were this film lands.

Editor’s Note: Batman: Hush is now available on Digital HD, Blu-ray and 4K. You can order your copy, and help support TBU in the process, by heading over to Amazon.