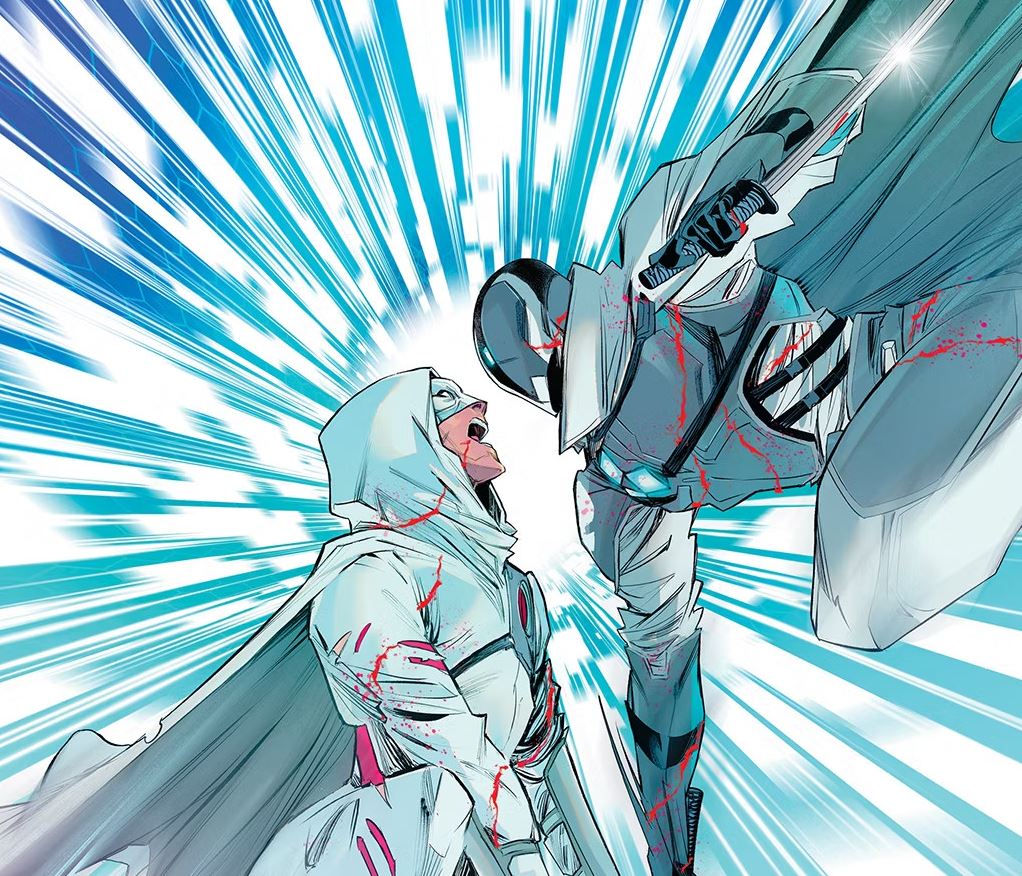 Synopsis (spoilers ahead): Batman Incorporated #4 begins somewhere over the pacific as Ghost-Maker is flying his ship trying to find Clownhunter. Finally, his signal is picked up at headquarters, and Ghost-Maker flies his way. As he is flying, he checks in on the different groups.

In Moscow, Knight and the Fallen are fighting in the apartment, trying to bring Avery to justice using their own methods. During the fight, Wingman is still knocked out from the drugs he drank in the previous issue. The Fallen uses her Xylazine-laced claws to break through the Knight’s armor and pierce her skin, effectively ending the fight. The Fallen calls in for extraction on the rooftop and brings Knight and Wingman to a ship that features Lex Luthor’s symbol.

At the Central Suriname Nature Reserve, Jiro and Gray Wolf are fighting Hollow, which results in Jiro stabbing the Hollow. Hollow questions their violence since he helped them when a huge light appeared above them.

El Gaucho and Raven Red, in British Columbia, are passing blows on Fissure. El Gaucho gets a hold of Fissure when Raven Red takes a knife and slices some wires, stopping electricity from traveling through Fissure’s suit. Fissure explains that he and the other vigilantes that Lex Luthor created had been given the opportunity to get revenge on the people who wronged them. Raven Red questions Phantom-One’s connection, but the ship with Lex Luthor’s symbol shows up, and Hollow, Fallen, and Oryx step out to make the save for Fissure as they tranquilize El Gaucho and Raven Red and bring them on the ship.

In Dublin, she thought the city needed its own Batman-like vigilante. She took the role and fought the gangsters. They didn’t like wasting their money, so they sent Tommy Tivane to take her down. He succeeded and paralyzed her. After she recovered in the hospital, she was sent to prison for five years with the worst of Ireland. After serving her time, she faked her death and built an exoskeleton to walk again. With her rage, she looked for Tivane, eventually following Palladium. One night she saw Ghost-Maker turn his back on Phantom-One. So she nursed him back to health and, as time passed, saw that Ghost-Maker was painted as a hero in Gotham City. They both wanted to expose him for who he was.

Back to the present, Clownhunter appears with a barbed wire baseball bat and is told to kill Ghost-Maker to be free finally.

Analysis: If you didn’t know this series was continuing past the current arc, you would assume this was the penultimate issue of the series. It isn’t, but it certainly feels like the team is falling apart at the seams and will dissolve after dealing with Phantom-One and Lex Luthor’s team. From the team having doubts about their mission to Clownhunter, you have to wonder how this team even existed in the first place. The series starts with the members having issues with each other, but it is odd to see the leader taken down early in the series.

The next issue could end up being a big battle for the soul of Batman Incorporated, with some members of Luthor’s team joining the main team going forward and having other members go their separate ways. Will there be any deaths this early? It almost seems like the cast is too big, and with little character buildup for anyone outside of Luthor’s team and Phantom-One, it feels like we could see a death for the sake of thinning out the ranks, as most Suicide Squad series do (even if they come back in the future).

After Batman Incorporated #4, you have many questions with few answers. It speaks to the upfront story but leaves less to build on without adding more characters to the series. It is still an action-packed read, but hopefully, once this arc wraps, we will learn more about the team members rather than just creating even more new characters.

I like how the story is wrapping up and also leaving us with cliffhangers. I think the writers have been doing a good job with these comics and I look forward to the next issue.