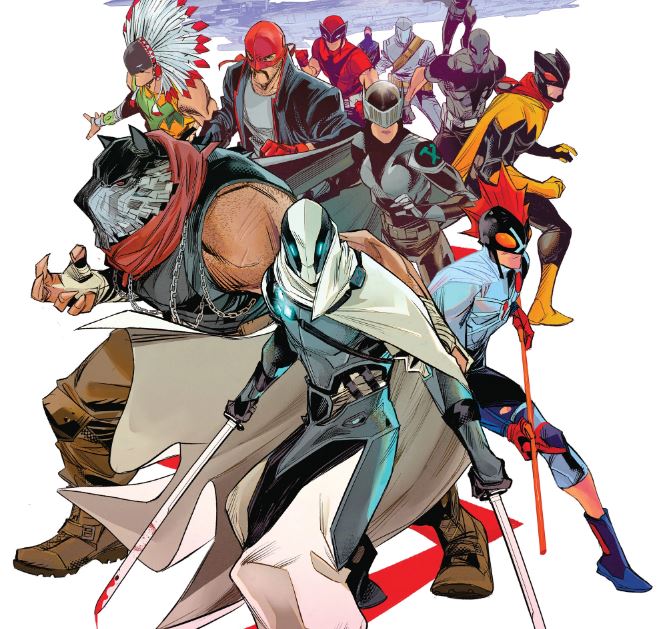 Overview: Batman Incorporated #1 begins DC Comics’ newest iteration of the team under the leadership of Ghost-Maker. There’s a serial killer stalking victims with one thing in common… they all trained Batman and Ghost-Maker.

Synopsis (spoilers ahead): Batman Incorporated #1 begins in Dublin, Ireland, as Tommy Tivane is on the run from someone. As he reaches a dead end of an alley, he realizes there’s nowhere else to run. He pulls out a knife and turns to face his assailant. He’s not going down without a fight. Moments later, Beryl Hutchinson, the new Knight, arrives at the scene to meet the authorities and Black Mist, an Ireland-based vigilante. The two walk into the alley, where they find a now-dead Tommy Tivane hanging on the wall, knives driven through his and into the brick wall. They find a note has been left in his mouth.

In Buranda, Nyasir, Ghost-Maker and members of Batman Inc’s core team arrive at the site of one of Lex Luthor’s labs that was used for creating his own version of Batman, Inc., only to find it emptied and destroyed. Ghost-Maker orders the team to tear everything apart to find any ounce of evidence. They have no luck in doing so until Dark Ranger finds a tube with a note in it. The team is “TOO SLOW.” Knight calls into Ghost-Maker. They need to get to Ireland as soon as possible.

In Rio, professional driver Don Miguel is being chased through the streets. The streets of Rio are his. He pulls out a gun while the car door opens and begins firing at the approaching vehicle. It doesn’t stop. Instead, it destroys Don Miguel’s car by ramming it. As the injured Miguel exits the vehicle, he recognizes his assailant. But he’s unable to do anything. A sword is driven through his back.

Back in Ireland, Ghost-Maker and the rest of Batman Inc. are at the scene of Tommy Tivane’s murder. Knight hands him the note found in the victim’s mouth. “The student has become the master,” it says. Ghost-Maker turns and walks away in deep thought. The rest of the team watches, wondering about the man handpicked by Batman to lead them. El Gaucho is the most upset of the group. It is he who should be the one leading the team due to his seniority. Alone, Knight asks Black Mist to consider her invitation to join the group. There is too much masculinity going around.

Back of the Ghostship, Clownhunter approaches the team’s leader. Ghost-Maker reveals there’s a connection between the death of Tommy Tivane and those currently being reported on the TV monitors. They all trained him… AND Batman. Now that he knows this, their new mission is to protect the remaining teachers from meeting their demise.

In Moscow, Knight and Wingman are on surveillance, looking out for Avery, the former KGB spy known for her ability to disguise herself as anyone. She enters her penthouse surrounded by armed guards, but quickly realizes that they are not alone. The two heroes pounce, taking on the armed guards. Knight gets herself close to Avery and said that the duo is there to help. But “Avery” is everything but. She’s a decoy. The real Avery has a gun to Wingman’s head. She was disguised as one of the guards and can’t believe that Ghost-Maker would send someone to kill her instead of doing it himself.

Batman Incorporated #1 continues in Suriname as Gray Wolf and the Batman of Japan search for another of Batman’s and Ghost-Maker’s teachers – a master trap builder. Unfortunately for them, he finds them first after they fall into a trap built to catch them. El Gaucho and Raven Red are in British Columbia, looking for another mentor – this one a master chemist who trained Batman and Ghost-Maker in making their smoke bombs and explosives. They’re too late, however, as they find the man dead. The killer has left a message for them – NO MORE TEACHERS.

Back in Dublin, Black Mist and Dark Ranger continue the investigation into the death of Tommy Tivane. Dark Ranger finds that there is more than one trail of blood. Perhaps he was able to injure his assailant before he died. Black Mist finds a sword amongst the rubble in the ally and shows it to Dark Ranger. The sword has the symbol of Ghost-Maker on it.

In Shanghai, Ghost-Maker and Clownhunter are on the trail of Skyspider. Ghost-Maker feels it shouldn’t take long as his former teacher probably knows that they are already in the city. He asks Clownhunter to stay back as he jumps from a skyscraper, calling out for his former mentor. It doesn’t take long for him to find Skyspider as his line is cut. As he plummets from the sky, Skyspider falls on top of him. She can’t believe he is stupid enough to come after her.

Analysis: Batman Incorporated #1 was a pretty decent second issue to the series. Yes, I said second issue. While this issue does a good job of setting up the story arc, Brisson’s story in Batman 2022 Annual #1 sets up the series. So, if you haven’t read it yet, go back and do so (or at least read Scott’s review). One thing that I truly appreciate in this story is that we are getting something that I hoped for in the current continuity of Batman – the integration of Chip Zdarsky’s the Knight mini-series. Zdarksy’s story is showing Batman in a whole new light, and it is good to see that Brisson is picking up on this as a part of his run. As a side note, this also confirms that the Knight is a part of Zdarksy’s universe, confirmed with Ghost-Maker telling the team that Batman is currently unavailable in Atlantis (as he is in Batman #128). It’s good to see the Batman team of writers meeting up again. This helps with the flow of the universe. But I also think it sets up something I’ve talked about in the past.

So, one would think in the beginning that this is a typical serial killer trying to send a message to Batman and/or Ghost-Maker. But it really takes a turn when Black Mist finds the sword with the Ghost-Maker emblem on it. While I have no doubt that Ghost-Maker isn’t involved in these deaths, it does make the story much more interesting (for the record, I missed the Ghost-Maker emblem on my first read). We will see how things turn out from that standpoint. Ghost-Maker will likely be exonerated, but I don’t think things will end there. And this brings me to what I mentioned about setting the story up.

If you’ve followed us on the TBU Comic Podcast (and you should), one of the things that I have argued would happen since his introduction in James Tynion IV’s run is that Batman and Ghost-Maker are going to come to blows – big blows. It wouldn’t be the first time, as we’ve seen in Batman: The Knight. But I feel we see a final battle soon, and Batman Incorporated will set it up. Ghost-Maker is still the psychopath all claim him to be. And while he is trying, it’s clear in how Brisson is telling the story that Ghost-Maker is intent on doing things his way. Did he truly try to contact Batman once the connection in the murders was made? Now, I don’t believe the battle will begin here. And I certainly know it won’t happen in this arc. But in the end, I see Ghost-Maker reverting back to his old ways. He can’t help himself. And when he does, Batman will return. Until that happens, however, I’m all for seeing Ghost-Maker and El Gaucho have it out over the leadership of the team. I think this is a great dynamic that Brisson is adding to the story.

As someone who has not been the biggest John Timms fan, his art here in Batman Incorporated #1 is exceptionally nice, along with the colors from Rex Lokus. His cover is just ok, however. It’s not bad. But when you put it next to the variants from Derrick Chew and Jorge Molina (my personal favorite), it’s the lackluster of the bunch (and that includes another variant from Jeff Spokes). However, Timms does a good job of complimenting Brisson’s writing with his visual work, and I look forward to seeing more like this (and not Son of Kal-El).

All in all, this is a good start to the series. It's a decent first issue with some impeccable art. You would find it easier to follow by reading Brisson's Batman, Inc. story in the recently released Batman 2022 Annual from a few months ago if you are unfamiliar with past renditions of Batman Incorporated.