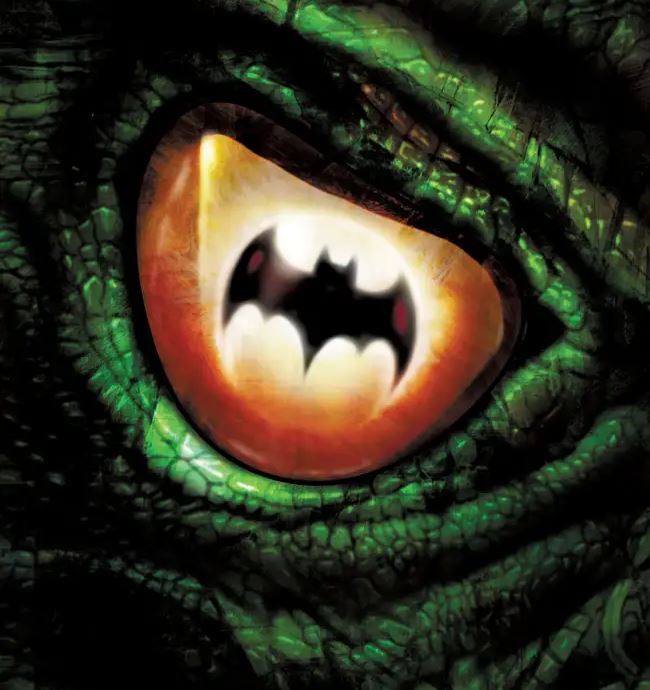 Overview: In Batman: Reptilian, something is hunting Batman’s rogues’ gallery, and it is up to Batman to find the threat.

Editor’s Note: This collected edition includes all six issues of the miniseries Batman: Reptilian, which had its first issue released in June 2021 and the final issue released in November 2021. This review focuses on the story as a whole rather than the individual issues that made up the limited series.

Synopsis (spoilers ahead): Batman: Reptilian begins after a legal defeat; Batman goads a former defendant to attack him on television.  Batman swiftly puts the man down, but this time it is self-defense. In the cave, Alfred chastises Bruce Wayne for his actions. This is before he picks up a 911 call. Scarecrow and Mad Hatter have been found together, and they have been gutted but not killed. Batman goes to investigate.

Batman goes to a local bar to search for Volkov. He leaves a message that he wants to talk to him in an hour. Volkov goes to the meet, but he does not know it is with Batman. Batman is looking for information. Volkov was the number two man in Scarecrow’s gang. Volkov, thinking he is talking about Penguin and Riddler, mentions them, and Batman corrects him. Batman learns that a similar fate fell these two rogues. Batman discovers that after a villain get-together, everything has been screwy. Volkov recounts the meeting where everyone became increasingly aggressive with each other for no apparent reason. Everyone even drew weapons on each other, and just as suddenly as it happened, everyone calmed down. Batman suggests that Volkov should sign up with the Joker’s men.

Batman arrives at the site of the Penguin and Riddler’s attacks. The police have not arrived yet, and Batman uses the time to investigate, finding the Penguin barely holding onto life. He delays the police so that he can question the injured killer. Batman draws some of Penguin’s blood. Back at the cave, Bruce finds estrogen in Penguin’s blood.

Now Batman is hunting Poison Ivy and Mr. Freeze in Batman: Reptilian. He goes into the sewer, hunting the crooks. Batman has the Batmobile ignite flares to illuminate the area. He finds some thugs. The thugs tell him that they are not after Batman, but instead, they are trying to escape whatever is hunting them. He tells them to get in the trunk, and he takes off.  Batman picks up Mr. Freeze’s call for help. Batman finds a slaughterhouse, and he also finds Victor Fries, barely alive.  Freeze’s arms and legs are all broken. Freeze describes the thing that attacked them as a horrific monster with multiple eyes and huge. Batman moves a little farther away from Freeze and finds Ivy. She is too gravely injured, possibly even scalped.  The paramedics arrive on the scene to care for the victims.

Batman still has a mystery. He has discovered the same hormone in all the victims. He asks the computer to locate Dr. Strange, Killer Croc, Deadshot, Tweedle Dum, and Tweedle Dee. He also has Volkov establish the whereabouts of Joker. Alfred reports that all the rogues have been attacked, leaving only Joker and Croc. The hormone Batman has been finding has been found in the blood of the targets and not the collateral damage. He also identifies it as being from a female reptile, a pregnant crocodile. The problem is that those who were attacked did not describe Croc, and the attacks do not match Croc’s style. In addition, the backstory of Killer Croc is still a mystery.

Batman picks up police chatter; the Joker has been spotted. Batman races to the scene. Joker called and left a voicemail; he is holding two dozen people hostage. It is a rant that he thinks the stalker is really Batman turning himself into a monster.  Batman goes in and contacts Volkov, posing as his girlfriend. Batman takes out the henchmen and frees the hostages, leaving the Joker alone. He talks with the clown to try to bring him out, but Joker attacks Batman, fails, and runs into a cave.  Batman follows, talking to Joker over the phone. Joker thinks Batman is closer than he really is. Instead, the monster is with him. Joker is attacked, and Batman brings out the severely injured Joker to the authorities.

This leaves only Croc left. Batman finds Croc eating something. He has been eating homeless people. Batman also finds a rotting sac on Croc, and he cuts it off to discover that Croc has given birth. Batman deduces that Croc unknowingly released a pheromone at the last meeting that caused intense discomfort and rage in humans. This was the reptilian estrogen that Batman has been finding. Croc unintentionally marked everyone at the meeting that his baby was coming.  Croc then retreats to the sewers, where he feels safest and gives birth to a confused, scared, and hungry baby. The pheromone Croc released is supposed to draw the baby to its mother for sustenance. Instead, it draws this baby to the attendees of the meeting, and none of them is its mother. In 1970, a plane goes into the swamps east of Tampa carrying an experimental chemical. The plane disappears, but mutated animals started being born. One animal apparently was Croc. The two hear a sound, and Batman surmises that it is Croc’s child.

Batman realizes that the creature does not want him because he was never marked. It grabs Croc looking for food. Croc, unfortunately, does not know or is unable to feed the baby. The monster then makes a gesture that Batman believes is a call for Croc to mate with it. Batman escapes with an injured Croc, with the creature in pursuit. The creature leaves.  Batman contacts Volkov, who sends a vehicle to pick him up. After an argument, Volkov gets in the car. Batman first tells him it is to protect him but soon admits that he lied; he is using Volkov as bait. The creature pursues Volkov.

Batman and Croc emerge from the sewer to run into birdwatchers who have no idea what is going on. Volkov’s car arrives with the creature in pursuit. Batman’s plan to save the birdwatchers is to be swallowed by the creature, and that is what happens. The car ejects Volkov and explodes, killing the creature. Batman cuts himself out of the burning corpse of the creature. The creature, however, is not dead; Batman could hear its heart still beating. The thing kills and eats Volkov. Batman tasers the creature, and the government arrives to take it and Croc.

Analysis: The art in Batman: Reptilian is fantastic. It is stylized, but each panel looks like it is a painted work of art. The design of Batman is spot on. He is drawn as muscular and powerful. I prefer it when Batman is cleanly shaved, and throughout this story, he is. The villains are highly stylized, especially the Joker; his lips look like they leave his face and curl up like a mustache. Not realistic, but definitely fascinating to look at.

The characterizations of the characters are classic. Throughout the story, Alfred and Batman banter back and forth, but in the end, Alfred is concerned for Bruce as he would be for his son. There are no other members of the Bat-Family featured. The chief complaint I do have is that Batman’s actions lead to the death of Volkov. He intentionally uses the man as bait and then does nothing as Volkov is being eaten.

The story itself is disjointed and hard to follow. The detective work is just tracking the villains. There really is not any real discovery of the plane in Tampa other than Batman’s exposition. It is interesting, but it is just thrown in at the last minute to explain that Croc is a mutation of multiple species. The action is nonexistent until the very end with the final “boss” fight, but other than that, it is slow and difficult to read.

The art is gorgeous and the characterizations are entertaining. The story is just slow.