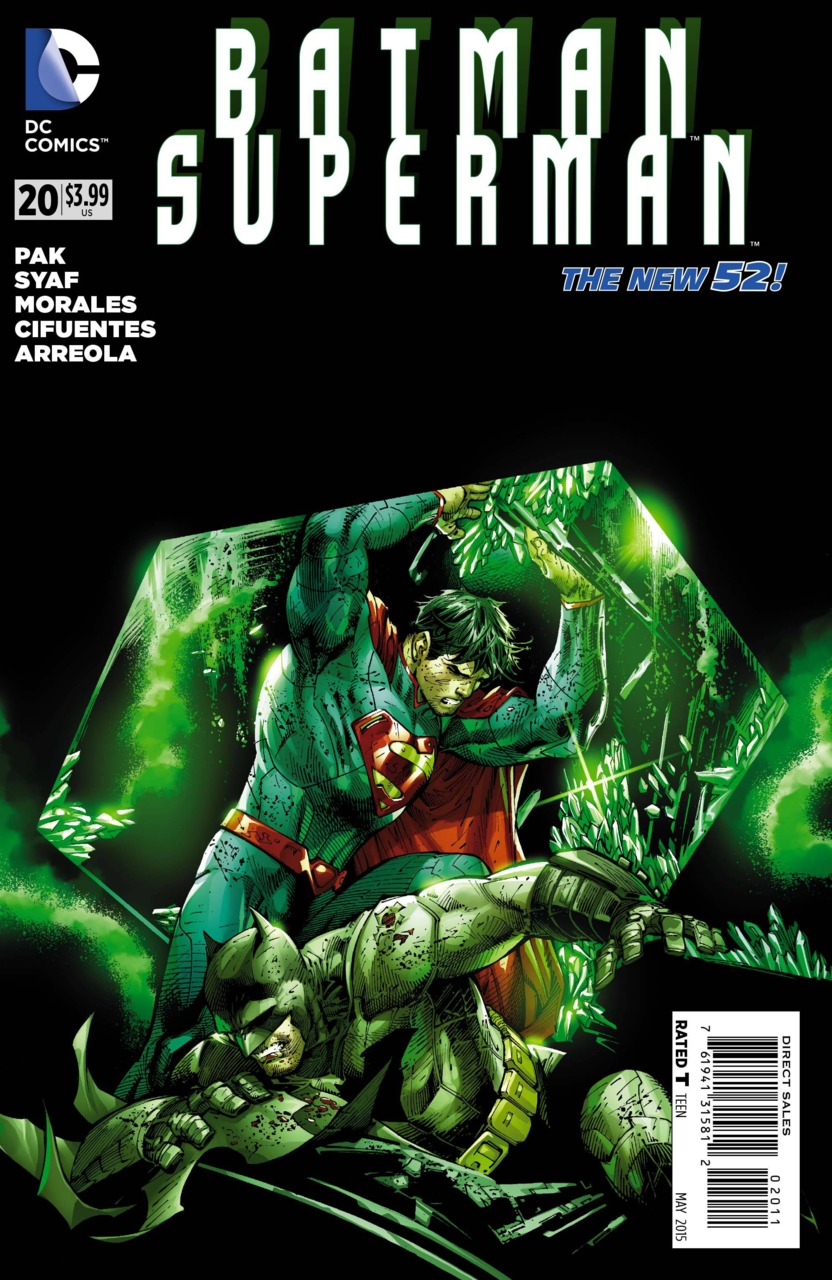 Batman/Superman #20 is an enjoyable conclusion to a story arc that explores several aspects of Superman’s Kriptonian history. Batman, Superman and Supergirl join with S.H.A.D.E. to try to save the Earth from the Kandorian people who have been turned against Superman by the Phantom King.

The book opens with a flashback from the memory of Superman’s Grandmother, which has clearly been influenced by the Phantom King’s propaganda. She recalls first meeting Kal-El as a baby and muses that Kal’s father was responsible for putting herself and the shrunken city-in-a-jar Kandor into suspended animation during which they were conscious and in torment. She blames Kal for keeping her, Kal’s Aunt and the rest of Kandor in this state unnecessarily. She believes it was only when the Phantom King ‘saved’ them from their terrifying experience that they were free to exact vengeance against Superman and Earth.

This sets up a horrifying paradox for Superman: he has finally been reunited with his family but finds that they are his enemies.

As Superman is being attacked by his family we find that S.H.A.D.E., traveling in a microscopic ball bearing, has been summoned by Batman to come to Superman’s aid.

Superman and Supergirl try to reason with their relations but the propaganda of the Phantom King has too strong a hold on them and they use their laser vision to blast away at the super-cousins.

Luckily Batman, who is always prepared, has a staff which generates the power of Krypton’s red sun. This generator weakens the Kryptonians but affects Superman and Supergirl much less because they have acclimated to Earth’s yellow sun. However, Batman appears to get vaporized by a laser vision blast. This is the final straw for Superman and Supergirl as they finally rouse themselves to fight back against their family and ultimately overpower them.

The Phantom King is very pleased with seeing them attack those whom they love and calls the Kandorian horde to the attack. Superman uses the red sun generator as a bomb to take away the Kandorian’s powers. With his army powerless, the Phantom King begins his attack on Superman when the S.H.A.D.E. ball bearings strike Phantom King solidly on the noggin.

Wondrously, Batman reappears and declares that the Phantom King’s tech has been destroyed and he has been sent back to the Phantom Zone. It turns out that Dr. Palmer shrank Batman to the size of an atom just before he was vaporized.

With the Phantom King gone most of the Kryptonians get their minds back. Sadly, Superman’s Grandmother and Aunt still retain their hatred of the House of El and must be placed in a temporary coma until scientists can figure out how to break their madness.

This was a very entertaining book. The conflict that the Phantom King set up for Superman, making him fight his own family, was excruciatingly dastardly and made for a thrilling read. Batman’s ‘death’ wasn’t sold very convincingly so you never really think he is gone for good. Also, the defeat of the Phantom King was kind of sudden though drawn beautifully.

The art in this book was excellent, particularly the page of Batman wielding the Red Sun generator and later, his triumphant ‘return to life’. Many panels have very strong colors and others are more wispy and suggestive but all somehow seem to work as a unified whole.

The standout part of this story, though, is the conflict that the Phantom King sets up for Superman. As mentioned in the book, it is a very Joker-like problem for Superman to solve giving him only very bad choices with which to save the Earth. Superman overcomes his personal qualms about attacking his own family and only through this and the typically ruthless intervention of Batman the Phantom King is overcome.