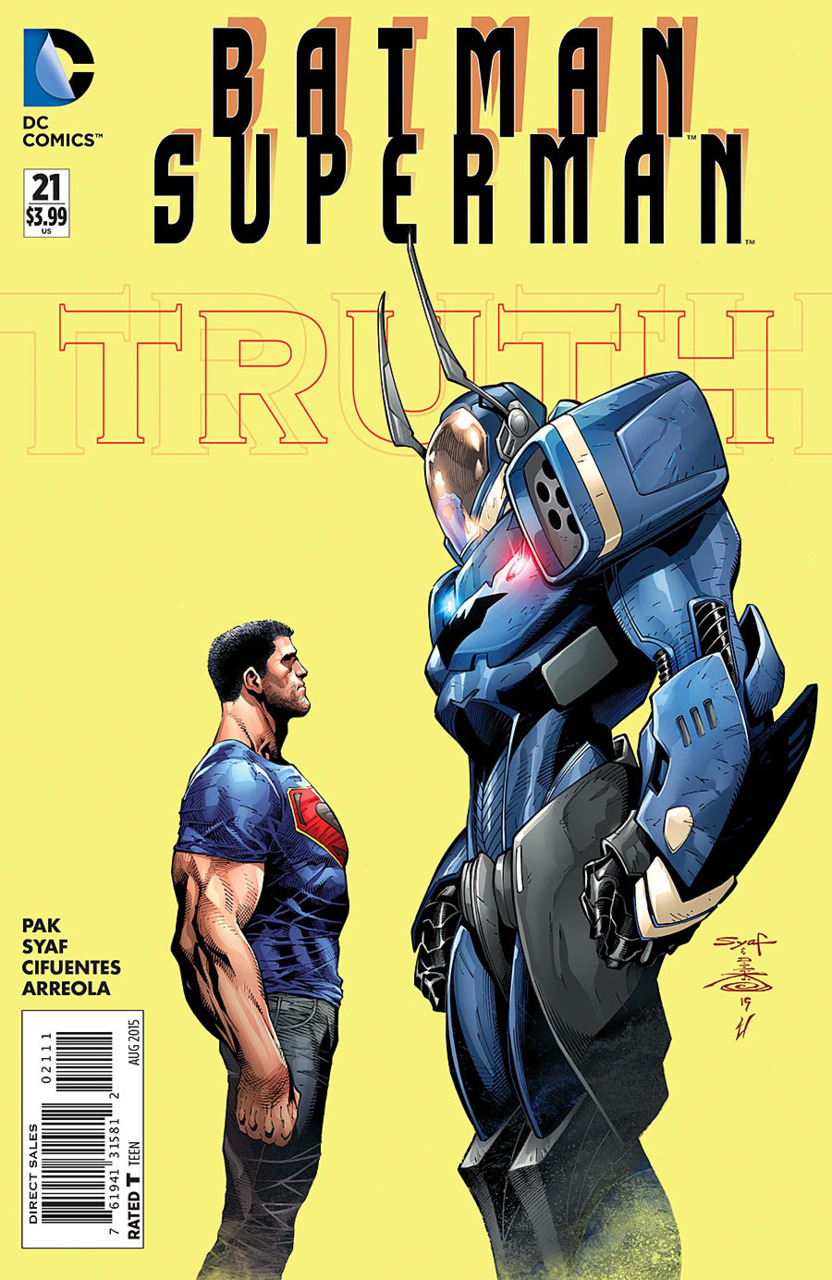 This must be the longest day for Clark Kent after losing his powers due to his Solar Flare powers because even after Action Comics #41 Superman is still struggling to regain his strength while taking on a gang of villains in the streets of Metropolis. I must say not only do we get an awesome fight scene but also amazing thought bubbles from a completely competent Superman when it comes to being able to fight.

After he takes down the gang he is immediately attempted to be apprehended by the police for reasons that are so far unexplained. The police have never tried to arrest Superman before so why are they trying to now? In another badass moment he basically tells them he’s not going to be arrested and he is going to Luthor Corp no matter what.

At Luthor Corp Lex and Clark have a conversation around the origins of just how the exposing of Clark’s identity as Superman was exposed. Clark obviously thinks that Lex is what set the events in motion which of course Lex for a moment doesn’t quite believe Clark is Superman in the first place so Kal-El decides to prove it to him by breaking his desk in half with a karate chop. There are so many just punk rock and badass moments like that in this book it’s amazing. Lex sends Clark to Gotham because the thugs that have been attacking him have been using weapons with a certain energy signature that has an origin from Gotham City. And from the very first moment that doesn’t go well. AT ALL.

Lex immediately tells Bat-Don that Superman is working for him but disappears when Lex is asked for explanations on why he was breaking into the WayneTech Building. Lex tells Bat-Don about why he is in Gotham and realizes that Superman took the evidence.

Superman heads to the most obvious next location in being the Batcave. Superman makes a comment about how Bruce has allowed Wayne Manor to become Arkham but he knows the cave is still highly functional. As he heads into the cave we see that it is very much in disarray and that Alfred has all but given up on his job in keeping things clean. Since Superman has lost his powers he can’t hear Bruce’s heartbeat but he can most definitely tell that Alfred is grieving and Alfred tells Clark what happened. This part is kind of confusing to me as Superman was part of the Endgame arc and was cured of the disease that Joker inflicted upon him. You would have thought that by now he would know that Bruce is presumed dead. So with that fact Superman doesn’t completely believe Alfred simply because he knows that before he was a butler he was a trained actor.

Using the tech and equipment in the cave Clark takes one of the Bat-bikes and colors it with blue and red and shoots off some flares in not only in memory of Bruce but to get Bat-Don’s attention and the issue ends as we are headed for a showdown in issue #22.

Such a fun issue, I am really liking this whole Truth arc and am actually going to read the entire run of it because it is so topical with what is going on with the attitude towards Man Of Steel. The fact that everyone knows Clark Kent is Superman is the best way that DC can make Superman DC’s Captain America again. It’s time to make this character relevant. No more secret identities.