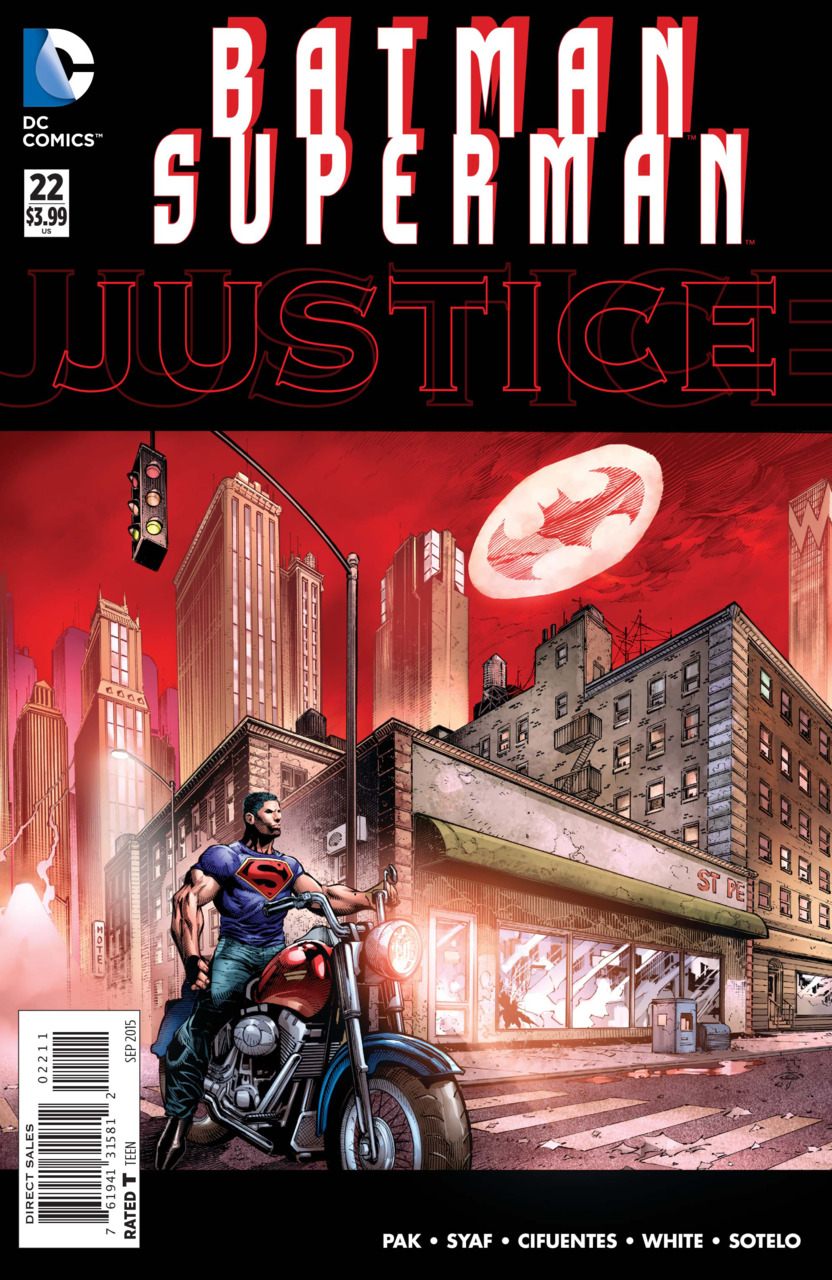 Batman/Superman #22 is truly unique. It has somehow found a way to makes Batman and Superman sound like whiney children when they bark at one another in this issue. Let’s go for a rundown.

Spinning out of the last issue we get Clark Kent vs The Bat-Don Part II, de-powered Superman is proclaiming to “The All-New Batman” that he is a liar as the latter and the the Bat-Don is throwing it right back at him. Again I find it incredibly hard to believe that this version of Gordon isn’t the least bit aware that Superman for all intensive purposes should be an ally but I digress. This story needs all the force it can get because right now I don’t know what it is that we are seeing.

Superman finally decides to stop the fight and remind Batman that if they don’t work together that people will die. After a kind of funny scene in the helicopter they are taking they find out that the next disturbance could only be coming from underground as the surface and the sky are clear of any impending threat against them. The entity that has been attacking has finally gotten a name thanks to Lucius Fox in the form of Dawn Command.  Lucius shows the Bat-D0n and Clark Kent what they have been working on at the waterfront. It turns out that a tiny sun was accidentally birthed by a scientist at Wayne Tech with unauthorized S.T.A.R. Labs technology. There is an immediate fear of whatever it is underground or underwater coming up and detonating the Mini Sun setting off a chain reaction that could wipe Gotham completely off the map.

CK then throws a wrench at Batman which he does not catch and after calling the Bat-Don slow he races out to take on whatever is attacking until Batman stops him. Then with the wrench we find out what is truly out there in Ukur, The Beastlord of Subterranea. Superman tries to get into his head and show him what a mistake he could be making that could possibly kill not only all of his people but the ones on Earth as well.  The Bat-Don thinking that Superman is only trying to distract him takes his own cane and stabs him in the back with it. Clark Kent and the Bat-Don again trade barbed words. Superman decides he is going to continue to try to make peace with Urku and falls into the hole right after the two just called each other “Not Superman” and “Not Batman”. The hole closes with Bat-Don and Lucius over head not knowing quite what to do  next.

So…okay. Greg Pak has done an amazing job on this title up until now. I went with whatever he was trying to spin in the last issue because it literally was a shell shock for both characters not knowing who they could trust and apparently a Superman unmasked now of course means a Superman UNWANTED and a Superman suspected. But I don’t get it. Is he trying to make it as if the only team that could possibly work together is Bruce and Clark? If so, I get it then. But it’s unneeded. Batman and Superman should always be friends no matter who is under the cowl. That is until they have a good enough reason not to be. I guess there has to be tension and nonsense in this book somewhere because without it there isn’t any at all. Also Bat-Don being incredibly trigger happy and stab happy is just weird. Bat-Don STABBED an under dweller. Now tell me that’s not weird.