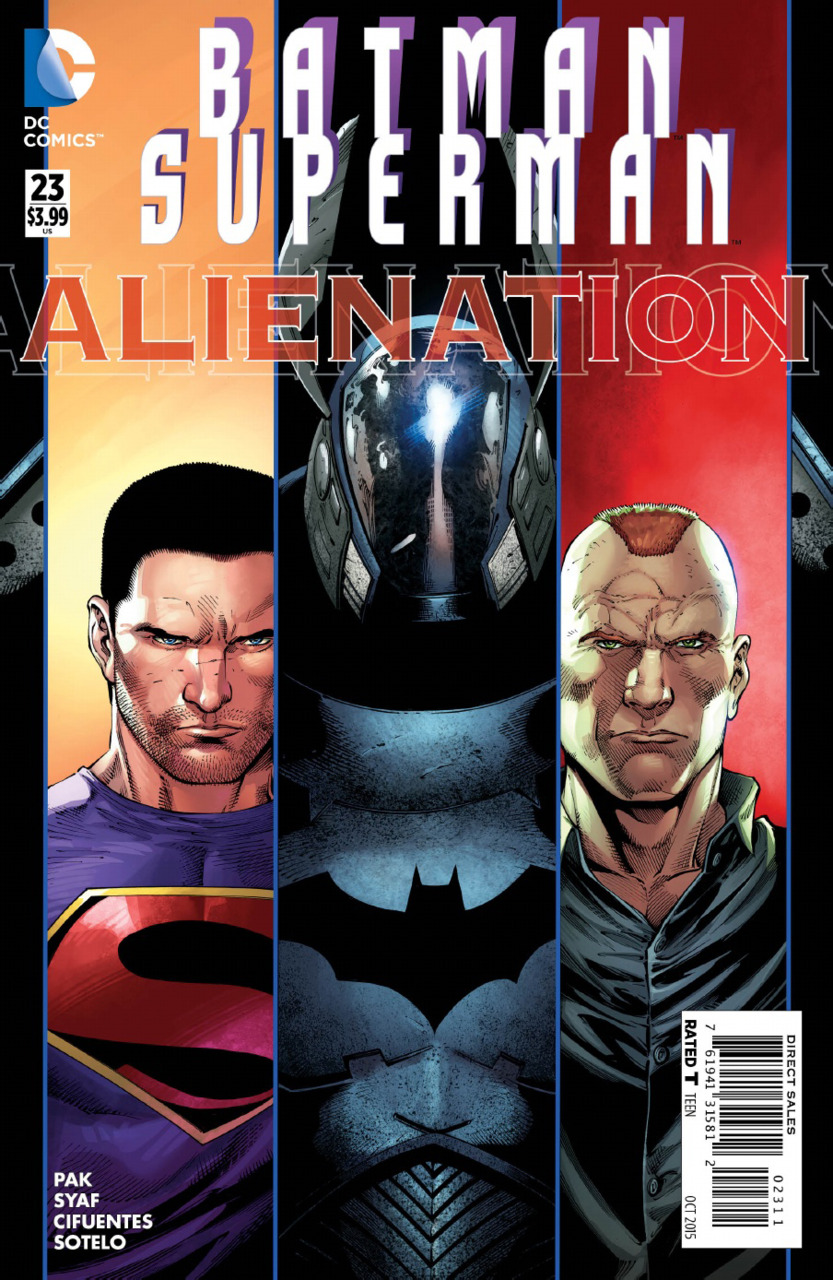 The issue begins exactly where issue #22 left off with Superman hitching a ride on a giant creature into the Earth. Superman is attempting to catch up with Lord Ukur of Subterranea who fled underground after a confrontation with Batman and Superman at a Wayne Enterprises research facility. Ukur had attempted to steal a man-made sun created by Wayne Enterprises. Superman and Batman argue over the radio about whether Batman should join him underground.

Clark accuses Gordon of starting a war by attacking Ukur while Clark was trying to talk him down.  The two argue for about two pages of this issue, then we see Batman asking Lucius Fox whether he should trust Kent. Fox admits that it may have been, in fact, their fault for the situation.

We return to Superman sneaking into the tunnels around Ukur’s camp.  Superman’s inner dialogue continues his feelings about being depowered. He knows he could reach out to his more powerful allies but he believes this is still a job for Superman. Clark knows he can’t approach this like other cases so he must approach it another way. He decides to infiltrate Ukur’s forces in disguise and cracks a joke about acting as Bruce would in a situation like this.

Clark finds himself in a stampede of horse-like creatures and discovers inmates from Gotham Prison have been living underground for some time. A mother of a boy that Clark saves during the stampede tells Clark how they came to be down there and tells him that they have joined Ukur’s forces. She introduces herself as Angie and that she is in charge of the stables. Superman offers to help out in any way and is captured shortly thereafter by Ukur’s men.

We see Gordon in Metropolis investigating Clark Kent and finding out whether he can trust him or not. He questions Mr. White who feels that Kent put a lot of people at the Daily Planet in danger and that Kent should not be trusted. After leaving, Gordon is tailed by Lois Lane who wants more information on Superman. Gordon brings up his dilemma about whether he should trust Kent or not. Lois tells Gordon that he should trust that Clark is always putting everyone’s interests ahead of his own.

Back in Suberranea, Superman is being tortured because the troops believe he is a deserter. They then suit him back up in armor stating that they will most likely need him in the war to come. Superman opens up radio contact with Batman to allow him to listen to Ukur’s declaration of war.

Superman begins to tell Batman that they should try to reach out to Ukur which Gordon interprets as Superman contemplating aiding in Ukur’s cause. Gordon states that he will not let Ukur get a hold of the sun and that he would need a “navy” to get it anyways since they took it out to sea. The last panel reveals that Aquaman has allied himself with Ukur in the coming war.

I will admit I was a little disappointed with how this issue developed character-wise. That being said, this issue still had some strong points to it.

Starting with the positives, I do really like the art on this issue. The art team of Syaf, Cifuentes, and Sotelo really captures action well in each panel but I especially like the lighting they use both in the scenes of Gotham and Metropolis as well as the underground tunnels beneath Gotham. It makes the scenes contrast well when telling the different journeys each hero is on and where they are in the story.

My biggest complaint of this whole arc so far has been the characterization of Gordon.  I have been relatively on board with Gordon being in the batsuit as a fun twist, but they are making him pretty arrogant as well as ignorant with his many missteps and lack of impulse control.  I am irritated with Gordon’s constant questioning on whether he should trust Superman. That’s right…he’s not sure if he should trust SUPERMAN (the guy who stands for truth, justice, and the American way). I know Clark’s been revealed as an illegal alien but I just can’t see Jim Gordon being so harsh on Clark but pretty much fine with working alongside Batman back in the day. It is too much of a departure from the Gordon that we have come to know and respect.

As for Superman’s characterization, writer Greg Pak has done a good job of making Superman into more of a rogue now and less of a boy scout. I think it is an interesting new look for Superman.

Like I said, I enjoyed this issue for the most part and the cliffhanger certainly left me curious to see what will happen next. Although Gordon seems a little out of character and all the arguing between Batman and Superman gets a little old, it is a unique story with good art and I am on board for what comes next.