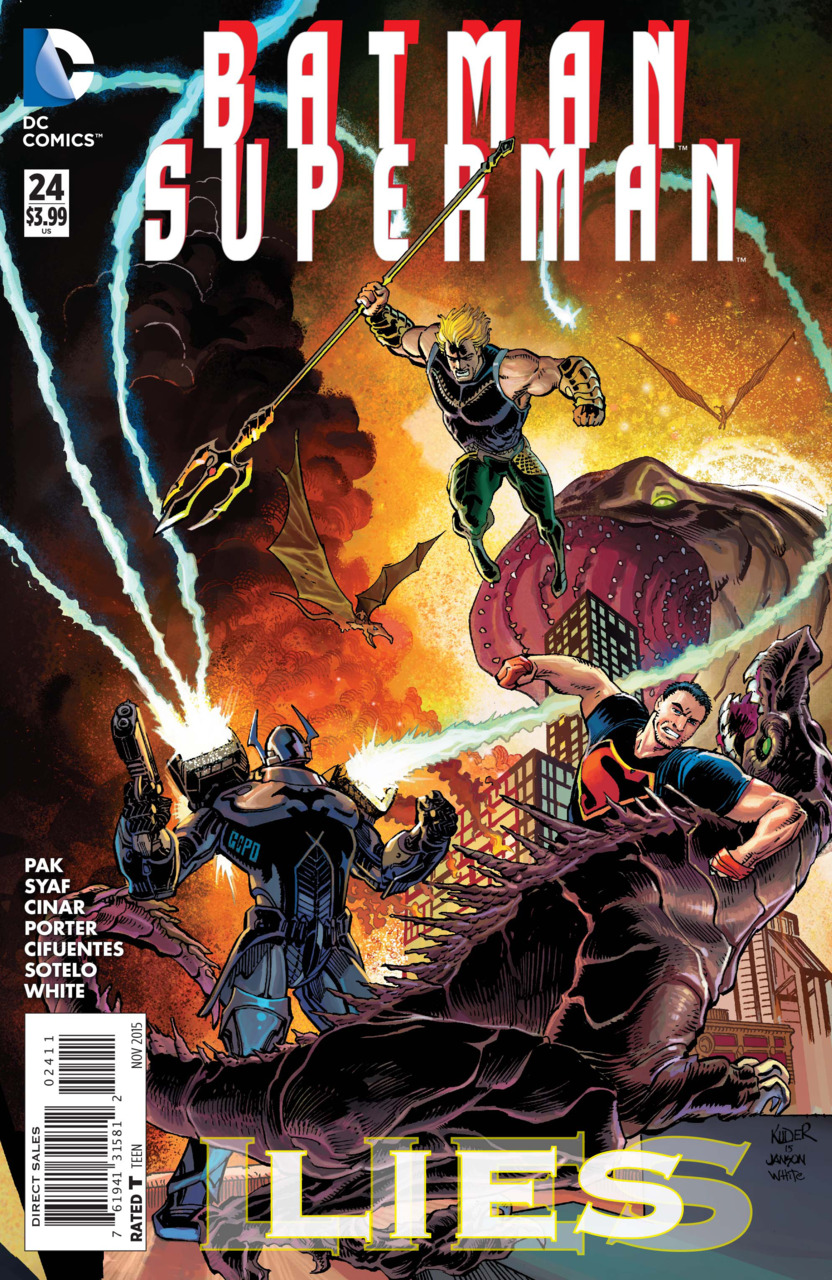 The issue begins with Superman fighting Aquaman, who we saw in the previous issue as being allied with Ukur. The next panel takes us ten minutes earlier to Batman working with Lucius Fox to stabilize the man-made sun before it explodes. While they are attempting to do that, Superman, still in disguise as Aksel in Ukur’s Army, makes his way up to the front to reason with Aquaman.

Aquaman, furious after seeing the bodies of dead dolphins killed by the artificial sun, strikes him down. Superman gets unmasked and Ukur arrives to destroy him. Aquaman tells Ukur to deal with the WayneTech sun while he deals with Superman.

Aquaman tries getting Clark to take a fall since he is depowered. Batman agrees with Aquaman and takes on Ukur’s army himself. Clark gets Aquaman to knock him to the oil rig where the army is headed.

Clark lands and saves Ukur from an energy spike from the artificial sun. It is clear the sun has become increasingly unstable and will explode. With the remote guidance system non-operational, Batman decides to fly the sun manually into the atmosphere.

After Batman launches into the sky with the sun, Superman leaps onto the rocket carrying the sun. Batman tells Superman to get off as he is trying to steer the sun far enough away from everyone.

While in mid-flight, a ship appears and attaches cables to the artificial sun. Batman and Superman fall as the ship rips the sun away from the rocket. Ukur addresses the ship as part of Dawn Command. A holographic figure appears and thanks Ukur for the “distraction” then all of Dawn Command teleports away.

The underground citizens from Gotham that were allied with Ukur are shocked at seeing the sun they needed taken away. Lucius Fox offers to help them. Ukur begins to argue but Aquaman stops and reasons with him.

In the wreckage of the crashed rocket, Gordon tells Clark that he’s too impulsive and to stay out of Gotham.

In the epilogue, Clark goes to a park in Gotham city to talk with the new Bruce Wayne. Bruce’s way of helping children (and society in a way) is much more different from the first time Bruce and Clark had met in that park.

In the final scene, it is revealed that Vandal Savage was behind the stealing of the sun and it is part of his plan to take over the world.

The finale to this arc was what I expected in that it gave us a lot of action and wrapped up this Subterranea storyline. The best part of this issue was at the end with the interaction between the Bruce and Clark. The scene harkened back to the beginning of the first issue since the re-launch where Bruce and Clark observe a fight between two kids in a park. In the first issue, writer Pak described the two heroes’ mentalities towards helping others with how they chose to intervene in the fight. Now with an “all new” Bruce, we get to see the two men in a similar scenario and Clark gets to see how the new Bruce thinks.

The weakest part of this issue was, again, the characterization of Gordon and the relationship between him and Clark. I stated in a previous review how I did not like Gordon’s portrayal within this series. It is true that Batman is usually pretty arrogant in some way but Gordon takes it a little far with phrases like “I’m Batman” and “Of course I did” in response to whether he had a plan. I believe Gordon would have more humility if in the bat-suit.

In regards to the heroes’ relationship, there really was no change by the end of the arc. We end up where we began in this arc with Gordon ordering Clark to stay out of Gotham and seeing him as a threat. He ends their partnership just when it became more necessary following the theft of the artificial sun.

Although not a “weakness” of the issue, I wished they could have gotten Jae Lee to come back to illustrate the epilogue. Because this scene was pulling from the first issue that Lee illustrated, it would have been a nice touch in connecting the way Bruce and Clark started off and how they are starting off fresh again now since his “death”. Overall, the art team has been great in giving us bright and colorful pages to complement the fantastical elements (Subterranea, Atlantean beasts, etc.) of the story.

Despite the weak character development, this was a fun story arc and this issue did a nice job at concluding the Subterranea storyline. The highlight for me was the epilogue scene between Bruce and Clark. This issue also set up the next arc’s villain as Vandal Savage, which should be interesting, and I look forward to seeing his interaction with Batman and Superman.