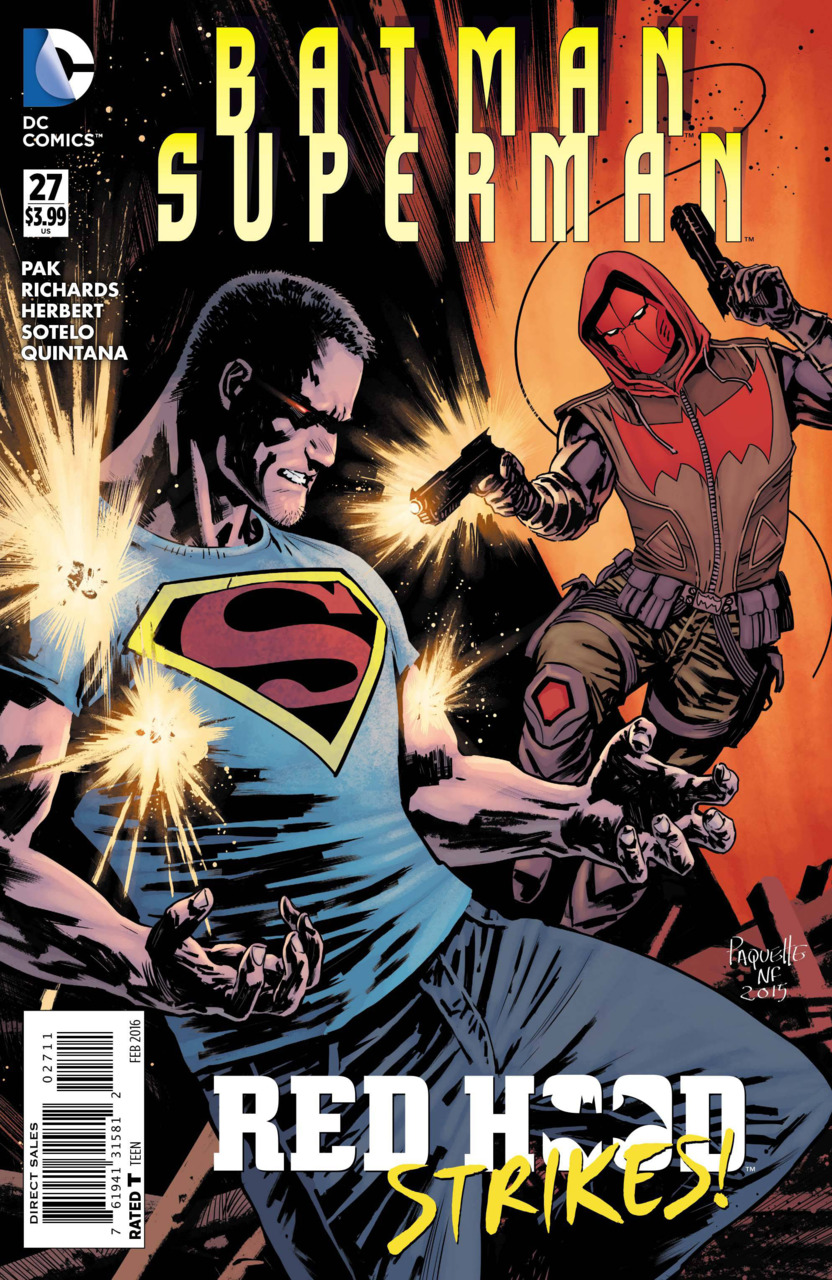 We pick up with Jim Gordon who is currently Batman recalling a previous time the Supremacists attacked Gotham. We seem him when he was a detective in shock, observing Superman destroying the “death machine” that could’ve killed millions while turning his back on Jimmy Olsen, Superman’s best friend, who was falling from a building to his inevitable death.

Thankfully for Jimmy, Batman swung in just in time to snatch him from the sky and bring him into safety. Olsen was never afraid; he had complete trust that he would not die.

Jim contrasts that trust that Jimmy had in Superman and Batman with the lack of trust his current team has in each other, in particular Gordon with Superman and visa versa.

Picking up at the Russian Nuclear Decommissioning Site in Siberia, we pick up with Superman literally giving a recap of the previous issue; how subtle.

Batgirl discovers that the Nazi starship they discovered at the end of the previous issue is actually also a giant gun. Vandal Savage is using the men working at that camp and the uranium they harvest, not simply to power a ship but also a gun. Red Hood suggests blowing it up but Grayson quickly points out that Savage would no doubt realize the gun being blown up and immediately teleport there to kill them. With Superman not having his powers and the other four being mere men and a women, they wouldn’t stand but a few minutes against Vandal Savage.

Superman tells the team they need to 1) save the lives of the civilians, 2) disable the gun, and 3) capture Savage and discover what it is he’s been plotting. Batman quickly asserts a fourth objective: “Don’t get your team killed.”

Gordon’s goal angers Superman because it reveals his Jim’s lack of trust that he has in Superman and the team. Clark reminisces on the day he defeated the Supremacists while Batman saved Jimmy Olsen. He observes that although Bruce was only human, “he didn’t know it,” which gave him an advantage to accomplish anything.

After a sly remark, Superman confronts Batman, calling everyone to trust each other. Jim agrees just as they are about to execute their plan against Vandal Savage.

At Valkyrie, the Headquarters of Savage, Superman and Batman teleport there to battle Savage. After taking a beating, the two teleport back to Siberia. Just before they leave, Batman threw a grenade destroying that portal back.

Six hours later, Savage arrives in Siberia to obtain the uranium from his captives. As Vandal is inspecting all of their work, Superman and Batman arrive. Vandal attempts to engage the newly-powered guns of his ship. Something goes wrong. While the ship begins to take off into the sky, Superman tells Vandal over the intercom that Batgirl rewired the ship to engage the engine instead of the the guns.

This sends Vandal into space. Just as he hits space, Savage tries to leave open the ship prompting an explosion. The group wonders whether he died or he teleported out of the ship in time.

The issue concludes with Superman narrating over two pages of flashbacks, resolving that what matters most between Batman and Superman is that they never give up on each other.

This issue which was titled “Trust” covered just that. It was interesting to see Jim Gordon and somewhat powerless-Superman wrestle with trusting one another and, in the end, starting their new relationship off well. I thought Grayson and Red Hood were almost a waste to have in this issue, especially with the cover proclaiming, “Redhood Strikes!” I enjoyed the flashbacks especially because, at this moment in DC Comics, I’m growing a little tired of Bruce Wayne not being Batman. This book also makes me wonder where this falls in line with the rest of the Batman Universe.

I still find the art to be a little rough. There wasn’t as many oddly-drawn characters as last issue. I still do think they’re drawing Batgirl a lot bigger than she is in any other book which is fine. However, it can just look weird. Also, I enjoyed how some of the flashback panels captured previous generation’s art styles.