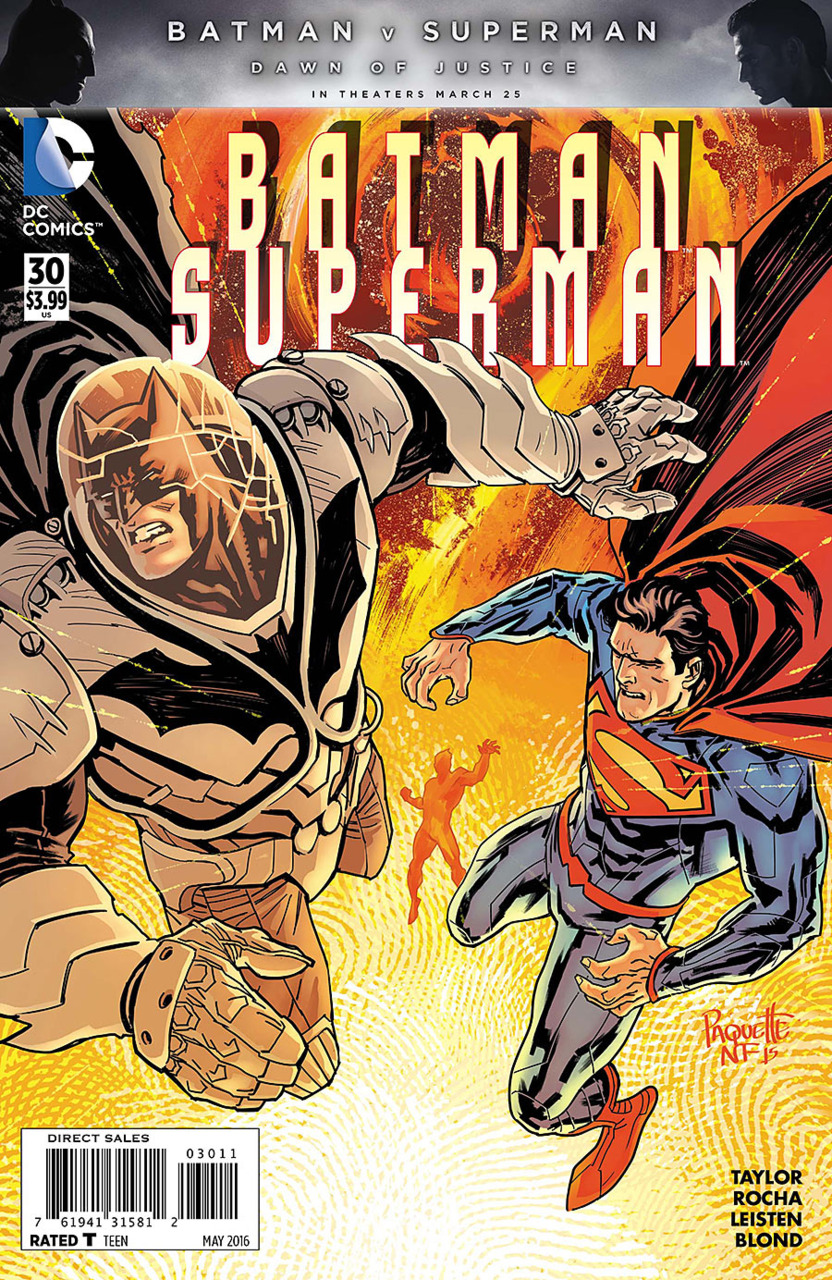 Synopsis: We pick up directly where #29 ended: Batman in deep space flying Lobo’s ship which he recently “acquired.” He attempts to contact Superman through his ear piece but we quickly find Superman enchained by the previous enslaved Kryptonian (or so we thought), his ear piece lying on the floor and out of reach.

While talking with the man, Superman learns that he wasn’t from Krypton but visited there when he was a child, noting he “would like to return one day.” In hearing this statement, Kal-El realizes this man has been enchained for a long time especially because the man mentions that he’s not sure how long he’s been imprisoned due to the sun never going down. He inquires why they asked him to enslave Superman. The man doesn’t know. Hearing this, Superman fears the worst. He has the man use his x-ray vision to look at himself only to find that he is dying. All along, he thought he was being freed; instead, he discovers he’s being replaced. He responds angrily by igniting an electrical explosion.

At the space station, the giant lizard alien tells Lobo he needs him to capture Batman if he wants to get paid. Not knowing the lizard father was financing the mission, Lobo is surprised. He radios Batman, informing him that there’s a tracker on his ship and that he will find him.

Furious, Batman immediately contacts the Hal Jordan Green Lantern. After quickly shocking Hal that he was able to reverse-engineer some of the communication mechanisms on his ring, Batman shocks Green Lantern even more so by requesting help.

Back where Superman was enchained, the man helps him escape as well as helps him recharge his powers by taking him close to the sun. He contacts Batman and Batman informs him his plan, beginning with, “I have to die.” Troubled, Superman inquires about more details.

Some time later, Lobo lands on his ship that’s currently being piloted by Batman. After breaking into his ship and searching for Batman, Lobo is attacked by Batman. He quickly takes down Batman, exposes him to space to kill him, and brings him back into his ship in chains and “dead.” Lobo drags Batman to the feet of the giant lizard father, giving him his final request.

Batman stands up and demands to know why the father had his daughter killed. After finding out the answer, Lobo attacks Batman but is quickly overwhelmed by Batman’s power. After he takes Lobo and flies him deep into space and throws him, we discover that the real Batman’s plan was for Superman to take his place and defeat Lobo and the giant lizard. Superman returns to ship all while contacting the Green Lantern Corps, asking if they hear the father’s confession. They affirm and are on their way to arrest the lizard. While waiting for the Corps, the lizard attempts to step on Superman but, while standing still, Superman pokes through the foot of the lizard.

The issue concludes later on Earth with Batman, Superman, and the now free man watching the sunset.

Art: Last issue was the best art I’ve seen on an issue in along time. Although this issue’s art isn’t on the same astounding level, Rocha’s pencils partnered with Leisten’s inks and Blonds colors are still incredible. Similar to last issue, Superman was portrayed with a few wonderful shots. The detail on both Batman and Lobo is also worthy of recognition. Perhaps the main difference in this issue from the last is the replacement of Júlio Ferreira’s with Jay Leisten. Regardless, still a phenomenal composition by the art team.

Final Thoughts: I absolutely love this arc. Of the many DC books I read, this arc is probably one of the more exciting books for me to read at the moment along with Batman/Teenage Mutant Ninja Turtles. My only hesitancy in rating this issue higher than a four is it did seem a little rushed for a finale. Overall, the arc felt short. I doubt that Tom Taylor couldn’t have stretched this storyline into two or three more issues. At the same time, I also understand that many of DC’s writers are wrapping up their current books while most likely getting a jump on the Rebirth title/s they may be on so it makes sense. With all that being said, I consider that flaw to be far outnumbered by the exciting arc, fun dialogue and gorgeous art.