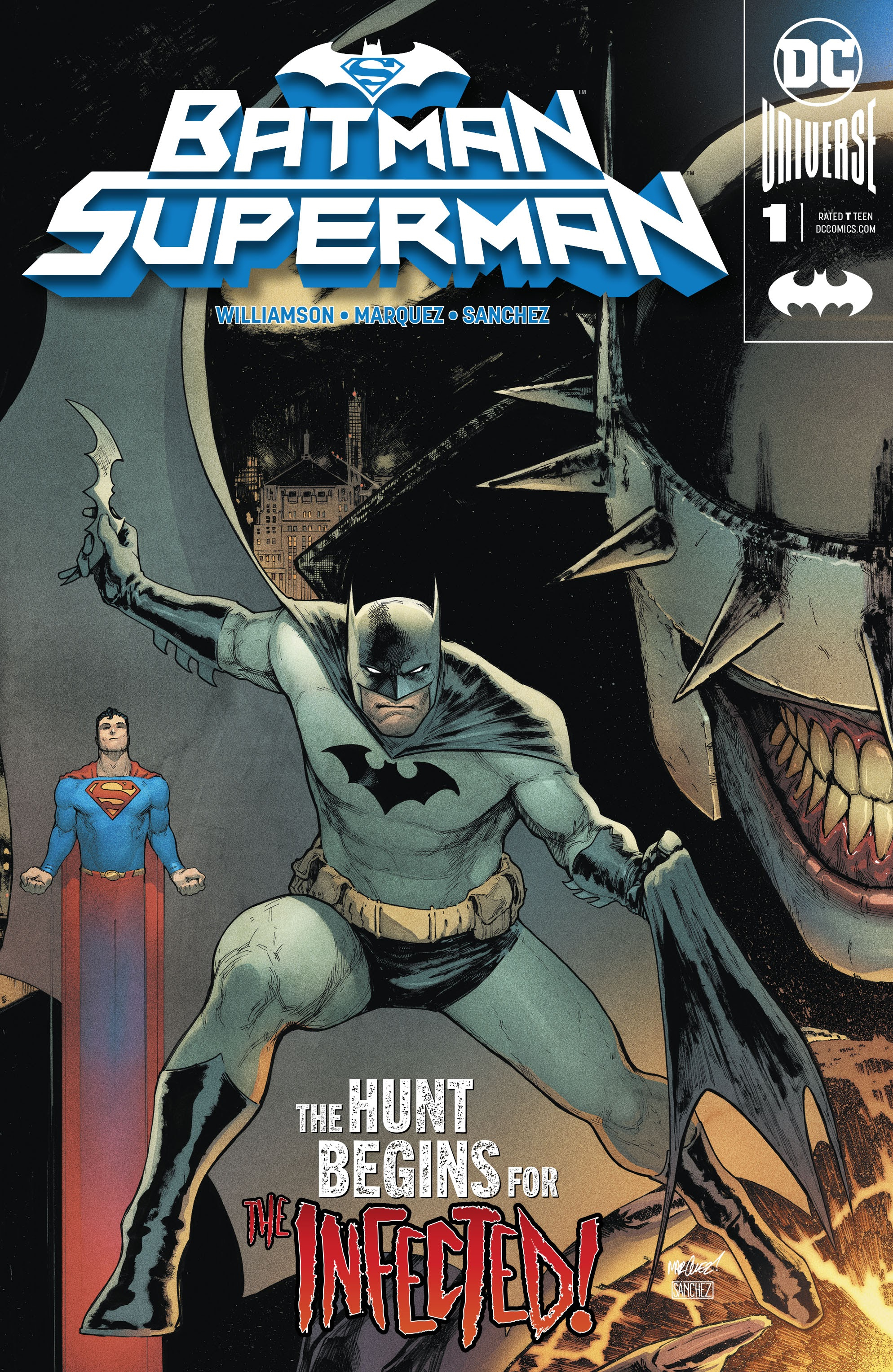 Overview: Batman and Superman team up to rescue a kidnapped boy.

Synopsis (spoilers ahead): There is a buzz in the newsroom. Everyone pesters Jimmy Olson about his cover photo where he was able to take a photo Batman. Jimmy responds saying he had a friend who helped him, and Clark just smiles. Batman radios Clark that there is a situation at the Watchtower and he is needed immediately.

Superman flies into the Watchtower and sees his teammates bloody bodies strewn on the ground. Superman begins to cough up blood due to the air being filled with a Kryptonite-infused gas. Batman tells him he was dead the moment he walked onto the satellite. He had always wondered what was the worst version of the Man of Steel. Would they be an impossible team? Would anyone be able to stop them from killing the multiverse? Unfortunately, he knows their story always ends with them fighting to the death. So, he decided to plan ahead. The Batman Who Laughs killed all his rivals and watched his world burn.

Over on Earth-0, Batman shares the Batman Who Laughs tried to change him, but he was able to stop him. However, the serum he created could still be out there. Being the only other person on the roof, Gordon says he does not need the recap on the story; he was there to live it. Batman says he was not talking to him. Superman flies in with a bus and Killer Croc. After disposing of the both of them, Gordon shares a boy was kidnapped and the only witness to it said the suspect was Superman. This Superman was supposedly laughing. Batman says in order to find this boy, both he and Superman need to find the Batman Who Laughs’ base of operations.

Both leave to go find this base, and Batman asks if Superman has a plan to stop him if he went rogue. Superman dismisses this question because he doesn’t like to think like that.

They arrived at Crime Alley – the home of the Batman Who Laughs. They find their way inside the base, and they disarm the sentries protecting the place. After looking around, they found six Batarang molds. These molds have traces of the serum the Batman Who Laughs tried to infect Gotham with. Suddenly, a hologram of the world’s heroes appears and all of them are given smiles. Batman and Superman realize this is bigger than Gotham. Their allies could be infected. They have no idea who to trust going forward.

A boy dressed as one of the Batman Who Laughs’ Robins attacked Batman. He says he was taken from his family and hit with a Batarang. They changed him and made him wear this costume. The boy says he was happy they set him free. This boy asks if they recognize him. They should of course, because he is Billy Batson. And now, he is the Shazam Who Laughs.

Analysis: I think The Batman Who Laughs series is Scott Snyder’s best work. I loved the themes and messages he played with. I also loved Jock’s art. So, Batman/Superman has big shoes to fill in my opinion, and I believe Joshua Williamson and David Marquez delivered.

I was genuinely worried about this title. There is talk on the TBU Discord discussing villain fatigue, especially the Batman Who Laughs. And, I get that. I do. The Batman Who Laughs is a unique villain and the potential story ideas are endless. It makes sense why writers want to use him. But, the villain still does not feel old. Writers keep adapting him and making him more complex. Instead of infecting a city, he has turned the world’s heroes against themselves. Who can they trust? It is a brilliant strategy and I hope Williamson delivers.

When I first saw concept art for this series, I was genuinely unimpressed. After the great work by Jock, I felt Marquez’s work would hinder this story. I was (thankfully) wrong. This issue is drawn very well. My only criticism is how he draws people. Superman’s neck is obscenely huge. Batman cowl is too rounded. Body proportions are off at times. But all in all, I am on the David Marquez train now.

Final Thoughts: Everyone always wants a Batman vs Superman fight. But, I have always wanted to know if Shazam could beat Superman. We will get that fight next issue: Superman vs the Shazam Who Laughs.