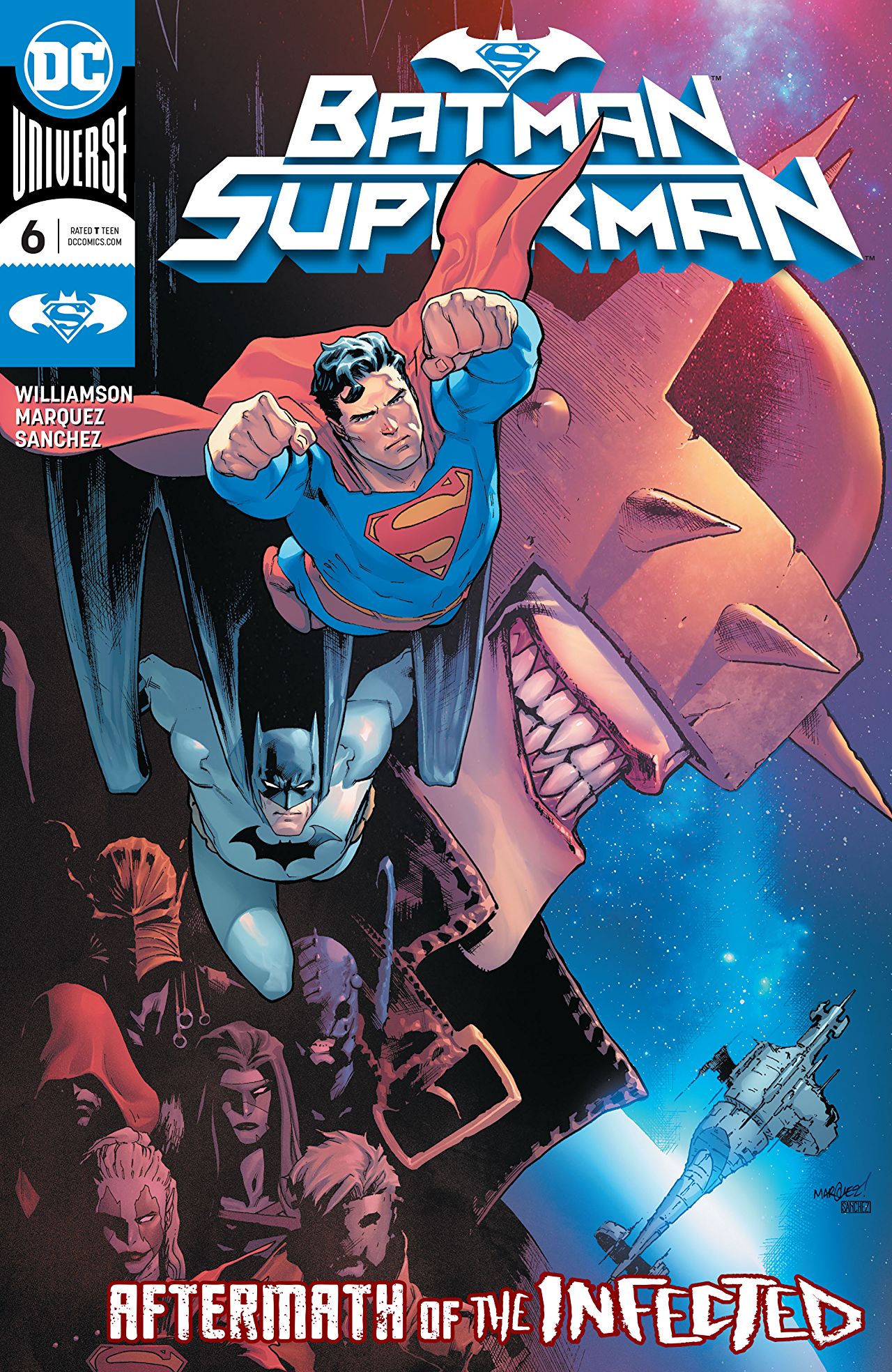 Overview: Batman and Superman find their resolve in the fight against the infected.

Synopsis (spoilers ahead): Infected James Gordon gives a speech to Batman and Superman about how each and every time an officer under his command was killed in the line of duty, he had to lie to the next of kin. They did not die bravely; they died scared. Both he and the officer’s family took comfort in the lie. It made it easier to move on from the pain. With that story as the background, Gordon asks Batman and Superman who have they lied to recently.

Independently, both Batman and Superman realized they needed to talk to the third member of the Trinity – Wonder Woman. They search all over the globe for her, and they find her on the island of Aeaea training against rock-like creatures. They tell her they need to talk to her, and she scolds them for withholding information. She knows about Donna Troy and how she was infected by the Batman Who Laughs. Everyone at the Hall of Justice is talking about Batman and Superman’s decision to withhold the truth from the heroes.

Her lasso, the Golden Perfect, was handed to the Amazons from the gods. Whoever touched it was forced to reveal the truth. She never once thought she would need to use it on Batman and Superman. They used to not keep secrets from each other. They used to fight as a cohesive unit. Not anymore.

Superman and Batman both leave to go home to their respective cities. They realize she was right. Their old methods would not work. It was time that the Justice League fights like a team. They once thought they needed to fight the infected by keeping the cards close to their vest. However, this was the primary reason the infected were victorious. If their enemies were going to work together, then the heroes need to fight together.

Bruce and Clark meet at the site of the Batman Who Laughs’ Batcave. Bruce says he is going to rebuild the monster’s lair into something beautiful. Bruce says he has a plan. He says he built a device that uses data from the lair. This data is what the Batman Who Laughs used to do research on who the easiest targets for infection would be. Being transparent about their investigation to each other is the only way to illuminate this conspiracy.

Batman and Superman go to Gordon again and tell him that they will find a cure. This infection has only caused the heroes to grow together. They are not afraid of what is to come. Gordon just laughs at their newfound moral stance. Morality will not stop what is coming.

Analysis: This has been by far my favorite issue in this series. I love how Joshua Williamson wrote Bruce and Clark. I liked how they were able to take something from their last battle and grow from it. Often, heroes have setbacks and it seems they never do a post-mortem on what failed.

I truly believe this is the most complete issue in terms of art in the series. David Marquez killed it. Each page and panel were beautifully done. Alejandro Sanchez and John J. Hill complemented Marquez’s work well as colorist and letterer respectively.

What a teaser at the end! General Zod vs Ra’s al Ghul – I never thought about them fighting each other, but I sure want to see it now!

Final Thoughts: This was a good conclusion to the infected arc. I definitely want Williamson to come back to this plot, but I am ready for a new story. It will be nice to decompress from all the Dark Multiverse stuff for a bit.