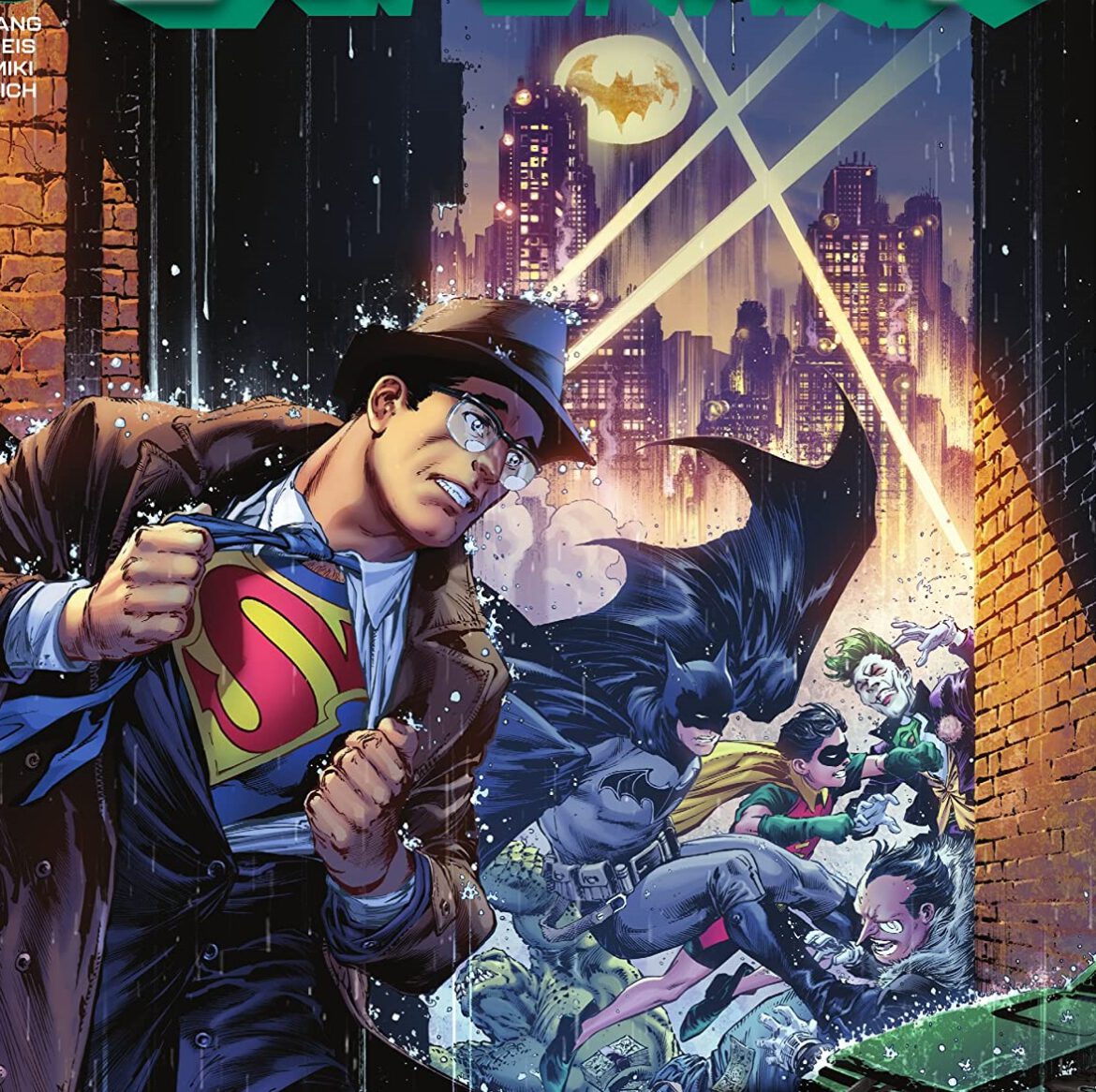 Overview: In Batman/Superman #17, Batman and Superman confront Auteur.io, the director of the “Archive of Worlds” in a clash of different worlds.

Synopsis (spoilers ahead): Batman/Superman #17 kicks off where it left off at the end of the last issue. As the robotic figures take hold of Superman in the Thermosphere, both Batman and Superman begin to punch their way out of the situation. As they take out one robot after another, a large robotic figure with an oval-shaped head remarks that the two entered a mysterious “Archive of Worlds,” referring himself to the Auteur.io, the Visionary Director of the Archives. As Superman and Batman punch him into submission, the film session starts with Batman, Lois Lane, and Robin searching for the Spider Lady. Lois then snarkily remarks that she was not fond of Batman’s ears as a Halloween costume.

Up in the sky, Superman appears, confused as to why the Batplane was shooting him down. Lois remarks that Superman was a friend. Batman listens and brings her and Clark into the Batcave. Robin tries to hide the fact that he is a kid from Lois, but she does see a trigonometry textbook to his chagrin.

Batman shows the group a clip displaying the destruction of the Daily Planet where not one person survived it. Lois is in absolute shock, yet the rest of the gang are agape. Batman notes that this Lois claims to be from Metropolis but has nothing intact from this world’s events. If anything, Batman plainly suggests that Lois came from an interdimensional portal of some sort. The crimefighting superhero duo also accuses Superman of being part of the Spider Lady’s “secret society.”

After fighting the Joker’s goons, Superman gets to the Spider Lady without any trouble. A superficial response from her embarks that she had a dream about him, about “Superman.” The Spider Lady tests out a theory that a “Doctor Atom,” a leader of some cross-dimensional secret society, turned Metropolis into a living hellhole, and that she suffers because of it. To test out the theory, Superman shoots laser beams out of the film reel.

It cuts to the present Earth-Zero continuity where Auteur.io prepares to create the “greatest of worlds,” and that Batman and Superman could do nothing to stop him.

Analysis: Once again, Yang shows off the super-heroics of the alternate and present Superman in a bright way. He brings over the same, optimistic boy scout to the rescue, while at the same time, showing off his heroism in tight spots. This Clark is quick to solve every single problem that comes his way, and it is thrilling to read. At the same time, he plays Batman in the film as the timid, non-trusting costume fighter that he usually is. The dynamics between Superman and Batman are present throughout the entirety of the issue. Yang absolutely does not miss with the intertwining of both characters.

The most intriguing character of this issue, however, is Lois Lane. She is an absolute treat to read as the tape rolls on. It is something readers should be familiar with, but her determined, yet delightful, tone helps by both brightening the story and by showing off her investigative skills.

The aesthetic given off in Batman/Superman #17 is incredibly enjoyable; the old-school style shines to where it touches the heart. Grins are given when Superman helps Lois, Robin fighting Arkham’s criminals, and Batman shows his sidekick how to upgrade the Batmobile. This all molds well for a classic superhero story.

Ivan Reis blows away on the expressions of each characters’ face on every single panel. The experimental style builds upon the previous issue and increases it furthermore with the reel burning and the sliding panels. It is so wacky and out of the box, that one cannot help but be amazed by the work he has done in this issue. There is also a noticeable difference between both the regular and old-school Batman and Superman characters. Reis plays well with the action in every scene as well, blending the film reel as well as the current time. Sabine Rich’s fiery furnace reds help finish the touches on the reels.

The lettering choices by Saida Temofonte are also done well with the new villains, the Auteur.io. The gray difference in tone bodes well against the protagonists sent out in space.

The continuing film session in Batman / Superman #17 proves Yang's worth in writing, as it will leave Batman and Superman readers hanging off the edge of their seat in suspense. 4/5