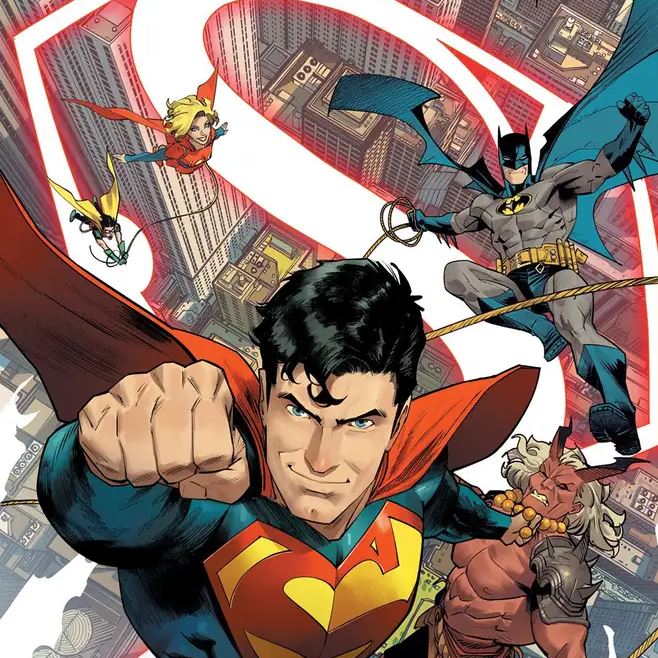 Overview: In Batman/Superman: World’s Finest #5, Batman, Superman, Supergirl, and the Doom Patrol seal away Devil Nezha for good, but not without losing one of their own.

Synopsis (spoilers ahead): As Batman/Superman: World’s Finest #5 begins, the Doom Patrol, Batman, Superman, and Supergirl stand inside the tomb of the Devil Nezha. Nezha dangles unconscious over Superman’s shoulders, but the villain is recovering fast. Supergirl reveals that the Warriors of Ji, who locked away Nezha the first time, gave her a talisman that could seal the tomb from the inside. The heroes’ only dilemma now is deciding who will stay behind and seal the tomb from the inside, thus sacrificing him or herself for the greater good.

Superman offers to sacrifice himself first. Then, Batman intervenes, as Superman is weak to magic. Rita Farr reminds both heroes that the world needs Batman and Superman. The Doom Patrol shall do it. It’s then that Supergirl cuts in, claiming to deserve the sacrifice after losing Robin (Dick Grayson) in a time storm while seeking out the Warriors of Ji.

Before the heroes can argue it out, Superman falls under Nezha’s mind control. Supergirl launches an attack against her cousin. Batman issues orders to the team, but a mind-controlled Rita Farr snatches him. Negative Man also falls under Nezha’s control.

While Superman and Supergirl duke it out, Robotman (Cliff Steele) attacks Devil Nezha. One solid punch releases Nezha’s control over the heroes. Supergirl remembers something the Warriors of Ji told her. Nezha is only prepared against weapons and materials from his era. There’s no way Nezha could prepare for the materials that make up Robotman, as those materials didn’t exist in Nezha’s time. As Supergirl calls on her cousin, Superman books it to the Fortress of Solitude.

Superman returns as quickly as he left, aiming a Kryptonian weapon at Nezha. Superman fires, blasting Nezha into the Phantom Zone. Nezha’s powers loosen all over the globe, and he disappears. It is in this break that Supergirl is finally able to tell Batman that she lost Robin in the time stream. Batman, Superman, and Supergirl begin to discuss how they can rescue Robin, but suddenly, Nezha starts to break free from the Phantom Zone.

Batman, Superman, and Supergirl stare in shock for a second. Superman leaps into action, carrying Nezha and the talisman into the tomb. Batman rushes to the door, but by the time he reaches it, the tomb is closed. Batman is left pounding on the door, screaming in anger and sadness. Supergirl joins him, and the two exchange cries of shock and pain.

Robotman tells everyone that they need to inform the others of Superman’s sacrifice, and as the team leaves, Batman stays behind. He’s analyzing the door. Robotman assumes Batman is in shock, but Rita asks what Batman is looking for.

Batman asks where the Phantom Zone projector that Superman used is. When they turn around, they see the interdimensional crack that Nezha opened when he tried to escape imprisonment in the Phantom Zone. Negative Man jumps into action and rips the crack open. A hand reaches out, and the team collectively grabs on and pulls.

They free Superman, who tells Batman that it took him long enough. Superman cheekily tells his partner that he was depending on the World’s Greatest Detective to notice something. “That’s not a gamble. That’s a plan,” Superman says.

Superman then explains that after closing the tomb, he didn’t give Nezha time to attack. He leaped right into the Phantom Zone and closed the opening behind him. The heroes bury the tomb, so no one can ever find it.

The Doom Patrol tells Batman and Superman that it’s been a pleasure to work with them, and they offer their condolences for the loss of Robin. Batman just stares on, deep in thought.

In an epilogue, a different Robin (Damian Wayne) discovers the tomb of Devil Nezha on Lazarus Island (see Damian’s Lazarus Island adventures in the most recent Robin series). This story thread will be explored in the upcoming Batman vs. Robin title.

Analysis: Batman/Superman: World’s Finest #5 ends the first arc of this relaunched series and opens the door to several more stories. One of these stories will continue in the upcoming Batman vs. Robin title, which is also written by Mark Waid. The other story will be the rescuing of Robin (Dick Grayson) from the time stream.

In this finale to the Devil Nezha arc, writer Mark Waid and artist Dan Mora end on quite the thrilling and suspenseful last battle. Waid and Mora do an excellent job of keeping readers guessing with each turn of the page as Nezha and the heroes battle back and forth, each gaining the upper hand at various points in this last encounter. The imprisonment of Nezha feels more than earned, and it’s achieved in a way that comes across as clever and unexpected. Instead of just punching this villain into submission once Robotman discovers that Nezha’s weakness is the newer energy that radiates from the Doom Patrol, Superman gambles on Batman’s wits when making the ultimate sacrifice. As a result, Nezha is imprisoned, and Superman cleverly escapes by way of entering and exiting the Phantom Zone.

Mora sells the action with incredible paneling. Admittedly, my favorite page is just after the heroes falsely assume Nezha is stuck in the Phantom Zone. As Nezha breaks free, there are three panels highlighting the surprise and shock of Batman, Supergirl, and Superman angled around the talisman that they need to seal away Nezha forever. Superman snaps into action first in the panel beneath the aforementioned shots, and it’s an all-around exciting artistic display with almost no dialogue. As a reader, we’re trusted to know what’s going on in the minds of our heroes based on their reactions and positioning around the talisman, and this artistic cue pays off.

Mora’s art is only enhanced by magnificent colors from Tamra Bonvillain. Bonvillain really lets the heroes shine brightly, and reading this issue with such a wide spectrum of vibrant colors is a treat for the eyes. Lastly, Aditya Bidihar’s lettering also enhances the tension, fear, frustration, and shock we see from our heroes, especially when they believe Superman has killed himself for the greater good. It’s rare that we, as readers, see much emotion from Batman in any book, but in this instance, it’s a well-earned display of love and camaraderie from the Dark Knight. It resonates quite beautifully.

Batman/Superman: World’s Finest #5 ends one arc only to gleefully launch into another. Overall, it’s a terrific culmination of fast-paced action, heart, and peak superheroics that harken back to a brighter era in comic books. It’s arguably one of the most fun books on the shelves.