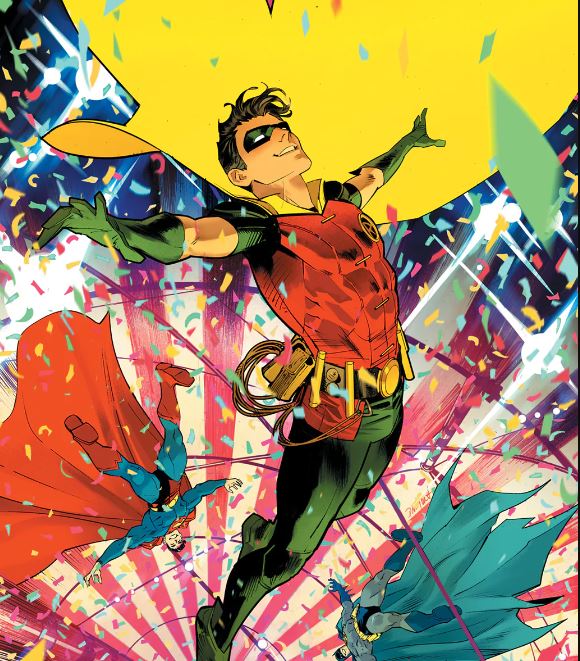 Overview: In Batman/Superman: World’s Finest #6, Batman and Superman travel back in time and help Robin solve a murder caper at the circus.

Synopsis (spoilers ahead): Batman/Superman: World’s Finest #6 begins in Corto Maltese in 1892, as Robin (Dick Grayson) finds himself once again in the circus. This time, however, he’s spending time with the Stratford World-Famous American Circus. The lion tamer, Cesar, is about to shoot his lion after the lion was alleged to have murdered someone when Robin intervenes. Dick tames the crowd, convincing the other circus employees to give him a couple of days to find out what really happened. Although everyone believes the lion and the bear are to blame, no one saw either animal hurt anybody.

Secretly, Dick does some sleuthing and analysis to discover that neither animal maimed the two murdered men. He concludes that these two men were part of a trio that arrived and joined the circus on the same day in San Diego. The third man, Charlie Boyce, is most likely the murderer.

In the present, Batman, Superman, Supergirl, and the Doom Patrol look for clues about Robin’s whereabouts. Under a rock near Devil Nezha’s tomb, Superman finds a stone that Robin carved a note into. Using X-ray eyes to trace a tachyon trail back in time, Superman and Batman travel back in time and find Robin. The two heroes go undercover as new circus acts in order to get close to Robin. Batman does acrobatics and tightrope while Superman is the circus’ strongman.

Dick tells the two heroes that he’s trying to piece together evidence proving Boyce is a murderer that the other performers would believe. His forensic approach was too twenty-first century for the people of this era.

While Batman and Robin do a high-wire routine, a fire breaks out. Robin concludes that it’s a distraction for another crime. Superman leaps to action, saving people from the fire. Batman and Robin run into danger, finding Boyce locked in a cage with the lion. The Dynamic Duo saves Boyce from being mauled, and Robin confronts Cesar, the lion tamer.

Now at the mercy of Batman and Robin, Cesar is caught. Robin puts together that the two victims and Boyce were bank robbers looking to lay low. When the second victim and Boyce bumped off the first victim, Cesar saw them. Cesar demanded to be cut in for his silence and, in time, convinced Boyce to murder the second victim. Locking Boyce in a cage was Cesar’s way of keeping that money for himself.

Robin knew Cesar didn’t really care about the animals when he saw Cesar run away from the fire, leaving the animals to burn. He also put two-and-two together when he noticed that Boyce was locked in the lion’s cage, with Cesar being the only one with the keys.

After turning over Boyce and Cesar to the proper authorities, Batman, Robin, and Superman leave the circus.

Analysis: Batman/Superman: World’s Finest #6 gives readers a break from the high-stakes action of the first five issues of this series. Although Robin is trapped in time, writer Mark Waid and artist Travis Moore use this scenario to put Robin’s sleuthing skills to work on a circus caper.

The issue is a total throwback to Silver Age comics, with Robin putting the clues together in the background, only revealing his hand at the finale of the caper. While there aren’t much in the way of stakes, the creative team uses this nineteenth-century circus thread line to humanize Dick Grayson. He’s very much a kid again in this issue, reconnecting with his love of the circus, his memories of his parents, and compassion toward animals that’s tender and also obsessed with dispelling myths about lions. Waid uses Robin’s solving of this circus caper as a way to shatter the myth about lions’ ferociousness. Even when Batman rushes to rescue Boyce from the lion, there’s a comment made about how a lion’s bite is not much stronger than a dog’s. It’s strange and seems just a little out of place, as if it is tacked on.

That said, this is a fun issue. Travis Moore does a great job complementing the style and tone set by Dan Mora in previous issues of this series. Colorist Tamra Bonvillain, who also colored previous issues of this series, helps keep the lightness of the tone and vibrancy of this issue consistent with the previous arc. There’s a zest for fun in both the coloring and artwork that comes across as gleeful as if the creative team just wanted readers to delight in the silliness of the scenario. When most other Batman books on the shelves are mired in darkness, it can be refreshing to read through a title that hearkens back to a long-gone era.

Batman/Superman: World’s Finest #6 ditches the world-ending plot of the previous arc for a gleeful one-shot that celebrates the carefree attitude of Silver Age comics.