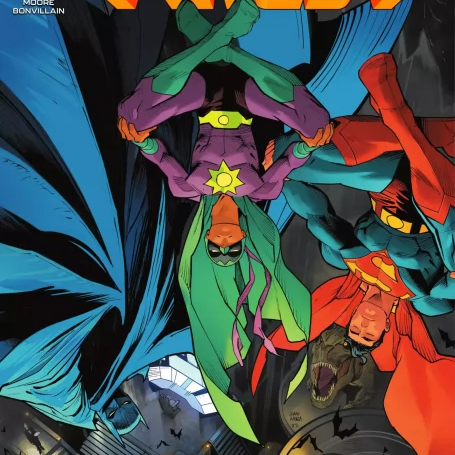 Overview: In Batman/Superman: World’s Finest #7, Batman, Robin, and Superman discover a boy from a parallel earth with superpowers. They problem-solve how to take care of him.

Synopsis (spoilers ahead): Batman/Superman: World’s Finest #7, begins in Gotham City on a doomed planet, a young boy is put into a space capsule by his scientist parents. They fire him off into the sky as their world crumbles away.

Back in the regular DC Universe, a mysterious rift opens in the sky. The Air Force heads to intercept, with Batman and Robin also heading for the rift in the Batwing. As the Batwing closes in on the rift, some sort of capsule fires out and phases through the plane. Superman catches it and brings it down to the ground.

The capsule opens, and a frightened boy is greeted by Batman, Robin, and Superman. The boy’s name is David Sikela, and he tells the heroes that his parents sent him to this world in a test probe using a hypertime drive, which can travel to alternate realities. Batman deduces that this drive works similarly to the Flash’s vibrational phasing, which explains why it phased through the Batwing.

When Superman mentions that he’d like to meet David’s parents, David delivers them grave news. His parents are dead. This throws David into a panic. He breaks down crying, and then his body suddenly turns hot. Everything around David erupts into flames.

Superman gets Batman and Robin to safety, then puts out the fire with his breath. Superman gets David to breathe. He’s going to take the boy to the Fortress of Solitude for testing. Robin comes with, but Batman stays behind to investigate the probe.

At the Fortress of Solitude, Kim-Da tells Superman that David’s cells operate similarly to Superman’s. However, David’s energy is released as intense heat or blinding light, which can be controlled with training and guidance. Kim-Da gives David a Kandorian suit that’s indestructible, so it should be able to withstand David’s powers.

Batman calls in, asking Robin to switch to the private channel. While Batman and Robin talk, David asks if there’s a Gotham on this planet. When he finds out there is, he begs to be taken there to find out if his parents are alive here.

In Gotham, David rushes to see his parents. They don’t recognize him and turn him away. Batman intercepts and tells David that these Sikelas also had a son named David. Unfortunately, their son died when he was only three years old.

At the Batcave, Batman and Superman discuss who should look after the boy. It’s decided Superman should take David on. Robin, meanwhile, tries to take David’s mind off of him losing his parents twice in one day. Robin and David take the Batcopter over to the Teen Titans.

Analysis: Batman/Superman: World’s Finest #7 launches into a new arc. This issue is much more of a slow burn compared to the last six issues, but it sets up what appears to be a multiversal adventure. A boy by the name of David makes his way from the Gotham City of a doomed planet over to the main DCU. There, he’s intercepted by Superman, Batman, and Robin, who figure out how to help him with his newfound powers, as well as train and care for him.

Much of the issue is devoted to moving from point A to B to C. A problem is introduced, and our heroes get to work problem-solving. It’s not exactly the most exciting story, but there are plenty of changes of scenery that keep readers engaged. As always, artist Dan Mora delivers some incredibly beautiful panels and really fills the space with all sorts of referential nuggets.

Early on in the issue, Jack Ryder is shown on Youtube as some sort of conspiracy theorist nutjob, which is amusing. When Robin and David take the Batcopter, it’s very much in line with the Batcopter seen famously in the ‘60s Batman TV show.

The best part of the issue, hands down, is the opener. Readers are treated to a few pages of art showcasing an origin very much similar to Superman’s. The Gotham City of this doomed planet is dark and looming and picturesque. On this world, the Daily Planet globe sits perched atop a tower in Gotham, not Metropolis. Tamra Bonvillain’s colors elevate this opener, contrasting the visuals with hues of red and black mixed with neon green. Together, Mora and Bonvillain expertly craft a moving opener where readers get everything they need to sympathize with David, who remains the focus of the issue once he lands in the DCU. David’s horror as his world shatters is heartbreaking, and it takes a whole three quick panels to convey.

The visuals throughout the rest of the issue are stunning. They just can’t compete with that opener, though there is an effort to reconnect readers throughout with David through his terrified and sad eyes.

With a new villain teased at the end of this issue, it’ll be exciting to see how all of these pieces will play into each other. With writer Mark Waid still at the helm, one can expect it to be just as much of a blast as the last several issues have been.

Batman/Superman: World’s Finest #7 gets to work setting up a new arc while allowing readers an issue to breathe after the nearly non-stop action of the previous arcs.