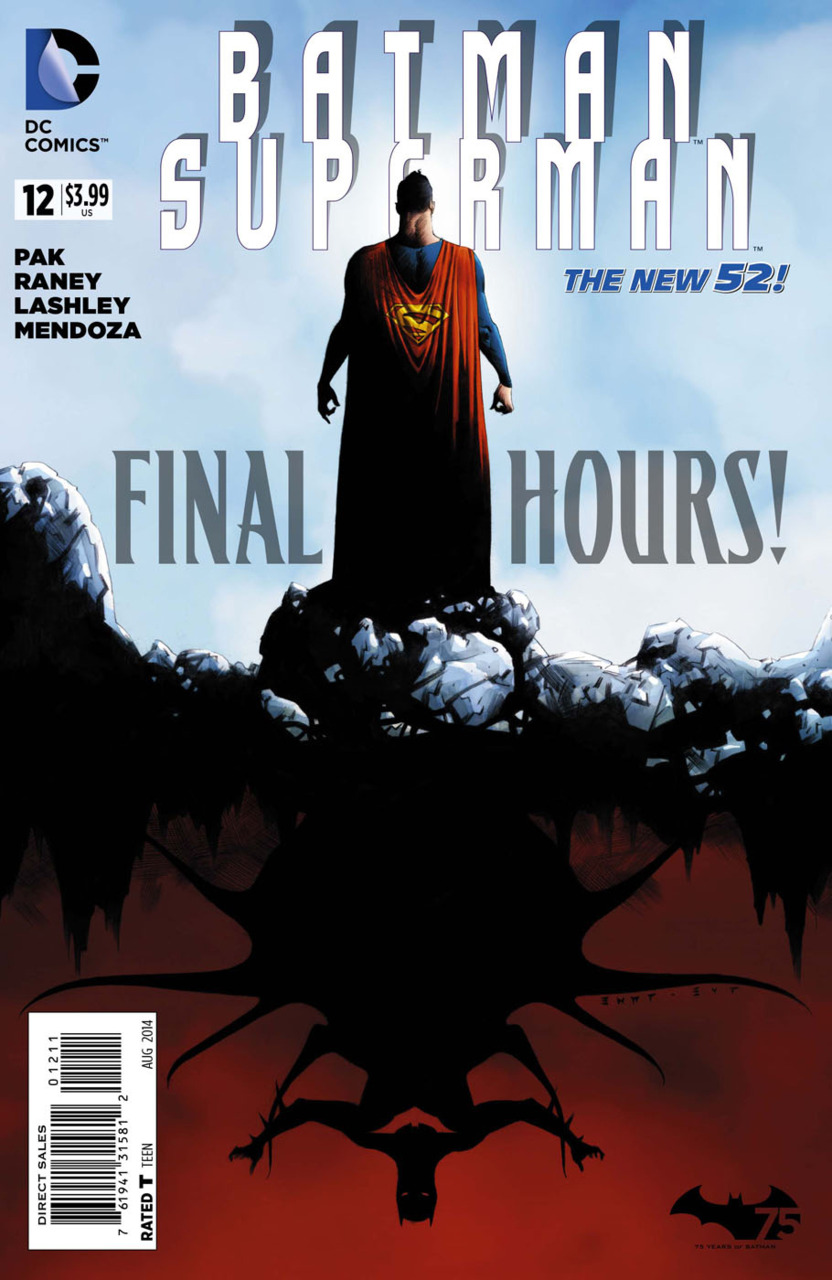 Have you ever gone through something that you wish you could take back, or do over again? We've all been there at one point or another. Whether it's one decision, or multiple, we can all relate to that. Greg Pak touches on this point right here. As you know, I haven't reviewed Batman/Superman since the Mongul/video game storyline, and I hated it mostly because of the relationship between Bruce and Clark. Bruce was a complete D-bag, and Clark extremely kind one minute, and irrational the next.

Greg Pak, I'm sorry, and I thank you for how you have made their relationship grow over the past few issues. I really enjoyed seeing these two characters interact, and why (in the past) they are referred to as "World's Finest". Pak offers us a twist on a past story that we have seen, by offering it to us from a different perspective.

Tom Raney takes care of the art for majority of the issue, while Ken Lashley gets the last few pages. Although I didn't really care for this art — it wasn't horrible, just wasn't good — it was serviceable enough, and Pak's writing shown through.

After sending off their Earth 2 daughter/cousin duo, they can't stop thinking of the adventure they had early in their careers, back on that earth. We seen how they have grown when they remember that Kaiyo the demon warned of Darkseid coming to destroy Earth 2. They (Clark especially) feels bad for leaving them to die, and wants to go back. Kaiyo hears them, appears, and sends them back telling them they have just ONE CHANCE.

They appear one Earth 2 as the war with Apocalypse is going down. Clark sees his parents, and wants to save them, but Bruce stops him, telling him that they aren't HIS parents. Earth 2 Supes shows up, and saves them. Martha tells them that he should be protecting others…meaning his wife, Lois. Supes 2 rushes to Metropolis, but he's too late, as Lois is buried in rubble. Our Superman sees this, and has the feels.

Batman is sent to watch Alfred fighting a Parademon for his life. Bruce tries to remind himself that this isn't HIS Alfred, but gives in, and saves him. This using his "One Chance".

Clark & Bruce meet up to see this earth's Trinity formulating their final plan, and Bruce tells Clark he cracked. Clark follows Batman of this Trinity to keep him safe, as he is the key to the plan. We see Bruce admit that he will die once he blows the hive to his daughter Helena. Clark knows he could save him, but does what Bruce would want, and saves Helena instead. She, and Kara fall into the portal, thus doing what happened anyway. That's right kid's, we've just witnessed a time paradox. That's what this has been all along!

Kaiyo is disappointed, saying they've gone soft, and sends them home with "a clean slate."… Did we just get a mind wipe?!

Awesome issue. It's given me faith in this series, and I look forward to the next issue. P.S. – It's two weeks from now.