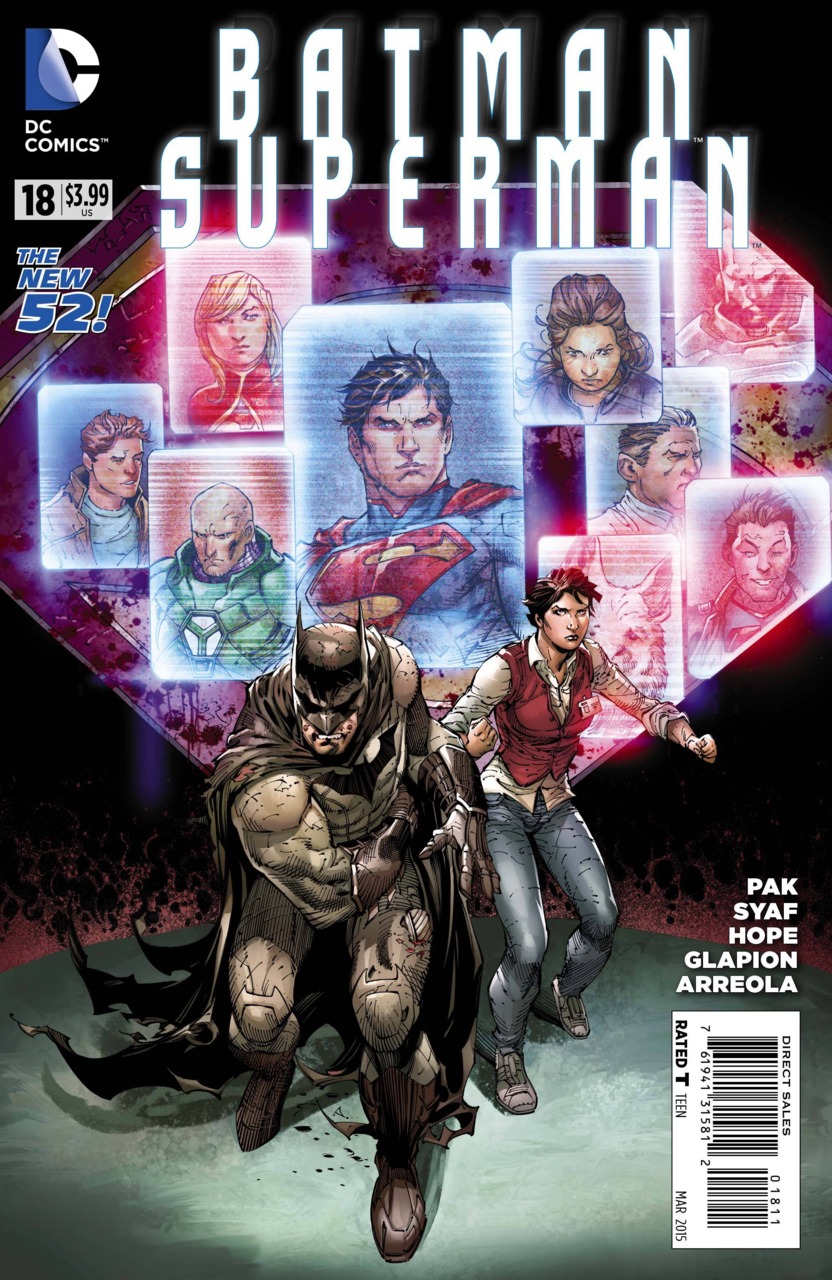 Greg Pak has been doing an amazing job with the current Batman/Superman story arc. Watching Superman face a threat that is historically reserved for Batman has been fascinating. Specifically, this arc helps the reader understand the internal struggle that Batman faces every time he is pitted against the Joker. Although the identity of Superman’s Joker remains unknown, the motives of this character remain reminiscent of Batman’s most vile adversary.

The issue opens with Superman contemplating risking the lives of an entire city of Kryptonians in order to find his Joker. The death of an innocent civilian, posing as Superman to bring joy to terminal children, has momentarily clouded Clark’s judgment. The Joker’s plan of bringing Superman’s world down around him appears to be working. A brief intervention by Supergirl helps him see the faults in his current course of action. Like Batman, Superman realizes that he cannot sacrifice his morals in the pursuit of defeating his enemy. Watching Batman lead Superman though the Joker’s motives was haunting. Recalling the tragedy that Batman has suffered at the hands of his Joker was captured beautifully in a single panel. It reminds the reader that even the world’s greatest super heroes are not immune to the devastating effects of the Joker’s actions.

We shift to find Batman in the midst of executing a plan that will force the new Joker out of hiding. However, unknown to Superman, this plan involved putting Lois Lane in harms way. Things take a turn for the worse when the bullet that we assume was for Lois strikes Batman in the chest. Superman quickly realizes that in losing Batman he would be losing his closest friend and confidant. Although these two characters are often portrayed as being hard and stoic at times, I do enjoy these little glimpses into the depth of their friendship. Things get really interesting when Superman examines the bullet that was removed from Batman’s chest armor. I will be the first to admit that the reveal of the bullet came completely out of left field. I like the direction the Pak is taking this story and feel that this plot point opens the door to a lot of really cool possibilities. The remainder of the issue is spent as Batman and Superman attempt to deduce the identity of the mysterious new Joker. It appears that with the help of The Atom are heroes are not too far off course.

The story this week was amazing. Almost as if he is attempting to one up the story, Ardian Syaf’s art is beautiful from cover to cover. Each character is exquisitely rendered. No detail, regardless of how insignificant it may seem, is overlooked and the result is evident on every page. Needless to say, this entry into the Batman Superman storyline is truly exceptional and should not be missed by any fan of the DC universe. I will be patiently waiting for the release of next month’s issue and hope that Pak and Syaf continue to push this story in the amazing direction it is currently headed.