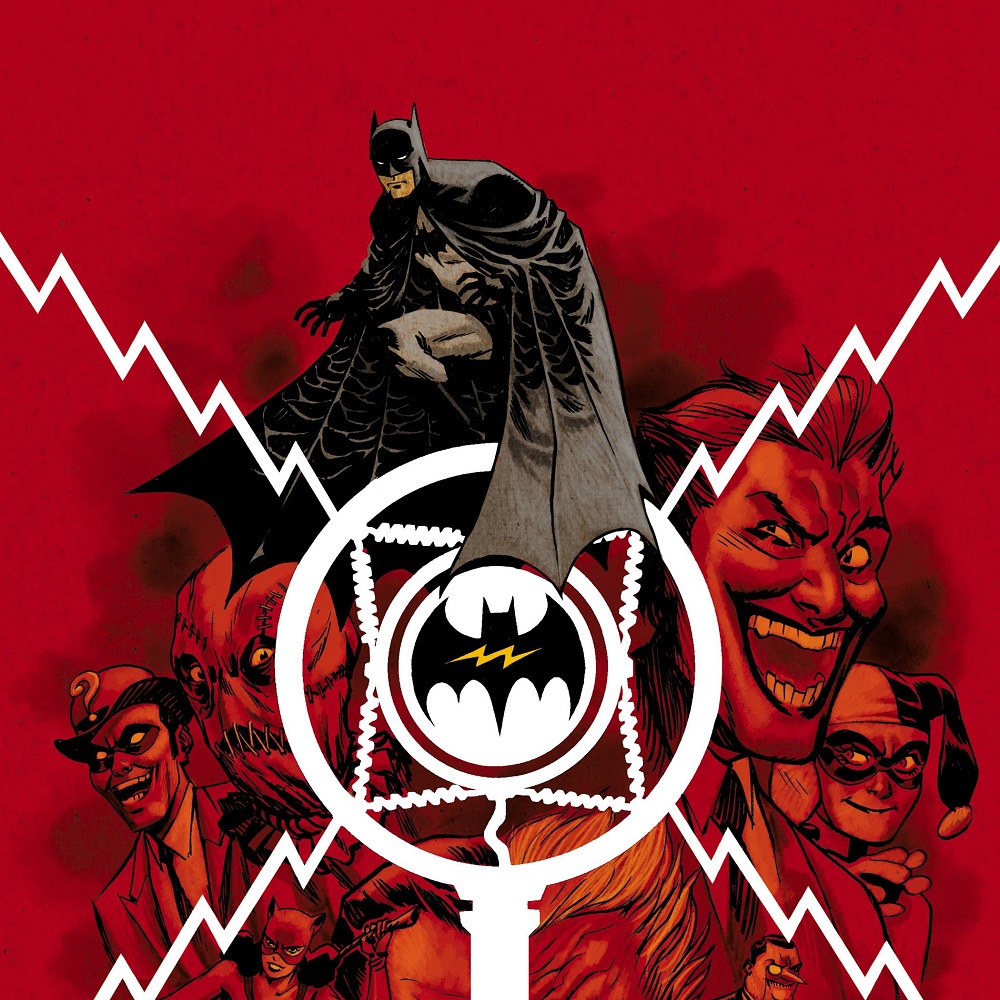 Overview: To go along with its recent release on HBO Max, Batman: The Audio Adventures #1 has been released to tie into the podcast. Written by the man behind the show, Saturday Night Live writer Dennis McNicholas, this eighty-page special features stories set in the world of the radio/podcast drama.

Synopsis: Jack Ryder gives a quick introduction that leads into the second story.

Analysis: There isn’t much here to focus on, but the art was a unique way to open the issue.

Synopsis: Batman gives chase to the Blind Mice gang. While Batman is giving chase, he is thinking about how the next day he officially becomes a consultant of the GCPD. He questions if it is the right thing to do by stepping out of the shadows and into the light. He also mentions that it is a change and any change in Gotham can bring about fear, violence, and chaos. Batman questions if he is strong enough to handle it. As he hands over some members of the Blind Mice gang to the police, more members show up to take him out but stop because Batman is backed up by more police. Finally, Batman and the Gotham City police stand shoulder to shoulder. “Change is here,” says Batman.

Analysis: This story is a great opener. It keeps the same tone as the podcast, a noir feel mixed with camp. It also gets people up to speed who haven’t listened to the show yet. The end panel of Batman standing with the police is a great ending.

Story #3: King Scimitar in “King Scimitar-Who He Is And How He Is Come To Being Now” by writer Dennis McNicholas and artist German Peralta

Synopsis: The next story in Batman: The Audio Adventures Special #1 shows us the origin of King Scimitar. Scimitar is an original character created for the podcast. Scimitar was born in Vlatava and came to Gotham to become a major player in the crime scene. When he goes to rob a bank, however, he is laughed at by the bank teller because he doesn’t have a memorable gimmick. Scimitar thinks about what gimmick he can have to be taken seriously. He brought a sword with him from back home and decided that he will become the “Cavalier of Crime.” He finally has respect until one night Batman comes crashing through his window and calls him a “d-lister” and a “Robin problem.” Scimitar takes that as disrespect, and the next time he is free, King Scimitar acquires a better sword, vowing to kill Batman.

Analysis: As I said, Scimitar is an original character created for the show, and he is an interesting new character for Batman’s Rogues Gallery. I don’t see Scimitar making a leap into the comic continuity and becoming a powerhouse like Harley Quinn, but in the hands of the right writer, any character can become a star.

Story #4: Catwoman in “She Called Pest Control!” by writer Dennis McNicholas and art by Emma Kubert

The Blind Mice gang returns in the next chapter as they report to their boss about how Batman is working with the police. The boss says he doesn’t mind that, but he is more concerned with Catwoman. As he is saying how Catwoman will steal everything from them, we see Catwoman, well, stealing everything from them. Catwoman is taking all the money and jewels, but then comes across Rupert Thorne’s daughter who is being held for ransom by the Blind Mice. Catwoman saves her but only to call Thorne and to hit him up for a “finder’s fee.”

Analysis: This was a fun story that really showed all sides of Catwoman. Over the years, no character in Gotham toes the line between hero and villain more than Catwoman. In this story, we see both sides. She’s stealing for herself, but when she comes across Thorne’s daughter she can’t help but save the girl because she knows deep down that Batman will think less of her.

Story #5: Penguin in “Bedtime For Scrambles” by writers Bobby Moynihan and Dennis McNicholas and art by Joe Mikel

Synopsis: Next, we cut to the Iceberg Lounge and Casino as singer Stoneplate Sullivan is performing for the crowd. On his break, he notices a fly in his ice water. He tries to boss the waiter to get him new ice, but the waiter says that Sullivan should get it himself. While in the basement, Sullivan is confronted by Penguin. Penguin lets him know that everywhere else he is a big deal and the star, but in Gotham, Sullivan is just a fly. Penguin also gives Sullivan the body of his dead cat as a message to let Sullivan know who is truly in charge.

Analysis: Comedian and actor Bobby Moynihan co-wrote this story about Penguin (who he also voiced in the podcast), but it is one of the weaker stories for me. I get that Oswald Cobblepot wants to be the top bird in Gotham at all times, but why does he need to threaten a nightclub singer?

Story #6: Riddler and Miss Tuesday in “What Burns When It’s Green?” by writers Heidi Gardner and Dennis McNicholas and artist Jacob Edgar

Synopsis: Riddler’s assistant Miss Tuesday is called to Arkham to help keep Edward Nygma calm as he has caused a panic in the Asylum by telling inmates that if they solve his riddle they will be rewarded with “a big stash of ice cream and puppies and guns.” Miss Tuesday talks to Riddler, and he speaks on how he hates that Gotham has not embraced his genius and instead celebrates Batman. The story ends with the inmates finding the guns, puppies, and ice cream, and Riddler smiles as he tells Miss Tuesday to clear his schedule.

Analysis: I have always considered Riddler of the top-tier Batman villains, but in recent years, he has been treated as a second or third-tier villain. This story leans into Riddler noticing that he is not as popular as Joker or Two-Face in a very smart way. Riddler knows no one respects him, and he is prepared to force people to know who he is.

Synopsis: The next story in Batman: The Audio Adventures Special #1 features Dick Grayson and his three friends Burt, Chris, and Brenton (love easter eggs like that) staying late at the library and talking about Batman. The librarian, Ms. Elliot, comes up to them to let them know that they should join the creative writing group. They say no and head home but not before they are confronted by a man who is trying to push drugs on them. They refuse, and before the dealer can attack them, the Bat-signal flashes in the sky and scares him off.

Dick, as Robin, tails the man to his hideout where he finds out they are part of the Scarecrow gang. Robin discovers that Ms. Elliot is part of the gang and pushes the drugs to kids at the writing group. Dick joins the group and sends in an anonymous tip to police as Scarecrow reveals himself and attacks with fear gas. Dick is able to get rid of the gas as Ms. Elliot is arrested, but Scarecrow escapes and will be an enemy Batman and Robin will surely face again.

Analysis: I liked this story, but it took a strange turn with the Scarecrow showing up and teaming up with an old woman to push drugs onto kids. I liked that it was Dick Grayson and not Robin that saved the day. It is definitely a story that sets up a future episode of the podcast drama.

Synopsis: Two-Face is the focus of the next story. Two-Face was one of the main characters that the podcast drama focused on. In this short story, we see Harvey Dent in constant conflict with Two-Face. They truly are a split personality, which was one of my favorite parts of the radio drama. The story ends with Harvey saving a baby from train tracks. As Batman and Commissioner Gordon go over the security tape, they notice that Harvey didn’t flip his coin to make a decision and feel that there is hope for him yet.

Analysis: Two-Face was a star of the show for me, and he is the star in one of the better stories in this book. We can see the difference between Harvey and Two-Face, and the tale ends on what all great Two-Face stories end on: hope that Harvey will one day overcome his damaged psyche.

Synopsis: Batman: The Audio Adventures #1 ends with Joker cutting out hearts for his special Valentine: Batman.

Analysis: This is a quick epilogue that teases what the Joker will be up during the Batman: The Audio Adventures podcast drama on HBO Max.

This was a really fun issue with some good stories. Dennis McNicholas has created a very unique and different world with the characters, which is difficult to do considering Batman has been around for over eighty years.