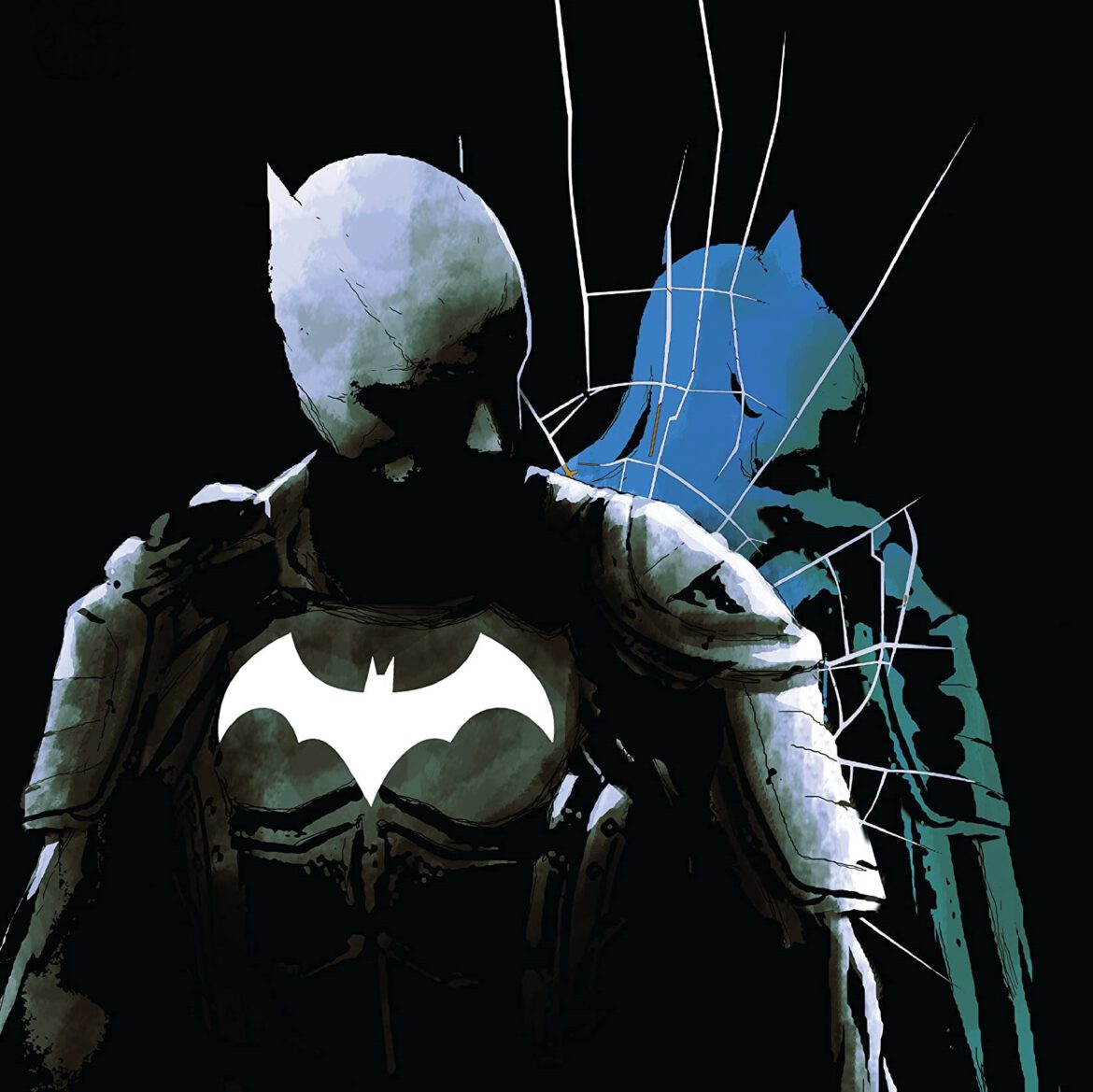 Overview:  In Batman: The Imposter, a young Batman must grapple with the emergence of an imposter who isn’t scared to use lethal force.

Editor’s Note: This collected edition includes all three issues of the miniseries Batman: The Imposter which had its first issue released in October 2021 and the final issue released in December 2021. This review focuses on the story as a whole rather than the individual issues that made up the limited series.

Synopsis (spoilers ahead):  As Batman: The Imposter begins, an injured Batman crashes into Dr. Leslie Thompkins’ place. She discovers the identity of the Batman is none other than her long-time patient, Bruce Wayne.  As he tells her how and why he came to be where he is, she makes a pact with him that she will not reveal his identity to the police so long as he comes and speaks with her every morning and when she is convinced that he isn’t a threat to himself or others.  Elsewhere, Detective Blair Wong visits Wesker Capital on police business, and Mr. Wesker tries to get her and the GCPD to speed up their investigation into the Batman. When Detective Wong returns to HQ, she is put on a task force looking into a video that allegedly shows Batman executing three criminals.

As Detective Wong continues her investigation, Bruce explains the appearance of a copycat to Dr. Thompkins.  Meanwhile, the copycat enlists the help of an innocent Ratcatcher who believes he is helping the real Batman.  Detective Wong is convinced that the Batman is a person with financial resources and visits the wealthy citizens of Gotham, including Bruce. They strike up a romance, which Bruce initiates at first out of a need to get close to the GCPD, but he actually develops genuine feelings for her fairly quickly.

While Detective Wong and Bruce get close personally, Batman and Detective Wong continue to work the case of the imposter Batman. At this point, Blair and the GCPD do not know there is an imposter, although Detective Wong becomes aware of this later near the end of her investigation.  Batman uses the police case files from Blair to trace a link between the imposter’s victims to a judge.  Mr. Wesker allows Blair to view his surveillance network to see what Batman sees when he hacks in.  Detective Wong and Batman’s path converge on Ratcatcher who Batman discovers has been helping the imposter get around via the tunnel system.  The police get to Otis first, but Batman intercepts the convoy on the return to GCPD and takes Otis himself.  Batman interrogates Otis, but finds that Ratcatcher genuinely thinks he’s helping the real Batman and is not a willing accomplice.

Bruce is wracked with guilt for fighting Blair in the process of obtaining Otis.  Otis, now back in police custody, kills himself by stealing a cop’s gun in the interrogation room and shooting himself in the head.  Batman goes back into the tunnel system to locate the imposter and finds his hideout. The imposter is there, and the two fight. The fight is interrupted by the appearance of the GCPD in the tunnels who are searching for Batman.  A heavily injured Batman escapes the tunnels and tries to make an escape via rooftops but is shot by Detective Wong.  Before she can arrest him, Batman pulls off his mask and tells her that he is being framed by an imposter.  Blair reluctantly lets Batman go, and he visits her later to tell her that he won’t fight the consequences after he takes out the imposter.  Blair is torn between turning him in and helping him but eventually decides to help him.  As they meet later on to discuss the case, a sniper shot hits Blair.  Both Batman and Blair are shot, but Batman is able to cushion their fall.  The imposter shows up and starts pummeling Batman, but Blair fires a few shots into the imposter.  Batman, who has deduced the imposter is someone on the police force, identifies the imposter and throws a Batarang into his eye.  Batman grabs the imposter before he falls off the building, but the imposter stabs Batman’s hand and falls to his death.  Detective Wong starts to arrest Batman but lets him go because she can’t say that Gotham would be better without him.

The book concludes with Blair reflecting on whether the symbol of Batman has been forever tarnished and whether the legacy will ever be the same.  Meanwhile, Batman pays a visit to a young Arnold Wesker.  Wesker is then seen visiting Dr. Thompkins’s clinic and says a “friend” sent him as he hands her a piece of paper with the Bat symbol on it.  Bruce places flowers on the graves of his parents, Blair’s parents, and Otis Flannegan.

Analysis: Mattson Tomlinson’s comic book debut takes an alternate universe look at Batman and Gotham City that appears to take inspiration from some of the grittier, more grounded Batman stories. While those adjectives have become overused when describing Batman stories, it really does feel like this story takes cues from Batman: Year One and the Christopher Nolan film trilogy. Everything from the combat, to the gadgets to Batman’s costume itself, looks like it could conceivably exist in our world. It’s perhaps no coincidence that this Batman costume looks similar to the one we will see in the upcoming film (Tomlinson lent his assistance to completing the script for the film).

The characters in this alternate Gotham are also incredibly well-rounded and three-dimensional. Dr. Thompkins is in her usual role as the proverbial angel on Bruce’s shoulder, and she is emotionally torn between her status as a helper and reluctant enabler of Bruce’s crusade. While Bruce initially appears to be standoffish and perhaps views her with a bit of condescension, the ending of the story shows how much he truly values her as well as revealing her to be just as much a cure for what ails Gotham as Batman is. Detective Wong plays a dual role as Batman’s foil and occasionally a mirror for Bruce. In their shared trauma and subsequent career choices, they each find someone who truly understands who they are. However, Detective Wong isn’t merely just a romantic interest for Bruce, she comes off as a very competent officer who is simultaneously able to project incredible toughness but also vulnerability. While his role in the story doesn’t occupy much space on the page, Otis Flannegan, who most Batman fans will know as the Ratcatcher, is portrayed as an extremely tragic and sympathetic figure. Bruce himself is a collection of intense contradictions. He is singularly focused on his mission but also genuinely into Detective Wong; he is a brutal combatant but also has clear lines he won’t cross; he is a competent fighter and detective but makes mistakes and can be beaten physically. All this makes for a compelling story.

The story works best as an action thriller in my opinion. There is a mystery and detective work element as well, as there is in most good Batman stories, but the action is where this story truly shines. Tomlinson and artist Andrea Sorrentino deliver scrappy fights and fast car chases that will keep your pulse pounding. It is perhaps the bloodiest Batman story I’ve read in some time, with mini X-ray breaks in the panels during combat sequences illustrating every time Batman sustains an injury. The detective side of things, for both Batman and Blair Wong, was adequate, although I think there were a few areas where it could have been improved.  I would have perhaps liked to see the Wesker and white-collar crime angle/connection explored a bit more.

Sorrentino’s art is fabulous, with some jaw-dropping double-page spreads full of symbolism that demand your attention long after you’ve finished reading through the page. His ability to utilize a style that evokes a classic crime thriller and transition seamlessly from intense combat sequences to emotion-filled therapy sessions or dates is quite extraordinary. Occasionally, Sorrentino gets to really flex some of the horror-inspired elements that I wish would be a greater part of Batman stories. The use of color as well is as effective as each page and panel has a particular energy and inspires a specific feeling with the reader.

While I enjoyed this story, I’m not quite sure how I feel about the ending. While it isn’t a safe, cliché ending (and it doesn’t have to be!), Tomlinson certainly does a good job drawing the story to close. I think the part about the symbol of Batman being irrevocably tarnished was a bit too bleak and simplistic for my taste. That being said, I think there’s quite a bit of emotional heft to it, and Batman taking a slightly different approach at the end with the young Arnold Wesker is a sign that perhaps things aren’t so bleak after all.

Editor’s Note: DC Comics provided TBU with copies of the original issues of this series as they released, but not of this new edition. You can find this collected edition and help support TBU in the process by purchasing this edition digitally either for Comixology through Amazon, or as a physical copy in a hardcover form at Amazon or from Things from Another World.

If you like a more grounded and down-to-earth Batman story with great action sequences and cool art, then this is a book for you.