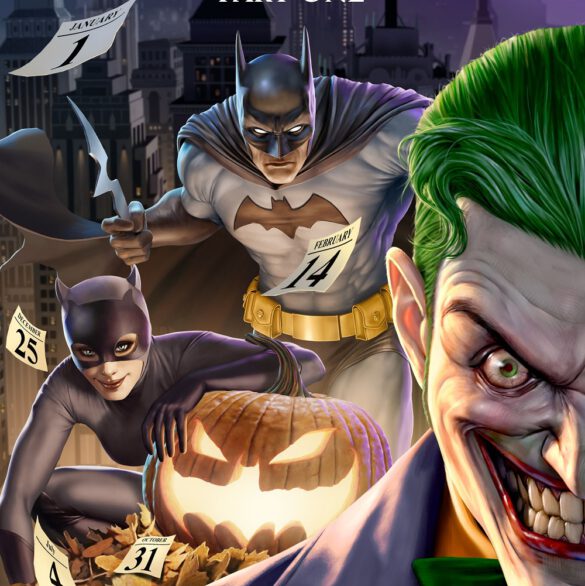 Overview: It’s finally here. Perhaps the most anticipated Batman animated movie since Batman: The Dark Knight Returns, Batman: The Long Halloween Part One has arrived. The movie has a lot of work to do to live up to the legacy of the comic storyline and, in my opinion at least, it lives up to the hype as it shows Batman, Commissioner Jim Gordon, and Harvey Dent deal with the Falcone crime family and a new killer in Gotham City.

Synopsis (spoilers ahead): The movie opens with Bruce Wayne meeting with Carmine Falcone in his penthouse. Falcone expresses his belief that he can bring order to the world of chaos and Bruce just responds by saying “I believe in Gotham City.” In a fantastic opening credit sequence, we see scenes from The Long Halloween comic intercut with scenes showing the gang war between Falcone and Sal Maroni and Harvey Dent being elected District Attorney.

On Halloween night, Johnny Vitti, Falcone’s nephew is murdered, after he had given Harvey Dent information on Carmine. Harvey Dent is home with his wife Gilda who is acting strange. Their time is cut short as the Bat-signal is now shining in the sky. Jim Gordon, whose Halloween plans with his family (including his daughter Barbara Gordon) are ruined, meets Dent and Batman on the roof of the GCPD. The three men discuss the murder while Batman points out the jack o’ lantern that was left at the scene. They also make a promise to bend the rules but not break them in their efforts to take down Falcone.

Their discussion ends early as Batman spots Catwoman and chases her. The chase leads to a Falcone warehouse that is storing mountains of cash. Harvey Dent meets them there, and they discuss what to do with the money. Catwoman suggests burning it all down which the men do after they flip a coin to decide. Dent goes home to Gilda who begs him to stay home with her. He picks her up to carry her into the house, and then the house explodes.

On Thanksgiving night, Batman chases the bomber, Mickey Chen, through Chinatown. After a fight with the Triad, Batman follows Mickey down into the sewers. Mickey is attacked by Solomon Grundy. Batman stops him and promises Grundy that he’ll never be bothered again. Batman and Gordon interrogate Mickey, but they don’t get the information they want. Harvey escapes from the hospital, and Gordon finds him outside the Falcone building. After a strange conversation with Harvey, Gordon gives him a gun to protect himself. Later that Thanksgiving night, the mysterious killer kills Mickey and his gang.

The mysterious killer is now called “Holiday.” Gordon and Batman head to Arkham Asylum to talk to the Calendar Man on Christmas Eve to see if he has any information on the Holiday killer. Calendar Man suggests the killer is either Falcone, Sal Maroni, or even Harvey Dent. Calendar Man also calls Batman’s war on crime “a joke.” Batman then heads to the Joker’s cell and sees that it is empty. Joker has escaped and attacks Harvey Dent in his home, bringing up the rumor that he is Holiday. Joker then attacks Sal Maroni’s restaurant. Batman talks to Maroni, and Sal tells Batman how the city is changing because of his villains. Next, the Joker talks to Carmine Falcone while Holiday kills Falcone’s bodyguard as Christmas begins.

In the Batcave, Bruce and Alfred go over the list of Holiday suspects while Bruce notes how he never expected to have to be a detective when he became Batman. On New Year’s Eve, Bruce is at a party on Falcone’s yacht. Selina Kyle is also there. Falcone gives a speech calling Bruce the son he never had while disrespecting his real son Alberto. Falcone has been constantly calling Alberto weak and disrespecting him throughout the movie. Jim Gordon and Harvey Dent are at Gotham Square with their wives. The Gordons notice that the Dents seem to be fighting more and more. While that is going on, the Joker steals a plane and plans to gas Gotham Square in hopes that he kills Holiday. Bruce finds out and leaves the yacht party to stop Joker, and they have their epic fight on the plane. Batman stops the plane, and while discussing the Holiday killer with Joker, he puts together that Holiday is Alberto.

Alberto is talking to Selina about how his father treats him poorly. Batman then shows up and accuses Alberto of being Holiday. Selina unwittingly reveals that Batman is Bruce Wayne but only Alberto hears. Alberto denies that he is Holiday and then is shot in the chest by what seems to be the real Holiday killer. Batman chases after the killer but can’t catch him (or her?). Batman meets with Gordon and Dent and says how he’s failed and needs to be better. Two questions remain – who is Holiday and who will Holiday’s next victim be?

In a post-credit scene, Alberto is laid to rest as Carmine approaches Bruce and asks for help. Bruce declines but is then introduced to Carmine’s associate- Poison Ivy.

Analysis: The Long Halloween comic is one of my favorite Batman stories, so I was very much looking forward to this movie. I had high expectations, and in my opinion, Batman: The Long Halloween Part One delivered. There are some changes from the source material, but the changes are very interesting. The changes work for the movie. The weirdness between Harvey and Gilda is interesting. In the comic, Carmine treats Alberto well and wants to keep him out of the family business, but in the film, Carmine is always calling him weak and treating him terribly. The implication that Alberto and Gilda had a previous relationship is a good, new addition that enhances the movie. I also like that it is not perfect, peak Batman. This is a Batman that is a few years into his career. We see this because he falls down a few times jumping from rooftops while chasing Catwoman, and he’s not as graceful. Also, he admits that he is not a good detective yet, never mind the world’s greatest detective that we all know and love. I thought these changes to the original story were good and didn’t seem jammed in.

I thought Jensen Ackles did a good job as Batman. It’s a young Batman, and he’s trying to find his voice as a hero. Josh Duhamel plays a good Harvey Dent and shows the mental strain that the Falcone case puts on him. I am looking forward to seeing his Two-Face voice. In what is sadly her last role, Naya Rivera plays Catwoman. She is similar to Ackles as Batman in that it’s early in their careers, and they are both trying to find their roles in the ever-changing Gotham City. As always, when you can’t get Mark Hamill for Joker just get Troy Baker.

I really liked the pace of the movie. Some people may not like it, but the slower pacing works for me. It really made moments and scenes soak in and gave each big moment more meaning.

This adaptation hit on some of the key moments from the comics that I wanted to see like the Batman/Joker airplane fight and Grundy enjoying a turkey dinner. The second part of the film comes out digitally and on Blu-ray in just over a month, and I can’t wait to see how it ends.

Editor’s Note: Batman: The Long Halloween Part One is now available on Digital HD and Blu-ray. You can order your copy, and help support TBU in the process, by heading over to Amazon.

Batman: The Long Halloween Part One

This slower-paced animated adaption has a few changes from the source material, but the changes serve to help create a film that delivers on high expectations for such a great story.