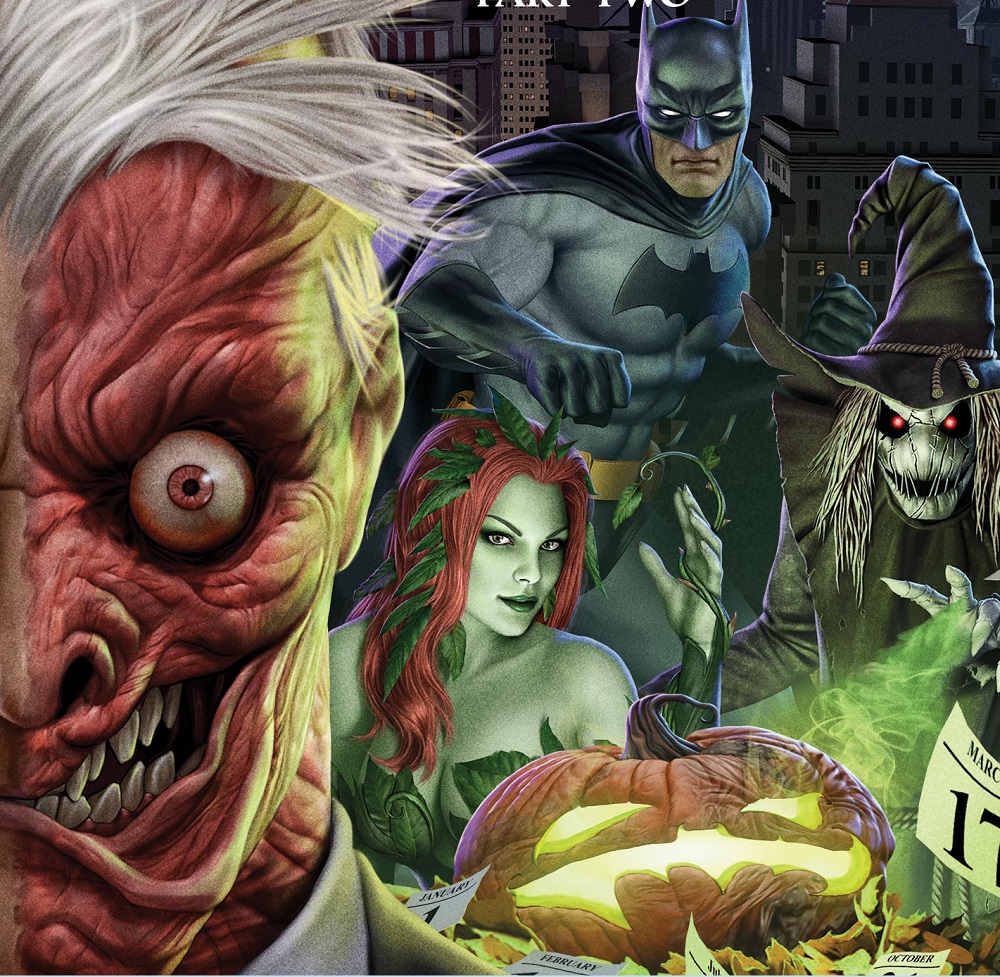 Overview: In Batman: The Long Halloween Part Two, Batman, Commissioner Jim Gordon, and Harvey Dent tackle the mystery of the Holiday killer along with ending Carmine Falcone’s criminal empire. On top of all that, Harvey seems to be crumbling mentally under the stress of both cases.

Synopsis (spoilers ahead): The movie opens where the post-credits scene in Batman: The Long Halloween Part One left off. Poison Ivy has taken control of Bruce Wayne. She has been hired by Carmine Falcone to force Bruce to sign over control of Wayne Enterprise assets to Falcone. Bruce is saved when Catwoman appears in Wayne Manor and is able to stop Ivy and free Bruce from mind control. Bruce asks how long he has been under Ivy’s control. He has been under her spell for three months and Holiday is still at large as he (or she) has struck on Valentine’s Day, St. Patrick’s Day, and April Fool’s Day.

Next month brings Mother’s Day. As Holiday strikes again, Batman takes on Scarecrow. Scarecrow tries to use his fear gas on Batman, but Batman is able to get a gas mask on. However, as Batman gets the gas mask on, Scarecrow is able to inject him with a liquid form of his fear toxin. Batman then flashes back to his parents’ murder and ends up in Crime Alley. Catwoman is able to save Batman and get him back to Wayne Manor and in Alfred’s care.

Father’s Day is the next holiday, and we see a flashback where Carmine Falcone’s father takes him to Wayne Manor to get bullets removed because he has been shot by Sal Maroni’s father. Young Bruce sees this take place, and after his father finishes, Thomas Wayne leaves with Falcone’s father. Young Bruce and Carmine have a conversation. Falcone then gives Bruce a two-headed coin.  Back in the present, Sal Maroni visits his father. While they are talking, Holiday kills the senior Mr. Maroni. Sal, distraught, heads to Harvey’s office and makes a deal with him to get Falcone once and for all.

Batman sneaks into the basement of Harvey Dent’s house and starts to suspect that he is the Holiday killer. Batman also notices an Oxford pennant in the basement and asks Jim Gordon if Harvey went there. Gordon says no.

Sal Maroni is on trial and being questioned by an increasingly erratic Harvey Dent. Harvey keeps hearing the voice in his head. Maroni then throws that famous acid in Harvey’s face, which is supposed to kill him. Harvey does not die but is horribly disfigured. Harvey escapes the hospital and goes down into the sewers and befriends Solomon Grundy. Grundy and Dent then attempt to kill Maroni while he is being transported by police. Gordon and Batman attempt to stop Harvey because they still think he is the Holiday killer. While they are at a standoff, the real Holiday shoots down Maroni. Batman attempts to give chase, but Harvey stops him. Harvey and Grundy escape.

On Halloween, Harvey and Grundy free Joker, Poison Ivy, Mad Hatter, Scarecrow, and Penguin from Arkham Asylum and storm Falcone’s high rise office. Batman and Catwoman rush in, and in an awesome fight sequence, manage to beat the villains. Sofia Falcone, Carmine’s daughter, falls to her death (or maybe not, as my Dark Victory fans out there might know) despite Catwoman trying to save her. Harvey then gets a hold of Carmine and kills him. As Carmine dies, it is revealed that he is Selina’s dad. Batman holds Carmine as he dies.

Later, Batman and Gordon meet Harvey, now calling himself Two-Face, on the roof of the GCPD. He tells them that they will need help from now on against him. Two-Face confesses that Harvey Dent committed all the Holiday murders and turns himself in.

Batman later goes to talk to Gilda Dent, who was really Holiday. She talks about her time at Oxford and how she fell in love and married Alberto Falcone and was pregnant with his child. Carmine wouldn’t let them be together and annulled their marriage and forced her to get an abortion. Gilda had an immense hatred of the Falcone family and came to Gotham to take them down. She asks if Batman will turn her in, and Batman just asks if she is done killing. She says yes, and Batman leaves.

In a post-credits scene, the Flash and Green Arrow ring the doorbell of Wayne Manor, and Alfred answers the door. Alfred lets Bruce know it’s for him.

Analysis: Batman: The Long Halloween Part Two is a worthy follow-up to Part One. I am looking forward to watching the two parts back to back as a full complete movie. One thing that I wrote about Part One that I would like to echo here is the pace of the movie. Every moment feels big because they let the moment sink in for the viewer. Both of these movies seemed longer than the usual DC animated films, which is for the better.

Part Two was more of Harvey Dent’s story than Batman’s. It felt like Batman wasn’t as big a part of Part Two as he was in Part One.  Josh Duhamel did a great job of playing the duality of Harvey/Two-Face. His Two-Face voice was very similar to Richard Moll’s voice from Batman: The Animated Series.

The changes from the comic are fine. The relationship between Gilda and Alberto is the biggest. I like that change because it gives Gilda a motive for being Holiday. The Falcones ruined her life, and now she wants them destroyed. In the comic, she becomes Holiday, so Harvey won’t have to work as much and they can start a family. One thing I did enjoy was, similar to the comic, the movie sort of left it ambiguous about Holiday. Was it both Harvey and Gilda, or did Gilda act alone?

This movie seemed to focus more on the story than action. There were really only two big action scenes, and they bookended each other. Catwoman fighting Poison Ivy in Wayne Manor at the start and then the big finale in Falcone’s penthouse. Also, the movie does leave the door open to adapt Dark Victory, which would make me very happy.

I am looking forward to when they sell an ultimate version with both parts on one disc. Both of these parts combined are great, but I wouldn’t call it the best animated Batman movie. I would still put it below Under the Red Hood, Mask of the Phantasm, and The Dark Knight Returns, but to even be in the discussion, along with those movies, is an achievement.

Editor’s Note: Batman: The Long Halloween Part Two is now available on Digital HD and will release on Blu-ray on August 10. You can order your copy, and help support TBU in the process, by heading over to Amazon.

Batman: The Long Halloween Part Two is a great follow-up that does justice to both the graphic novel upon which it's based, as well as Harvey Dent's transformation into Two-Face.