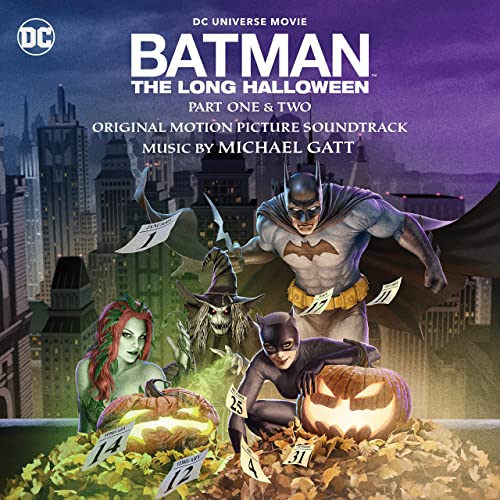 WaterTower Music has released the original motion picture score soundtrack for Batman: The Long Halloween Part One and Part Two. The score was created by Michael Gatt and features twenty-three original songs with almost an entire hour of music. Here is the tracklist:

Michael Gatt’s music is described as unique since it is created almost entirely from synthesizers and sound manipulation. The is in contrast to the film style which is a certain classic film noir style. The plan Gatt had was from the first meeting with producer Butch Lukic and describing the style of the soundtrack as: “We wanted to create something that would be signature to the world of the Long Halloween, and in that pursuit, we chose an approach that lacked any real-world or orchestral instrumentation. From there the idea arose to flip realities and that we would keep to this rule with the exception of whenever we are inside Bruce’s/Batman’s hallucinations invoked by Poison Ivy. For these moments, everything is real-world instrumentation as opposed to the rest of the film.”

Gatt has previously worked on a variety of projects including various shorts for Universal featuring characters from a number of Illumination Entertainment films. Recently, he has been scoring the DC Super Hero Girls series and is currently working on the upcoming Teen Titans Go! and DC Super Hero Girls: Mayhem in the Multiverse animated film for Warner Bros.

Batman: The Long Halloween – Part One & Two (Original Motion Picture Soundtrack) is now available digitally at retailers including Amazon. The two parts of Batman: The Long Halloween are being collected into a deluxe version including both parts in one film. You can read our review of the first part and the second part now. Both parts of the film are now available digitally and on Blu-ray at retailers nationwide.