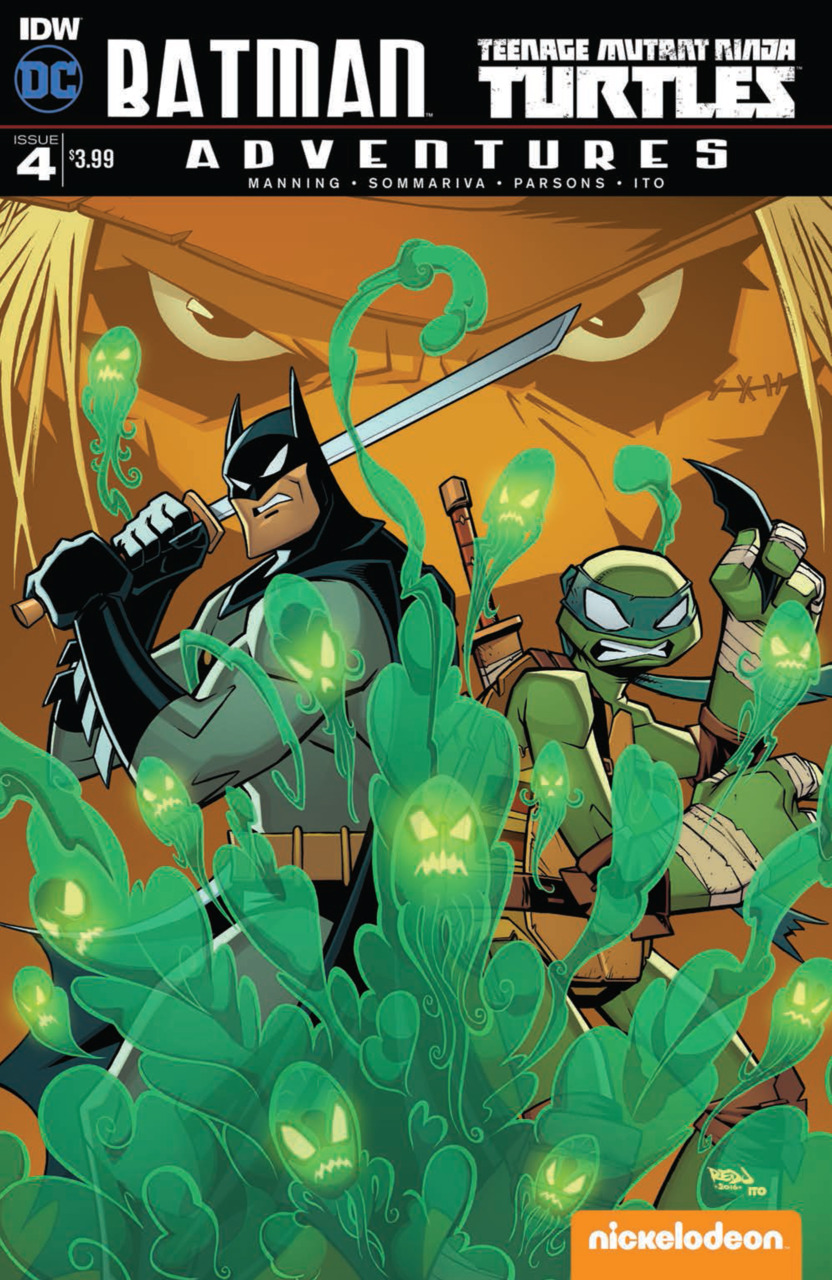 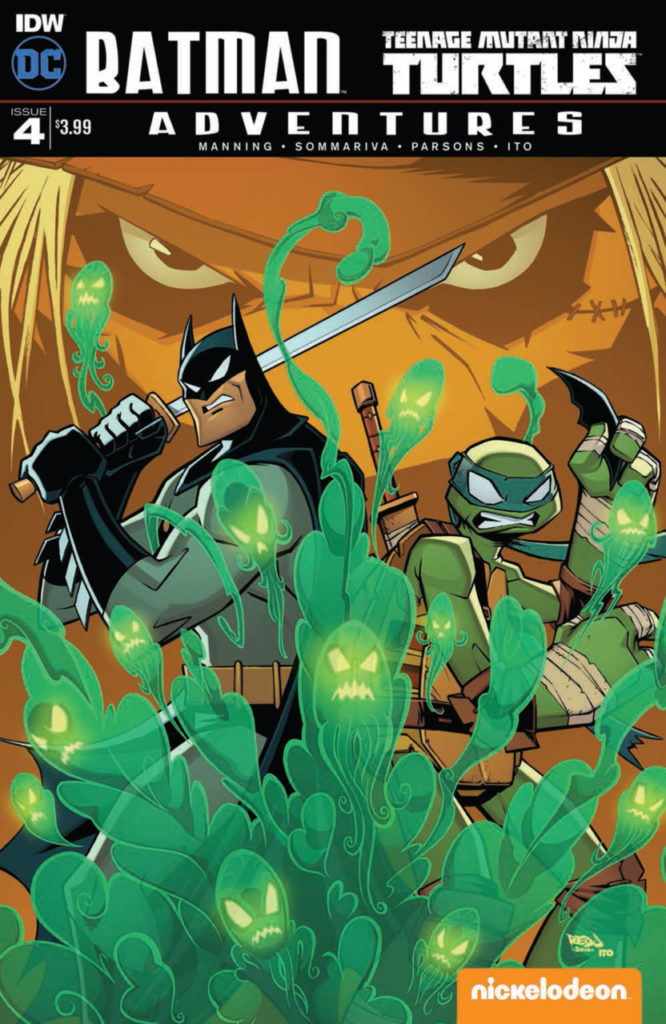 The issue opens with Batman walking through a cloud of fear gas and a panicking crowd in the East Village as he chases the Scarecrow down an alley.  Batman then discovers his gas mask has been damaged and starts to hallucinate, which gives the Scarecrow an opportunity to hit Batman with a shovel and capture him.  Meanwhile the Joker, now in control of the Foot Clan, begins stockpiling his Joker Toxin.  Robin, Batgirl, Mikey, and Donnie fight off a Foot Ninja attack on a rooftop as Donnie discovers a small device with a white rabbit logo on it. The group figure out that the Joker is controlling the Foot and radio Batman to help.  Meanwhile, Batman is chained to a wall along with Leo and Raph.  Upon hearing that that his team are going to go after the Joker, Batman escapes from his chains as the Scarecrow runs though a portal.  While Robin and Mikey guard the portals, Batgirl and Donnie attack the Foot hideout and have to fight off Harley, the Foot, and the Joker’s henchman which have been mutated into hyena men.  After getting Raph and Leo to fight through the effects of the fear gas, Batman enters the fight and confronts the Joker, which is cut short by the Shredder, who had been incapacitated by the Joker’s toxin. The Shredder manages to  fight off the effects of the toxin and knocks out the Joker.  With the Joker and Harley secured, Batman and Donnie examine the the device with the white rabbit logo, which is some sort of beacon controlling the portals.  Batman recognizes the device and the story ends with the reveal of the villain behind the portals, the Mad Hatter.

A lot happens in the issue as Manning moves the story along to get to the main villain.   As a result, the resolution to the Scarecrow and the Joker plot points feels a little rushed.  Both story lines start with fun and interesting ideas.  I loved Batman hallucinating a single panel of almost every villain from the animated series, bonus points for the inclusion of Condiment King.  The Joker messing around with mutagen is also an interesting idea.  The problem with both the Scarecrow and the Joker is that in the space provided in this issue, there isn’t enough time to devote to either villain and as a result, the resolutions to both plots feels rushed and a little anticlimactic. The Joker especially, after a couple issues of setup, to be taken out with a quick hit from behind from the Shredder is a little disappointing.  An extra issue of the Shredder taking back the Foot Clan from the Joker, and even having to team up with Batman and the Turtles, seems like a missed opportunity.

Also it’s becoming clear that this isn’t really and TMNT/Batman story so much as it is a Batman story where they meet the TMNT.  As a Batman fan, I’m not complaining, but the story as a whole seems to be very much about taking the characters from Batman: The Animated Series and letting them run amuck in a new location. The Turtles and their characters seem to be very much taking a backseat and feel more like guest stars then anything else.

I will give Manning credit for the end reveal of the Mad Hatter, which is something I never would have guessed.  I’m typically not a fan of a story randomly putting in a new character as the person behind everything without any sort of set up, but in the framework of this story with Batman’s rogues dropping in and out it works.  The Mad Hatter is a villain I’ve never really had much interest in, the only time I’ve really enjoyed the character is with some of the stuff Jeph Loeb and Tim Sale did with the character in the 90s.  That said, the animated series version of the Hatter being a deranged tech expert is an interesting choice for the mastermind behind the portals and I’m looking forward to seeing where they are going with this.

The art continues to remind everyone that you are reading something based on two animated series and Sommariva does a good job, especially with the Bat characters.

All in all, despite a few shortcuts, it’s an enjoyable read and I’m looking forward to the next issue.