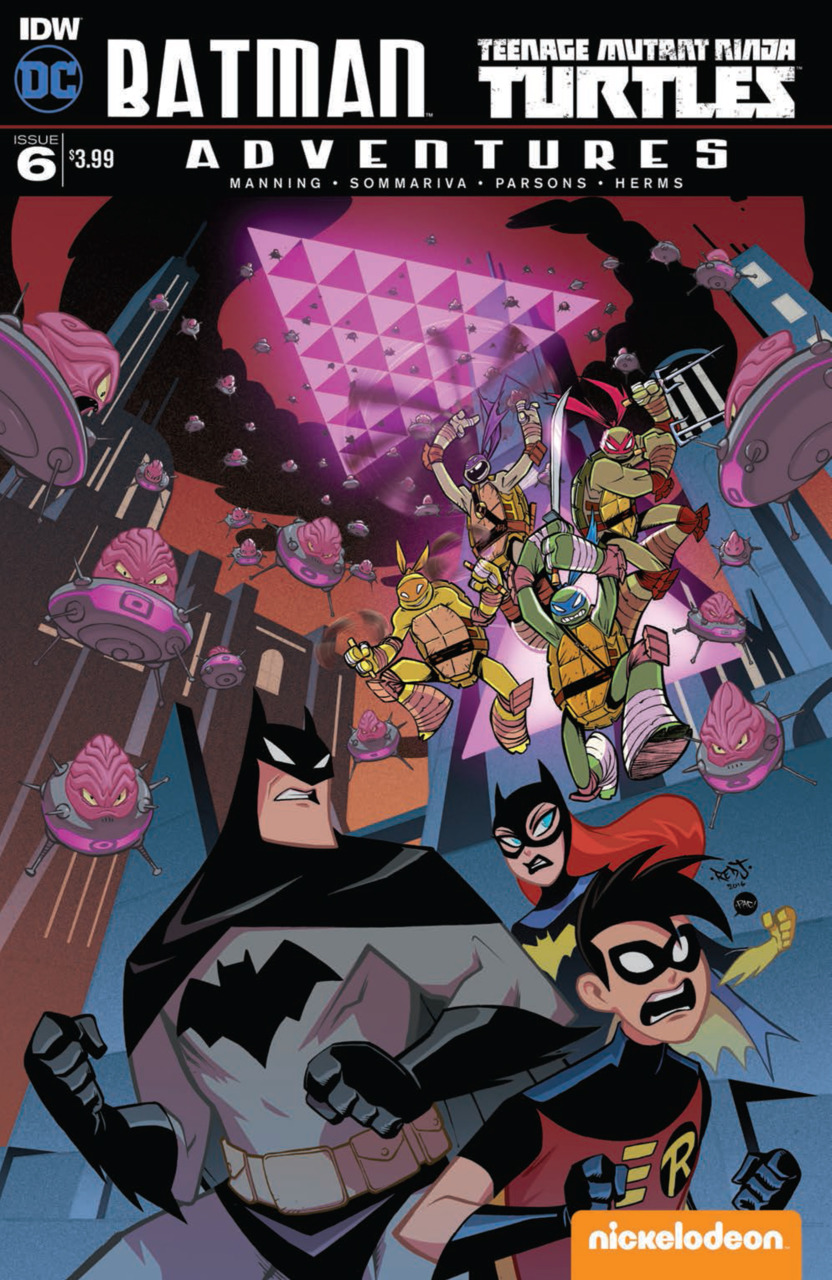 (Spoilers ahead) The issue picks up in Gotham City with some time having passed since the last issue, with the Batman character designs now taking their cues from the final season of Batman: The Animated Series. Bruce Wayne is at a Film Festival with Tim Drake when an explosion goes off and the city is overrun with an attack by the Kraang. Batman and Robin are joined by Batgirl to respond to this attack and they are quickly surrounded. The Teenage Mutant Ninja Turtles come to their rescue and the fight is on again in the streets of Gotham against the Kraang. They quickly explain that the Kraang were alerted to the Mad Hatter hacking their portals and have tracked the signal back to Gotham. It’s revealed that Scarecrow developed a fear toxin that would neutralize the Kraang and has prepared for this invasion by filling the Gotham City Police Blimps with the gas. The team manage to release the gas on the city and the Kraang are defeated and leave through their portals. Batman and the Turtles say their goodbyes and go their separate ways.

This is the final issue of this miniseries. It doesn’t really wrap up loose ends so much as just fit in one last stand alone adventure before bringing the series to a close. The story has a very rushed quality to it and could have served as the basis for an entire second miniseries instead of a final issue of this series. The issue doesn’t really add anything to the larger story established in the previous issues. The whole series has had a rushed quality to it and I think that Manning would have been better served to take the time to flush out the larger story instead of saving an issue for this story. It’s almost as if the creative team had another six issue miniseries planned for the series that was cancelled so they turned into the final issue of this series. As a result, the story moves along without taking the time to set it up properly. Scarecrow and his fear gas are perfectly good plot devices to deal with a Kraang invasion, for instance, but there’s little explanation given as to why the characters would go to Scarecrow for help and it’s a bit too convenient that he was preparing for this day by filling the city blimps with fear gas.

Manning and Sommariva have clearly been having a blast playing in the world of both franchises, but there is a clear focus on Batman: The Animated Series with the TMNT taking a back seat to the Bat-characters. Its hard to blame the creative team for their enthusiasm, but it’s as if the creative team set certain benchmarks that they wanted to hit regardless of whether or not there was a reason for them to be in the story.

While rushed, the story does maintain the energy that has been evident throughout the story. The series has been a love letter to Batman: The Animated Series and it’s hard to not enjoy seeing the series brought to life. I did enjoy seeing this version of Gotham, blimps and all, in the story. While the Ninja Turtles are clearly supporting characters in this story, Raphael does get a nice moment at the finally overcoming his crippling fear of insects to defeat the Kraang which does call back nicely to the earlier issues as well as the Turtles animated series.

Sommariva continues to do a good job incorporating the designs of Bruce Timm into his art and he does a good job of updating the looks of the Batman characters to the later episodes of the series in a way that feels natural with the art in the rest of the series.

In summary, this issue is very much like the series on the whole. It gets by less on plot or story, and more on the sheer enthusiasm the creative team has for these characters. It remains an enjoyable read and is worthwhile for anyone who’s wished for new episodes of Batman: The Animated Series.