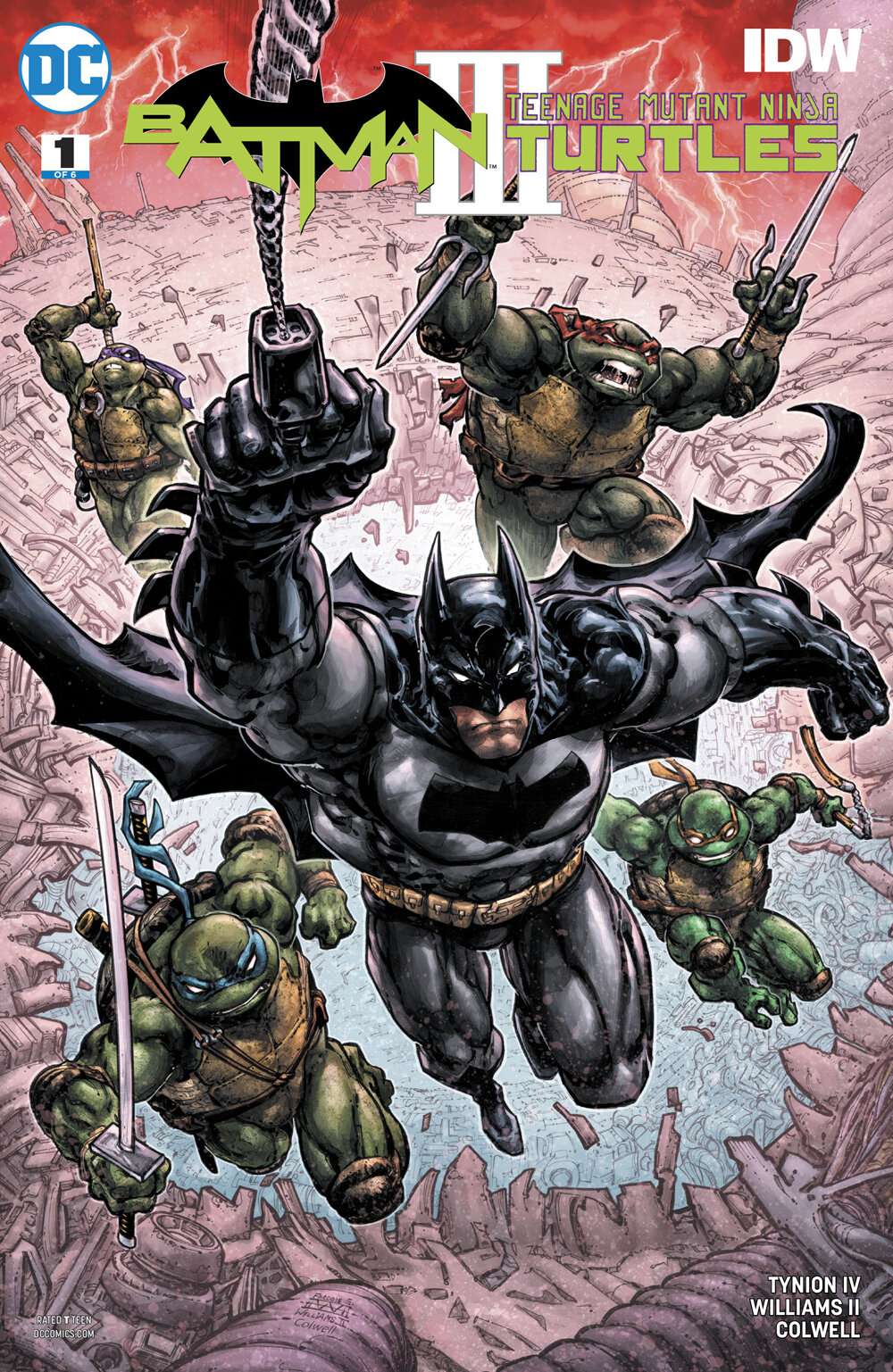 Overview: Batman and the Ninja Turtles try and stop a robbery by the Smile Clan, but all is not what it seems.

Synopsis (spoilers ahead): In the midst of an unnatural storm, Batman gets an alert that the Smile Clan is staging a robbery at the Natural History Museum.  He asks the family to meet him at the scene of the crime.

A lightning bolt hits the ground and an unknown figure asks a homeless man for his trench coat.

At the robbery, Harley Quinn, Clayface, Deadshot and Croc hold everyone hostage as they wait for their boss to get there.  On a balcony above, Commissioner Gordon calls for his men to take the shot but no one answers on the radio.  Gordon is then ambushed by the Laughing Man who reveals that all of Gordon’s men joined the Smile Clan.  Batman arrives and engages the Laughing Man in combat.  He is joined by his “family”, the Ninja Turtles, who take out all the other villains.  The Laughing Man hits Batman in the face with a stone that comes from another dimension and Batman appears to see a split version of the Laughing Man who he calls the Joker.  The Smile Clan flees the scene, leaving the Turtles to retreat with a confused Batman.

Commissioner Gordon and the only one of his officers who didn’t take the Laughing Man’s offer, survey the damage and realize that the Laughing Man got away with the stone.  The officer’s name is Casey Jones and they have a discussion about how the world seems wrong.  The unknown figure in a trench coat watches from the shadows and agrees with them.

The Turtles get pizza as Bruce meditates on what happened.  Bruce expresses concerns that the current reality isn’t real.  He says he has dreams about fighting alongside a young human and that he somehow knew the Joker he saw briefly after being hit with the stone.  His butler, Master Splinter, tries to reassure him that his life is real and good and the Turtles are also there for support.  At that moment, an intruder enters the Batcave and says that the world is wrong and they all know it.  The intruder is revealed to be the figure in the trench coat who is actually a Turtle from another dimension.

In some type of aerial craft high in the midst of the storm, Krang receives a report that Raphael is on New Earth Prime.  He threatens that it’s time they all understood the implications of Krang’s multiverse.

Analysis: This issue is part one in a new story featuring Batman and the Turtles.  For those who may have just picked up this book and liked it, I highly recommend picking up the first two volumes which I really enjoyed.  This story appears to be one that you can read without having read the first two volumes, but even so, I feel you’ll enjoy this one even more if you’ve read the first two.  For those who have read the first two volumes, this story starts with a concept we have never seen before.  We have seen Batman and the Turtles crossing over to each other’s respective Earths, but we’ve never seen a fusion of the two as we see here.  The concept is incredibly creative and works really well in my opinion.  I was a bit lost at first, but it was in a good way where I really wanted to understand what was going on because it was interesting.

I’d like to applaud the character designs of all the “fusion characters”.  All of them are a really seamless blend of the Turtle universe and the Batman universe.  The Laughing Man was definitely my favorite because I don’t recall ever seeing a new villain that I thought looked cooler while also being so menacing.

The character designs weren’t the only thing that was amazing; the art was also incredible.  The pages where we first see Batman and then see him grapple away were classic Batman pages.  It’s all appropriately dramatic where you can feel him brooding with the ominous storm in the background.

The characterizations and personalities of the individual characters were also very accurate.  I suppose that’s to be expected given that these creators have spent so much time with these characters.  Master Splinter as Alfred was a surprise, but it made complete sense.  I thought it was hilarious that the Batcave came with a built-in pizza delivery chute and featured a Triceraton statue instead of a T Rex.

The big cliffhanger comes in the form of a version of Raphael from another universe who crashes the party to tell them that everything isn’t right.  The way he’s drawn also makes it seem like he’s breaking the fourth wall and promising the reader that the story will only get better from here.  We know that Krang is the big villain behind it all and that he’s manipulating the multiverse for his own nefarious purposes.  It’s not clear if the Laughing Man is in league with Krang or not, but I suspect the stone from another dimension will be an important piece in this story.  I’m really looking forward to seeing where this very ambitious crossover goes next.

Final Thoughts: This is a great introduction to a very creative story illustrated with gorgeous artwork.  Definitely a book you want to pick up.